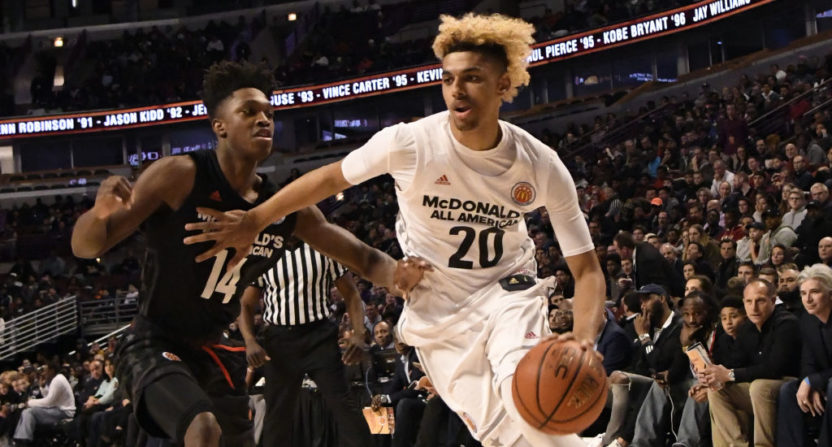 The 2017-2018 basketball season has been a long, strange trip for the Louisville Cardinals and we’re not even in December yet.

Rick Pitino is gone and the FBI investigation that drove him out of town will have lasting effects on the program. The Comeback’s Michael Grant recently wrote about what is sure to be “the most bizarre season in Louisville basketball history.” Before everything went down, the Cardinals were seen as one of the front-runners for the ACC crown and could very well be considered a Top 10 team. They may still indeed do very well (they’re off to a 3-0 start so far), but decisions such as what to do about freshman Brian Bowen loomed large over the squad and it’s future.

Bowen, the “surprise” commitment that Louisville received back in June, is now understood to be the player whose family received a $100,000 signing bonus courtesy of Adidas on behalf of Louisville. Bowen, who has denied knowledge of the payment, was cleared by the FBI of any “investigative impediments” back in November but the five-star small forward was banned from participating in team activities ever since the investigation was revealed. What everyone wanted to know is whether or not Louisville would eventually reinstate their star freshman following an internal investigation, something that would have to be approved by the NCAA.

Wednesday, just in time for Bowen to have a lovely Thanksgiving meal with his family, Louisville announced that they would make his exile from the basketball program permanent.

Brian Bowen will not play at the University of Louisville. He may remain on scholarship but will not be allowed to practice or compete pic.twitter.com/R04h5R58pR

If he chooses to remain at Louisville for the remainder of the year, Bowen will still receive his athletics scholarship. However, he is now persona non grata when it comes to anything to do with the basketball program. The school did say that it will grant Bowen his release if he would rather transfer or simply leave.

As for what Bowen does from here, it seems silly to even bother attempting to transfer to another school. While this kid is the “bad guy” in that he allegedly took money to commit to Louisville, there was a whole slew of adults involved in that transaction who should have known better and treated the kid like the commodity they see him as. Why in the world should he step back into that world, especially considering the $100,00 he received to play for the Cardinals was almost certainly a bargain far below his market value?

The NBA won’t care about any of this. There will be pro franchises lining up to draft Bowen in 2018 regardless of this mess. He’s not in trouble with the law and whatever happens now is between Louisville, the NCAA, and the FBI. He’s essentially a free agent and he should act accordingly. $100,000 is nothing compared to the kind of money he could be making this time next year if he just commits to taking care of himself between now and the NBA Draft. To do anything else would be asinine.

Plenty of college athletes have gone down this road before and come out fairly clean in the pros, including Cam Newton, Reggie Bush, A.J. Green, and O.J. Mayo. All of them received money or benefits, which affected their status as college athletes. From there, they all went on to have long, and often successful, pro careers. Their reputations might have suffered on one level, but they were able to soothe those concerns with the millions of dollars they earned in the NFL and NBA. We can debate the morality and ethics of it all, but the truth is that ultimately no one cares if you can play and the same will go for Bowen if and when he goes pro.

The alternative is to stay within the NCAA system where there’s a decent chance Bowen’s eligibility will always be an issue. He might have a tough time even finding a high-profile program that will take him, not to mention he’ll almost certainly have to sit out an entire year, delaying his pro career and the millions that come with it even further.

Whether you see Bowen as a bad guy or as a talented kid who tried to take advantage of a system set up to take advantage of him is up to you. Now, the direction of his basketball career is entirely up to him. Louisville simply did him a favor by cutting him loose and giving back that choice.