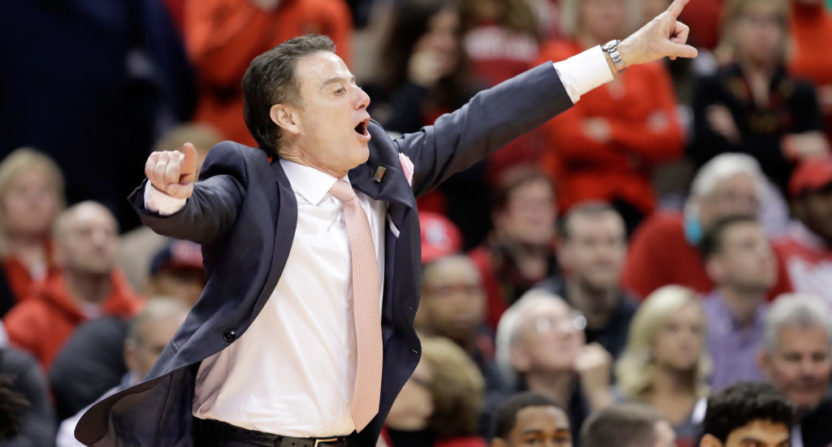 What the University of Louisville did in the current ongoing scandal that has shaken college basketball to its core was horrible. Allegedly paying $100,000 for a recruit is a major violation of NCAA rules.

But here’s the thing: the Cardinals don’t deserve the death penalty because other schools were also involved in the wrongdoing that an FBI investigation uncovered.

Also, Louisville’s basketball program does not deserve to be hammered with the death penalty because Baylor and Penn State didn’t receive that kind of punishment after the scandals those football programs perpetrated.

If you haven’t taken the time to watch the fantastic ESPN 30 for 30 documentary Pony Excess, you should when contemplating your own opinion about whether or not the Cardinals deserve the NCAA’s ultimate punishment.

The film, released in 2011, chronicles the events that occurred before, during, and after Southern Methodist University was slapped with the death penalty by the NCAA in the 1980s. When SMU was given the punishment, it had been engaging in a pay for play scenario similar to the one Louisville and the other schools in the FBI probe currently find themselves in.

But the biggest difference between the Mustangs’ scenario and the current one in college basketball is that the school had been sanctioned multiple times over the previous couple of years for similar violations. Eventually, the NCAA had no choice but to give SMU its toughest penalty.

The result was massive. SMU was banned from the 1987 college football season. They didn’t have home games the following year and the school eventually canceled the 1988 season. The program didn’t return to a bowl game until 2009. In a way, the Mustangs are still recovering from the death penalty. To this day, Southern Methodist is the most recent D-1 school to be given the NCAA’s harshest punishment.

The events that culminated over decades in Dallas show us why the NCAA is hesitant to hand another school the death penalty. In today’s world, if a massive Division 1 program were to be given such a sentence, not only would the athletic department be crippled, but the education system in place at the school could possibly suffer as well.

This could be the exact reason why the NCAA has not given a death penalty since, most notably to either Baylor or Penn State.

Once again, what Louisville allegedly engaged in over the past couple years in its pay for play scandal and the previous stripper issue that resulted in them being stripped of the 2013 title is horrible. The program deserves massive penalties for all the rules that were broken and everything dirty that was engaged in, but the death penalty is excessive. Looked at what happened to SMU and the damage that could be suffered in Louisville’s athletic department and the school itself. Such punishment is also too much because what happened at Penn State and Baylor was far worse.

In 2011, an investigation resulted in the discovery that from 1994 to 2009, over a period of 15 years, Penn State assistant football coach Jerry Sandusky engaged in child molestation. In fact, some people questioned whether Sandusky’s abuse occurred as far back as the 1970s.

Ultimately, Sandusky was guilty on 45 of 48 counts brought against him in court. Sandusky currently sits in jail while former head coach Joe Paterno watched his entire legacy become stained prior to his passing.

From 2012 to 2016, players on the Baylor University football team took part in repeated alleged rapes and sexual assaults. Finally in 2016, the program unraveled, leading to the eventual dismissal of head coach Art Briles and the resignations of president Ken Starr and athletic director Ian McCaw.

In Pennsylvania, Penn State had wins taken away temporarily and lost a number of scholarships over a couple of years. Eventually, the program recovered and a couple years later, is the No. 4 team in the nation under coach James Franklin. In Texas, Baylor hasn’t received any serious penalties yet, but its football team is struggling to the tune of an 0-4 record.

What happened at both schools was horrible and much, much worse than what happened at Louisville. So if Penn State and Baylor didn’t receive the death penalty for looking away from child abuse and rape scandals, why should Louisville be hammered for paying for recruits?

At its core, the NCAA wants to create an even playing field and wants all of its teams to be competing for the same players evenly. When the Cardinals worked around this and snuck some cash into the pockets of a recruit, they effectively broke one of the NCAA’s most sacred rules.

But while paying for recruits is bad, looking the other way from child abuse and sexual assault is far worse. Let’s be frank, plenty of schools take part in pay for play scandals every year. Not to mention, there are other schools involved in the same one Louisville finds itself in.

However, when you look back at the history of the NCAA, not often do you find schools in the midst of child abuse and sexual assault scandals as massive as the ones the Nittany Lions and Bears went through. If Penn State and Baylor didn’t receive the NCAA’s ultimate punishment for what they did, then Louisville doesn’t either.

There is a case that could be made that the Cardinals deserve the death penalty because the Mustangs were given the NCAA’s worst punishment for similar practices. Once again, if the NCAA gives a school the death penalty for paying for recruits, but doesn’t hand down the death penalty to schools that ignored child abuse and sexual assault, the NCAA has bigger issues for what it considers death penalty worthy.

At the same time, if the NCAA wants to slap someone with a death penalty, Rick Pitino deserves it. Don’t just let the Cardinals fire him. Instead, the NCAA can make a statement and ban him from college basketball. In 2013, there was talk that Rick Pitino could be one of the greatest college basketball coaches ever. Four years later, people are discussing if he’s one of the most corrupt to ever coach.