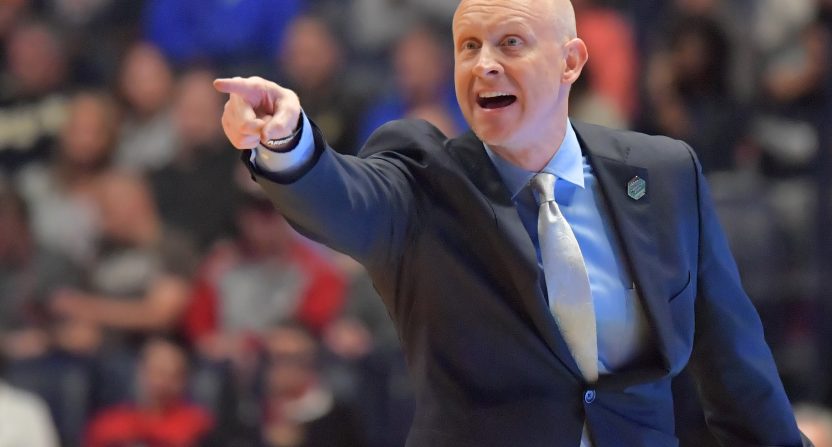 In college basketball every team is angling for a scheduling advantage. It’s an art as much as a science. There are different philosophies when it comes to non-conference scheduling. Some schools go for the gusto while others are cowards. Non-conference schedules are where teams can jockey for position for NCAA tournament bids and seeding.

Here’s a look at what teams among the six major conferences challenged themselves. Also, the teams that didn’t.

Chris Mack’s first season features one of the toughest non-conference schedules in Louisville history. It might be too difficult for a program that’s rebuilding with its third coach in as many seasons. The Cardinals could play one of the hardest back-to-back-to-back-to-backs in the nation. The Cardinals will play Tennessee in the preseason NIT along with either Kansas or Marquette.  After that, they will go home to face Michigan State before visiting Seton Hall.

Ouch. We haven’t even mentioned the trip to Indiana. Mack is either certifiable or bold for running through this gauntlet. Louisville should be battle-tested when the ACC slate starts.

Yes, the Hurricanes will play NCAA tournament team Penn at The Palestra. But the rest of the slate is underwhelming. They’re in the Wooden Legacy where the most impressive team they might face is Seton Hall. And there’s no guarantee that will happen.

Seton Hall plays in the Big East, but it could play four Big Ten teams in the non-conference (Nebraska, Maryland, Rutgers, and Northwestern). This is ambitious. Coach Kevin Willard is trying to capitalize on the momentum from last season when the Pirates beat North Carolina State in the NCAA tournament before losing to Kansas 83-79.

The marquee game will be against Kentucky at Madison Square Garden. These schools haven’t met since the 1988 Great Alaska Shootout. Seton Hall also has a home game against Louisville. New Louisville coach and former Xavier coach Chris Mack should be quite familiar with Seton Hall’s personnel.

The biggest matchup will be its lone road trip, playing at a fellow bad NYC-area basketball program. Chris Mullin (38-60) is in his fourth season with the Red Storm. The results have been as expected. If St. John’s doesn’t show progress, it might be time to pull the plug.

Not surprising that once again, Michigan State leads the way in Big Ten non-conference scheduling. Under Tom Izzo, the Spartans have usually challenged themselves early. Michigan State opens the season versus Kansas as part of the Champions Classic in Indianapolis. Later, the Spartans will take on UCLA in the Las Vegas Invitational with a second game the following day against either Texas or North Carolina.

The hardest stretch will be in December. Over a 12-day span — with two Big Ten games (at Rutgers, home versus. Iowa) in the middle — Michigan State will go to Louisville on Nov. 27 and visit Florida on Dec. 8. That’s as tough a December stretch of games as you’re going to find. Note: This season, Big Ten teams will be playing a 20-game conference slate.

This is ridiculous. Northwestern doesn’t play one true non-conference road game. It’s one thing for Duke to do this. It’s another when you’re Northwestern. The Wildcats are in the Wooden Legacy, but one bad loss and Northwestern could wind up playing lukewarm competition in that tournament. The home schedule has Georgia Tech and Oklahoma- both might not be NCAA tournament quality. Northwestern’s chances of scoring at impressive non-conference win seem unlikely.

This is no-fear scheduling. Kansas clearly expects to contend for the No.1 overall seed for the NCAA tournament. It’s loaded with challenges. The highlight is defending national champion Villanova coming to Allen Fieldhouse. This is a rematch of the Final Four game from last spring- a 95-79 semifinal loss to the Wildcats. Kansas opens the season against Michigan State in the Champions Classic. It also has neutral site games against Marquette and either Louisville or Tennessee in the preseason NIT.

Two games that will also be fun to watch will be trips to Arizona State and Kentucky in the SEC/Big 12 Challenge.

For a team coming off an Elite Eight appearance, this is weak sauce. Sure, it’s an improvement over last year when it was among the worst in the nation (rated No. 324 by KenPom). But this schedule still is lacking. The toughest game might be versus Vanderbilt and that game is in Kansas City. The Wildcats are in the Paradise Jam and will face Eastern Kentucky, either Northern Iowa or Penn, and potentially Missouri. This is not good enough.

Stanford’s non-conference schedule will also be beefed up by its trip to the Bahamas for the Battle 4 Atlantis. The Cardinal will open up against Wisconsin and could play the winner of the Florida vs. Oklahoma game. It could meet Virginia in the title game.

Any time you play both North Carolina and Duke in the non-conference schedule, you can’t knock it. Kentucky opens the season versus Duke in the Champions Classic. That could be a potential national championship match up in the spring. The Wildcats will then face North Carolina in late December in the CBS Sports Classic in Chicago.

Immediately following that titanic tilt is the annual Commonwealth rivalry game at the University of Louisville. It’ll be a little less glamorous than when Rick Pitino and John Calipari faced off, but it’s usually a great and difficult environment. There’s also a neutral site matchup with Seton Hall and a home game against Utah.

Missouri’s schedule isn’t terrible, but it isn’t terribly exciting either. The Tigers travel to rebuilding Iowa State. That is their lone road trip. It will play in the Paradise Jam where the field includes Old Dominion, Oregon State, Northern Iowa, Penn, Eastern Kentucky, and Kansas State. Missouri’s marquee home game is versus Xavier, and they will play Illinois on a neutral court in St. Louis.