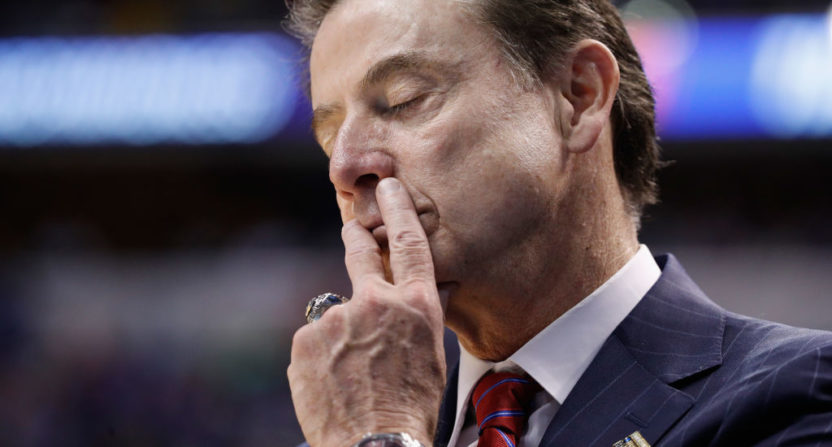 The NCAA released their final sanctions for the University of Louisville this afternoon, and the penalties include vacating wins from the 2011-2012 season through 2014-2015. That includes Louisville’s 2013 national championship, the first NCAA men’s basketball championship to ever be vacated.

Via the NCAA’s release:

Louisville must vacate men’s basketball records in which student-athletes competed while ineligible during the 2011-12 through 2014-15 academic years according to a decision issued by the NCAA Division I Infractions Appeals Committee. The appeals committee also upheld the NCAA Division I Committee on Infractions penalty that requires the university to return to the NCAA money received through conference revenue sharing for its appearances in the 2012, 2013, 2014 and 2015 NCAA Division I Men’s Basketball Championships.

This is not a surprise, by the way.

It’s not a surprise given the widespread nature of the infractions, as well as the salaciousness involved. This is from the actual NCAA release again:

In the Committee on Infractions’ decision, the panel found that a former Louisville director of basketball operations acted unethically when he committed serious violations by arranging striptease dances and sex acts for prospects, student-athletes and others, and did not cooperate with the investigation. The violations in the case resulted in some men’s basketball student-athletes competing while ineligible.

That’s probably not something you expect to work into a press release when you sign on to the NCAA’s communications office.

Louisville is also currently connected to the federal investigation into bribery and fraud in basketball recruiting; longtime head coach Rick Pitino and two Louisville assistants were fired last fall after that news broke. If it’s any consolation to Pitino now, he probably would have lost his job after this anyway.

We’ve come close to vacating a basketball championship before; Memphis was forced to vacate all of their wins from 2007-2008 due to issues with Derrick Rose’s eligibility; had they beaten Kansas in the memorable 2008 championship game, we’d have crossed this bridge already. There is precedent in football; USC was stripped of their 2004-2005 BCS national championship.

And if recent news of the widespread nature of the aforementioned federal investigation is true, we might see at least one more vacated championship in the near future.