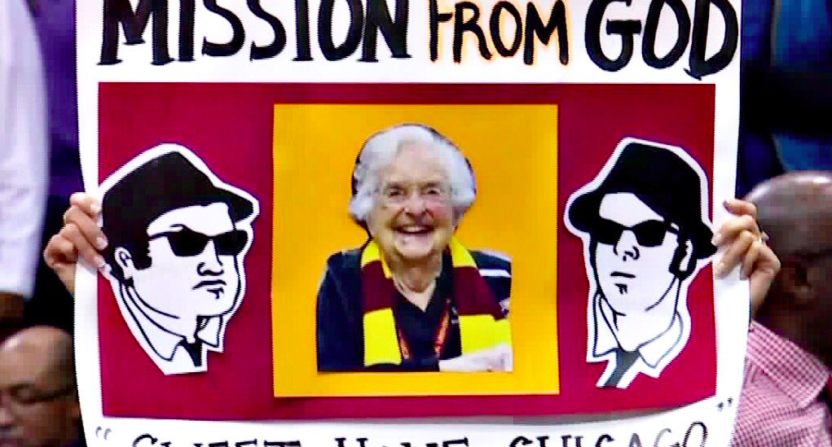 This weekend, an unassuming Catholic university from Chicago, Illinois will ascend to the highest mountain in all of college basketball, the Final Four. There, they will do battle with the likes of mighty Michigan for the chance at a biblical showdown, playing the role of David to a Goliath known as Villanova or Kansas.

If that’s all you knew, you’d probably assume that the school in question is DePaul. It fits all of those criteria, from the location to the religious affiliation to the unheralded nature of their rise to glory. Chances are, most people would have assumed it was the only school in Chicago that could have checked all of those boxes.

Now, however, everyone knows who the Loyola-Chicago Ramblers are. They, not DePaul, were the unassuming Catholic university who took the NCAA Tournament and college basketball by storm, shocking and awing their opponents en route to the school’s first Final Four appearance since 1963. The school, its players, and its sassy nun Sister Jean now find themselves in the national spotlight with plenty of people pulling for them to win it all, in Chicago and around the country.

The DePaul Blue Demons, meanwhile, have been watching all of this happen from their couches. Their 2017-18 campaign concluded with an 11-20 record, their 11th consecutive losing season. Not only that, the program hasn’t won more than 12 games in a season for that entire stretch. Losing has become so synonymous with DePaul’s men’s basketball program that sports websites dedicated ongoing features to it and news of an especially egregious DePaul loss can send College Basketball Twitter into a tizzy.

To really put things in perspective, Loyola-Chicago’s four wins in the 2018 NCAA Tournament so far quadruples the amount of tourney wins DePaul has since 1989 (one).

All of which is to say that you wouldn’t blame DePaul fans for closing their eyes, putting their fingers in their ears, and running away until Loyola’s run comes to an end. You might even assume they’d be openly rooting against the Ramblers, lest they remind the Blue Demon faithful just how bad it is that a major Big East program is getting outclassed in their own city by a team from the Missouri Valley Conference.

“It is really exciting, watching a city school that represents Chicago do that,” says Matt Martinez, DePaul ’12. “It’s amazing, the buzz around Chicago. The bars are packed. Today outside the Thompson Center, they were selling Loyola gear. It’s exciting to see Chicago excited about college basketball.”

Adeeba Mabruk, DePaul ’14, echoed that sentiment. “It feels great to see our neighboring school has made it this far in the NCAA Tournament. I could not be happier for Loyola-Chicago fans and the city of Chicago being represented this well.”

Instead of getting jealous, DePaul fans seem to be getting strategic. Loyola-Chicago’s Final Four run has officially become part of the internal roadmap to follow on their return to basketball success (or at the very least, the postseason).

“For the last couple months, there’s been a large, vocal part of the DePaul fanbase that’s been looking for change at the university because DePaul has been so bad for over a decade now,” said Martinez, referencing the #FireJLP movement, which seeks to oust AD Jean Lenti Ponsetto in favor of someone who can return the men’s basketball program to its glory days of the 1970s and 80s.

“DePaul fans are calling for accountability and want change. For Loyola to make the Final Four, it’s really held up a mirror to DePaul, who has rested on its laurels for many years. Loyola held up a mirror that said you’re not DePaul from the 80s anymore. You’re DePaul in 2018, so something’s gotta change. It’s been amazing how everything’s falling into place.”

In Loyola, Blue Demon fans like Martinez are seeing a blueprint they didn’t know existed. A roadmap that no one realized could be followed by Chicago’s major conference squad in much the same way its mid-major team is currently blazing it.

DePaul watching Loyola advance to the Final Four after spending $20 million on a new arena pic.twitter.com/rgxlssQ1Tv

The first lesson? Let go of your past.

There was a time when DePaul was a top-tier basketball program. Between 1976 and 1979, coach Ray Meyer led the Blue Demons to three Sweet Sixteens, two Elite Eights, and a Final Four appearance. In fact, between 1978 and 1992, DePaul never missed the postseason and missed out on the NCAA Tournament only twice. They might not advance very far, but they were a fixture all the same. Aside from a few brief respites, including NCAA Tournament appearances in 2000 and 2004, the Blue Demons faded back into mediocrity for much of the 1990s and 2000s. And once Jerry Wainwright took over in 2005, the bottom fell out on the program and they haven’t been able to recover since.

All of which is to say that a reliance on how good DePaul used to be hasn’t done them any good for over a decade and won’t do much for them moving forward.

The second lesson? Don’t pee on my leg and tell me it’s raining.

Chicago commuters who make a daily stop at the Fullerton CTA Station in the Lakeview neighborhood are treated to an onslaught of DePaul messaging. The school’s central campus is located directly below and around the station and many of the walls facing the platform are adorned with billboards and banners promoting the school’s basketball programs and student-athletes.

Those advertisements don’t promise championships. Heck, they don’t even promise victory in its most basic form. Instead, the messaging focuses on how their basketball players “do things the right way,” as it were. One banner reads “They All Major in Accountability” (which sounds like an NCAA violation). Another curious slogan, “Triple Doubles. Single-Focused” doesn’t even seem to make sense once you actually stop to think about it.

The subtext behind these ads is very clearly that DePaul understands it can’t offer you a good basketball product (at least on the men’s side; the women’s squad is doing just fine). So instead, they want to convince you that you should care because, hey, these kids are trying out here. And sure, there is nobility in the efforts of these student-athletes who deserve recognition, but nobody gets excited rooting for a team they know is probably going to lose. You’ll only pay to watch that happen so many times.

Still, that’s a campaign which DePaul could run up until now because let’s face it, nobody on Chicago’s North Side or down in The Loop was going to bother trekking it up to Rogers Park to see Loyola-Chicago play some school they’ve never heard of. DePaul could bank on that and try to appease to people’s common decency (and lack of options). That’s gone now. The Ramblers are officially the hottest college basketball ticket in town and will be so when the season starts up again in November.

CURRENTLY ON THE SHUTTLE AND THE BUS DRIVER IS MAKING US CHEER FOR LOYOLA AND HE HAS NO IDEA THAT CLAYTON CUSTER IS SITTING RIGHT THERE ??? this is too much pic.twitter.com/Y9REzhJoqI

The third lesson? Admit that you’re in an arms race and then start arming yourself.

If you’re trying to convince a highly touted Chicago recruit to stay at home, DePaul officially no longer has the best offer in town, and fans like Martinez recognize it.

“One thing that DePaul always had going for it, until Loyola made this run, is that we’re in the Big East, we have [a history of making] NBA players, and we have all this history. Loyola doesn’t have that history, but now they’ll be able to say we’re coming off a Final Four run, we have an on-campus arena, we have great academics. Would you rather go to DePaul and be a bottom-feeder in the Big East or would you rather be a winner in the MVC? Who’s not gonna want to be a part of that?”

Chances are, DePaul isn’t going to magically improve next season into a powerhouse. Meanwhile, there’s a decent chance Loyola will come back down to earth. So perhaps the best course of action for DePaul would be, as the idiom goes, if you can’t beat ’em, join ’em.

“If I’m [DePaul] Coach Leitao, I’m getting [Loyola-Chicago] Coach Moser on the phone and getting a game scheduled for next year,” said Martinez. “You gotta go head-to-head.”

Curiously, DePaul and Loyola-Chicago haven’t played one another since 2012 (a game won by Loyola, incidentally). The Blue Demons have scheduled UIC, Chicago State, Northwestern, and the University of Illinois in the years since, but the city’s two big Catholic universities have charted their own courses since then. Perhaps now is the perfect time for DePaul to admit that whatever Loyola is doing, they need to get up close and personal so they can copy and paste.

Loyala is what DePaul should be every single year

“If DePaul wants to ride the wave, they should schedule a game with them next year and they should look to see what Loyola has done as a kind of roadmap,” said Martinez. “Guys from Chicago. Winners from a winning culture. That’ll carry over.”

A rising tide lifts all boats, or so the aphorism goes. The Chicagoland basketball schools expected to garner all the attention and hoopla have failed in that mission. (Northwestern went to its first-ever NCAA Tournament last season but regressed back to a losing record this year.) Now that Loyola is doing what DePaul and Northwestern (and even Illinois) can’t seem to, it proves that, if you can make it happen, Chicago will support you. And if Chicago will support you, then you can build a winning basketball program. Loyola-Chicago did it without all the bells, whistles, and financial considerations available to DePaul. Just think of what the Blue Demons could accomplish if they ever got their act together?

“[Loyola’s success] shows kids, hey, if I do stay home and go to DePaul and get a winning team together, this is what it’d look like,” said Martinez. “It would be exciting. We would get the press coverage. People would care. I think that’s great. I think it’s all positive.”

“I am rooting for Loyola to win,” added Mabruk. “I think it will encourage DePaul and Northwestern to both up their game.”

So if you head out to a bar in Chicago this weekend to watch the Ramblers take on the Wolverines, don’t be too surprised to see someone wearing a DePaul hat sitting next to you, cheering them on as well. In Loyola-Chicago, DePaul sees its full potential come true. The more success they have, the more hope it gives the Blue Demons that something similar is possible.

Now all DePaul needs to do is change everything they’re doing and be more like the Ramblers. Easy enough.