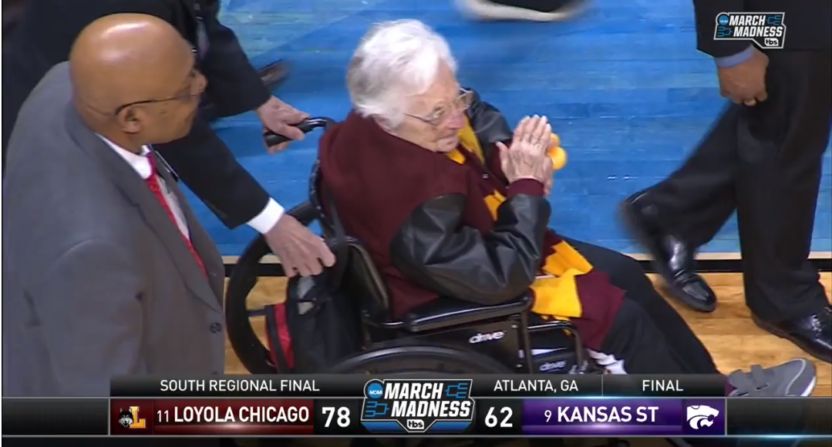 Sister Jean is going to the Final Four! The No. 11-seed Loyola Chicago Ramblers continued their stunning NCAA Tournament run with a 78-62 victory over No. 9-seed Kansas State in Elite Eight action on Saturday night in Atlanta.

Porter Moser’s squad needed a last-second three to upset Miami in the first round, made a late jumper to upset Tennessee by one point in the second round, and upset Nevada by one point in the Sweet 16 thriller. Loyola won those three games by a combined four points, but Saturday night’s Elite Eight win was total domination beginning five minutes into the game. Kansas State had a 5-4 lead early on, and Loyola responded with a 15-2 run to take a 19-7 lead. The game was essentially over there. Loyola took a 36-24 lead into halftime, and the lead got as high as 23 points in the second half. Kansas State never got the game within 10 points in the second half.

Loyola’s an incredibly unique team, as displayed perfectly by their players’ statistics this season. Clayton Custer is the team’s leading scorer on the season at 13.4 points per game, but five players average at least 10 points per game.

And on Saturday night, the leading scorer wasn’t any of those five players. It was senior Ben Richardson, who came into the game averaging 6.4 points. Richardson dropped a game-high 23 points on Kansas State, and did so with extremely efficient shooting: 7-of-10 on field goals, 6-of-7 on three-pointers, and 3-of-3 at the free throw line. And a few of Richardson’s three-pointers felt like game-changing plays.

In the final seconds of the first half, Richardson nailed this three to give Loyola a 12-point lead and all of the momentum going into half:

In the second half, Richardson nailed this three and was fouled. He turned it into a four-point play to give Loyola a 15-point lead:

And in the final minutes, K-State tried to make one last run, but Richardson hit this three for the dagger:

After not making the NCAA Tournament since 1985, the Ramblers — a Missouri Valley Conference representative — are off to the Final Four for the first time since 1963. Our John Cassillo had an excellent piece this morning on how special and rare this tournament run is from a true mid-major, and how it’s even more difficult these days with the power of the, well, power conferences.

Since television revenues became a larger part of college athletics, it’s been more difficult for mid-majors to compete. They don’t have the same access to resources or fan support or tradition. Their leagues don’t make anywhere near as much money as the power conferences. It’s hard to sustain success and those that do usually elevate themselves from mid-major status over time.

That said, the latter three were the established mid-major brand names. Even George Mason had become an annual CAA contender under now-Miami coach Jim Larranaga.

If they can fight through one last game in the South bracket, Loyola would be in that rare space which is really only currently occupied by GMU in the modern NCAA Tournament.

Well, Loyola’s indeed done that, and now they’re one win away from playing for the national championship. The Ramblers will need to get by the winner of the Michigan-Florida State game to play in the title game, and at this point, nobody should be too surprised if Loyola can win at least one more.

Here are some tweets about Loyola’s Final Four berth:

Loyola made sure Sister Jean got a piece of that net. pic.twitter.com/TLweK2bFab

Here's what Sister Jean looked like the last time Loyola-Chicago went to the Final Four: pic.twitter.com/74huzc2FEs

Absolute pandemonium. Loyola is going to the Final Four pic.twitter.com/tcCLYOI59x

The time has come to share my mom's Final Four. pic.twitter.com/LWywqW69Ah