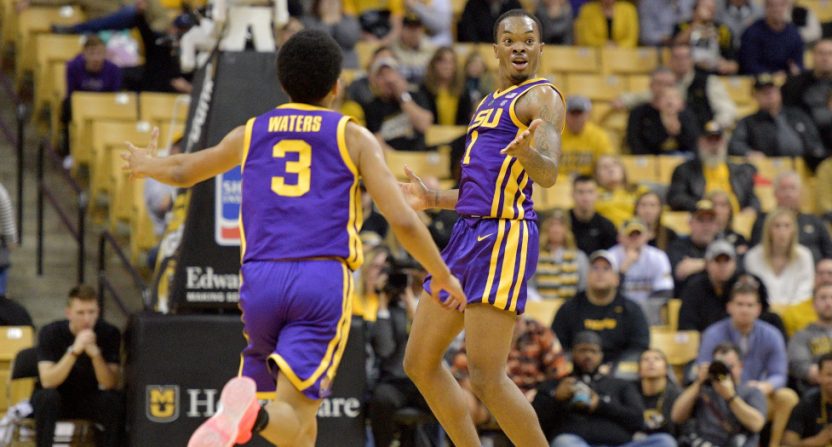 Saturday night saw a pretty crazy college basketball comeback, with the LSU Tigers (15-3 and 5-0 in SEC play heading in, plus ranked 25th in the latest AP poll) bouncing back from a 14-point deficit with just over two minutes to go and eventually winning in overtime. The road Missouri Tigers (10-7 and 1-4 heading in) fought hard throughout, keeping the game tied 33-33 at the half, and they started to pull away in the second half, taking a six-point lead with 13 minutes left and extending that to 68-54 with 3:20 left and 70-56 with just 2:14 left. But LSU bounced back to tie the game at 71 with seconds left in regulation, and then triumphed 86-80 in overtime, hurting some bettors who took Mizzou and the points along the way. But first, the game; as LSU magazine Tiger Rag assistant editor Tyler Nunez tweeted, that makes for a rather remarkable win probability graph:

The Win-Probability chart from the game. #LSU was all but out of it. pic.twitter.com/JQZ3TuH3TH

Mizzou didn’t score from the field in the final 3:20 thanks to some strong defense from LSU, and the home Tigers mounted a remarkable comeback in the final minutes. To start with, Skylar Mays recorded nine straight points after the 2:14 mark (a three-pointer, a layup and free throw, and another three-pointer), while Darius Days and Ja’vonte Smart collected key steals and rebounds (Smart had two of his four steals on the night inside the final two minutes and Days added another one there). Even with that, though, LSU still barely sent this to overtime; Tremont Waters (seen above with Smart) missed a layup in the final seconds, but Emmitt Williams grabbed the rebound, and the referees called a foul that many criticized, leading to Williams hitting one of two free throws to tie the game:

In overtime, Mizzou started off with a three-pointer from Javon Pickett and then picked up a 76-73 lead after two made free throws from Jeremiah Tilmon. But Mays responded with a dunk to pull LSU within one, and then Tilmon missed a layup. Smart got that rebound, took the ball down the court, and drilled a three to put LSU into the lead:

Mizzou tied it up again after that, but LSU took the lead for good with 1:58 left. After Smart missed a three-pointer, Williams grabbed an offensive rebound and fed it back to Smart, who nailed his second attempt. And LSU then outlasted Mizzou from there, eventually winning 86-80, a rather harsh blow for those who took the road team + 5.5 (especially considering that the final point came on a Waters free throw after Mizzou fouled him with just 0.9 seconds left):

Now that’s a painful way to lose a bet that looked like a sure thing in the final minutes of regulation.