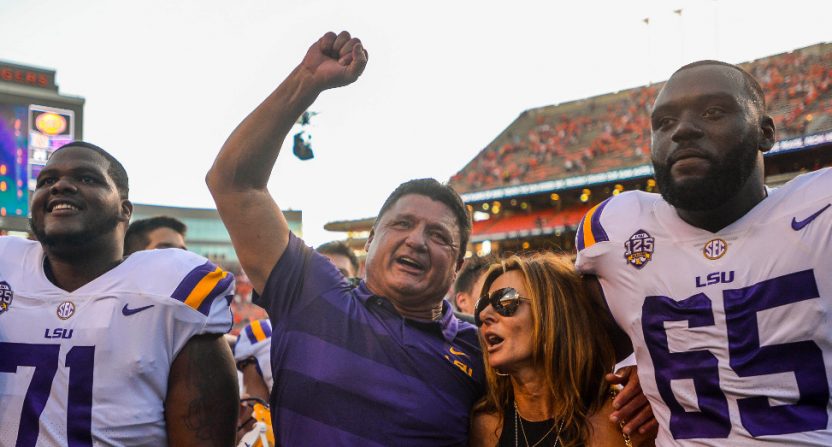 No. 12 LSU’s 22-21 road upset of No. 7 Auburn Saturday saw some zaniness erupting on the media side. First, during the game, there was the case of the Auburn fan getting kicked out of the game for yelling into a crowd mic, somehow coming back for more, and trying to invade the LSU radio booth after the game. LSU broadcasters Chris Blair and Patrick Wright told that story on Twitter afterwards:

Great to be back home in BR with an @LSUfootball victory. What a game and what a gutsy performance by the players, staff, and @Coach_EdOrgeron Also a very big “Thank You,” to @VoiceLadyTigers who was first to respond to angry Auburn fan who was trying to climb in our booth.💪

So after the game, he started yelling into the booth…something about "do y'all want to have me kicked out again?!?!". At that point, the details are hazy, but I am pretty sure I flexed my muscles and asked him "do you want 2 tickets to the gun show", and he left….

That’s fantastic. But it wasn’t the end of the stories after that game, not by a long shot. AL.com (the website associated with The Birmingham News and other Advance Publications papers throughout the state), started the next one, running a story about LSU coach Ed Orgeron and players shouting obscenities in the locker room after the game (really, we should all be shocked, shocked that there was cursing going on in a locker room after a win) and claiming that those were directed at Auburn. After massive social media backlash, including from former LSU player Jacob Hester (who was in that room), they deleted the initial tweet and added a correction to the story. The first tweet has been preserved in a manual retweet, though:

Why is this a story? Lmao RT @aldotcomSports: In a video that surfaced after the win, LSU players and Orgeron can be heard shouting obscenities about Auburn in the post-game celebration: https://t.co/mvYb0I6G7O https://t.co/RNiRitvSLk

And a similar one is still up (and heavily ratioed) on the @ALdotcomsports account:

Here are a few of the responses they got:

Yo, I was in that locker room and it had nothing to do with Auburn. Not one thing. That’s a far leap you took off of a 6 second video. Be better. https://t.co/WcstIekYEq

Garbage journalism. He wasn't cursing Auburn, they were cursing the "experts" that didn't give them a chance. Your retraction and apology will post when?

Meanwhile, the AL.com story now carries a “Update: This post was updated to reflect tweets, stating Ed Orgeron’s comments were not directed at Auburn.” note at the start. But it got a whole lot of attention before that, and unsurprisingly spread to other sites. It’s pretty amazing that one game managed to create two nutty media stories, though, from the Auburn fan’s run-in with the LSU radio booth to the reporting on Orgeron’s post-game comments. Perhaps in the SEC, it does, in fact, just mean more.