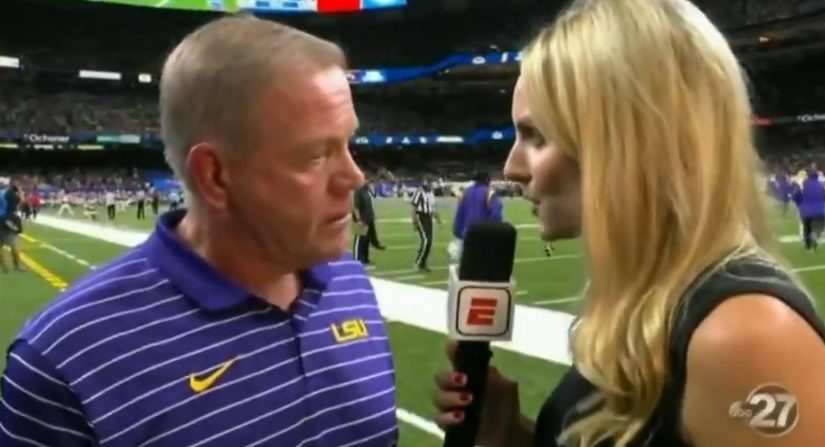 Something about season-opening games against Florida State brings out weird quotes from Brian Kelly.

When Notre Dame opened its 2021 season with a sloppy victory against Florida State, Kelly, then Notre Dame’s coach was interviewed by ESPN’s Katie George and joked that “maybe our entire team needs to be executed after tonight.” One year later, George interviewed Kelly, now coaching LSU. This time, it was during halftime of the Tigers game against Florida State. Kelly was not happy with LSU’s first-half performance and was sure to let everyone know.

The Tigers trailed 7-3 at halftime. During the second quarter, surrendered a touchdown on a flea-flicker, had a short field goal blocked and fumbled a punt. As the Tigers were taking the field for the second half, George asked Kelly, “what was your message?” He answered.

“We can’t play any worse than that, I don’t think. I mean it’s my first game, maybe we can. Just poor execution. We made our guys just understand that, you know, you can’t fumble the football on a punt like we did, although it was a good stop. We’ve had some miscues offensively where we’ve stalled drives. We couldn’t get off the field on third down. The guys just have got to be free and execute the way they’re playing. Now we’ve got to overcome a little adversity in the second half and grow as a football team.”

Brian Kelly is just feeling his feelings out there. #FSUvsLSU pic.twitter.com/6mRBchvJ2l

Kelly didn’t exactly get a lot of sympathy from college football fans.

Is there a coach worse at the halftime interview?! At least he didn’t threaten mass execution…yet. #briankelly #LSU https://t.co/Oq8hfne19B

What happened to his accent? 🤔 https://t.co/ut0EV8tbG3

Brian Kelly’s southern accent lasted longer than it took for him to throw his players under the bus #LSUvsFSU https://t.co/fZNryO51kx

He loves that word, "execute." https://t.co/NSYHeq7IF5

After receiving the second-half kickoff, the Seminoles went on a 68-yard drive that resulted in a field goal. After LSU went three-and-out, Florida State’s offense struck again when quarterback Jordan Travis and receiver Ontaria Wilson connected on their second touchdown pass of the game, this one from 27 yards. Tigers edge rusher Ali Gaye was also ejected on that play after a blatantargetingng foul.

The Tigers did respond with a touchdown drive of their own to trim the deficit but Florida State responded immediately with another touchdown to go up 24-10. So, we can’t imagine Kelly has liked the second half any more than the first.