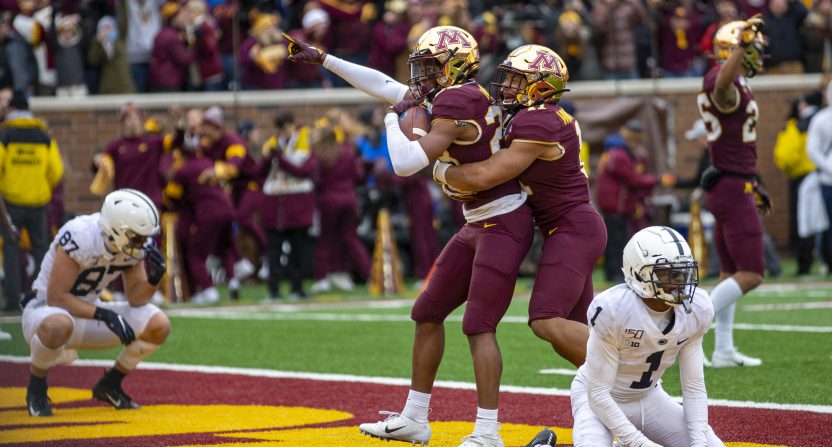 After a rather eventful day around the college football world, the big question is how did it all impact the College Football Playoff race. You would think that two of the top four teams falling on the first Saturday since the initial release of the College Football Playoff rankings would have a dramatic effect on the playoff race, but did it really?

Alabama and Penn State each suffered their first loss of the season, but neither team should drop off the playoff radar just yet. While Alabama’s chances of playing for a conference title are no longer under their control, they should take a small fall back in the rankings on Tuesday after a close loss to No. 2 LSU (who should have been No. 1  already and most certainly should be the top team in the rankings when they are updated). Penn State has a more difficult path to a conference title with a road game at Ohio State on the horizon, but the Nittany Lions still have a shot to sit in the driver’s seat for the Big Ten championship. In brief, either Alabama or Penn State is going to be out of the playoff mix in the next couple of weeks.

But does either control their own path to the College Football Playoff?

Before we get to the Crimson Tide and the Nittany Lions, let’s sift through the rubble of Week 11 to see which teams control their possible path to a spot in the four-team College Football Playoff. And why not start with the teams that have yet to lose a game?

The teams that REALLY control their path to the CFP

After the events of Week 11, we are left with five undefeated teams left standing in four power conferences; Clemson (ACC), Baylor (Big 12), Ohio State and Minnesota (Big Ten), and LSU (SEC). It would make life incredibly easy for the selection committee if all they have to do is sort the ranking for four undefeated power conference champions without having to worry about the one-loss teams hoping for some good news.

After getting to play the disrespect card after the defending champs were ranked fifth by the selection committee, Dabo Swinney had Clemson rolling early and often on Saturday night against NC State. They’ll absolutely be moving into the top four following that performance hours after Penn State lost on the road. Clemson was already in a good spot, because a 13-0 Clemson was very likely to move up at least one spot to get into the playoff. Now, they have what could be an inside track. As long as Clemson doesn’t lose a game, they will have nothing to worry about even if they don’t get to play a single top 25 team this season (another scenario that is potentially in play after Wake Forest lost on Saturday, so go ahead and count Wake Forest out from being a team that controls its path).

LSU already has the strongest on-the-field collection of wins this season and appears to be heading to the SEC Championship Game. Like Clemson, as long as LSU continues to win (including in Atlanta for the SEC title), they’ll be a lock. The only discussion will be whether or not they will be the top seed. LSU may also be in the best overall position now to suffer a loss and still have a decent chance to be included, but we’ll worry about that should that scenario present itself.

Baylor was ranked No. 12 by the selection committee, but there’s a pretty good probability that an undefeated Big 12 champion would be nearly impossible to pass up for a top four spot. Baylor’s biggest hurdle to running the table may be having to beat Oklahoma twice. Baylor hosts Oklahoma next week, but the Bears would probably need to beat Oklahoma a second time in the Big 12 Championship Game too. Baylor also has to play Texas, so the Bears have some work to do, but a 13-0 Baylor should be in the playoff if they can pull it off.

Which brings us to Ohio State and Minnesota. Simply put, if either team finishes the season without a loss, they’ll be in. The catch is only one can possibly end the regular season without a loss, because only one can win the Big Ten Championship Game, and it’s still possible both lose a game before then. Minnesota’s challenging November schedule started with a bang but must be followed up with division games at Iowa and home against Wisconsin. However, Minnesota only needs to win the Wisconsin game to get to the Big Ten Championship Game. Ohio State has a scrimmage against Rutgers next week before hosting Penn State and ending the regular season at Michigan. Ohio State looks like a monster right now and will be favored. Winning those games and then capping it with a win against a (top 10?) Minnesota or Wisconsin (again) would cement Ohio State in the playoff for sure. The Buckeyes could even manage to lose one of those games and still have a shot.

As is typically the case, win your games and you probably won’t have anything to worry about. So what about those teams that have already lost a game?

Of all of the one-loss teams in the pool right now, Georgia absolutely has the worst loss of the bunch. Georgia’s 20-17 home loss to South Carolina — who has fallen to 4-6 and may not be going to a bowl game after losing at home to Appalachian State on Saturday — continues to be a bad loss to have. The good news for Georgia is they also own wins against Notre Dame and Florida, a pair of two-loss teams that still carry some respectable rankings by the playoff committee. And considering Georgia was already sitting at No. 6, that figures to be a pretty decent spot to be sitting for the Bulldogs. Winning out, which would include a likely win against No. 1 LSU in the SEC Championship Game, would very likely put Georgia in the playoff. Leaving out a 12-1 SEC champion seems impossible to comprehend, so for that reason, Georgia should be included in the list of teams that control their playoff path.

It will be interesting to see where the committee places Penn State this week. A loss at Minnesota was a tough one to take, but considering where the Gophers are right now, this was far from a playoff-busting loss for the Nittany Lions. Regardless of where Penn State drops in the rankings, staying in the top 10 feels likely considering the Nittany Lions still have a win against Michigan and Iowa (although Iowa could fall out after losing to Wisconsin) to pad their profile. Penn State’s playoff hopes will hinge on doing what no team has seemed capable of doing, beating Ohio State. While it may not be likely, a win against the Buckeyes in Ohio Stadium would probably move Penn State back into playoff position, and a potential rematch with Minnesota could have a different result. Also, in that scenario, Penn State could then say they have defeated every team they have faced this season.

Might be in good shape, but won’t hesitate to ask for help

These two Pac-12 contenders should be lumped together because they face the same situation. Both have one loss away from home, and both could reach the Pac-12 championship game with a record of 11-1. A 12-1 Pac-12 champion would be worth discussing, but either one may need some help. Of the two, Oregon probably stands the best shot with a 12-1 record since their only loss was to Auburn in the season opener, and the Ducks controlled that game for roughly 58 minutes. Auburn could really help Oregon out next week by taking care of Georgia. And nobody in Eugene would be unhappy if Auburn could lend another helping hand by eliminating Alabama from the equation.

Alabama may have lost to LSU at home, but don’t count them out just yet. Remember that Alabama has reached the playoff once before without winning its division, and that could still remain a possibility this season. But Alabama has no control of their playoff hopes at this particular point in time. Not when LSU is in the pole position of the SEC West and a 12-1 Georgia possibility still exists (in which case Georgia and LSU would likely both be in the playoff before an 11-1 Alabama). And an 11-1 Alabama won’t stand much of a chance to pass an undefeated Clemson or an undefeated Ohio State. Even a 12-1 Oklahoma with the Big 12 title would stand a better chance (with Alabama transfer Jalen Hurts, no less).

Such is the dilemma for a team with no wins against a top 25 opponent the instant you take the first loss. Even if the loss is to a team as good as LSU, Alabama will lose ground on the competition for the lack of quality wins some other teams have to offer. Alabama may still end up in the playoff, because a lot can happen in the next few weeks, but they need some help if they’re to regain control of their path to the College Football Playoff this season.

OK, but go back to the Sooners for a minute…

After losing to Kansas State and then having a bye week, it seemed like everyone forgot about Oklahoma this week. That seemed odd for a team that is still the favorite to win the Big 12 with a quarterback putting up Heisman Trophy-caliber numbers (or at least worthy of a trip to New York to see Joe Burrow win the award). And after escaping an upset bid by Iowa State this weekend, the Sooners once again command your attention. They’re in the top 10 after all, so why would anyone forget about them?

Yes, Oklahoma has been in the College Football Playoff the last couple of seasons and could still manage to have a shot at 12-1 if they beat Baylor next week and (potentially) again in the Big 12 Championship Game. The question is, does simply running the table from here on out guarantee Oklahoma a spot? Right now, that is not appearing to be the case given the teams that are still ranked ahead of them without a loss, or even some with one loss. For example, if it comes down to one spot, would you go with 12-1 Oklahoma or 12-1 LSU? 12-1 Oklahoma or 12-1 Georga? 12-1 Oklahoma or 12-1 Penn State? Maybe it depends on how these teams all play to get to the 12-1 record they need to get there.

Oklahoma still has to make a case against the top one-loss teams, let alone the dwindling pack of undefeated teams still sitting out there. So no, Oklahoma does not control its path to the playoff.

But all of this could easily change one week from now. This is the beauty of this time of the year in college football. The race is on.