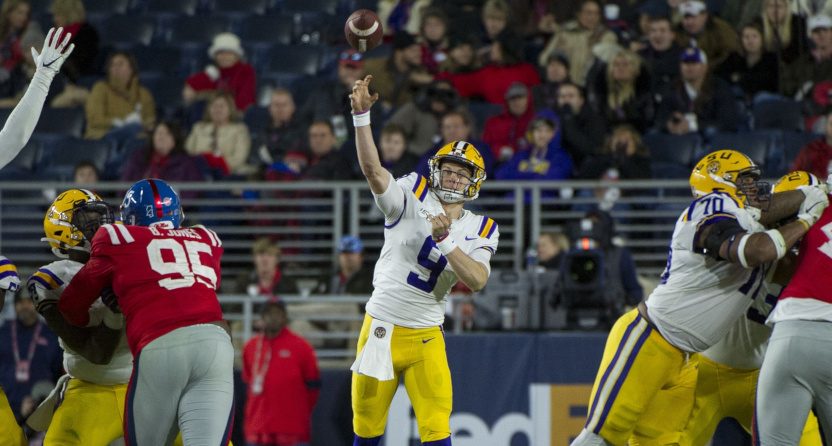 A week after LSU’s 46-41 win at Alabama, the now-No. 1 Tigers faced another road test against Ole Miss. And they managed to pull out a win in an even-higher scoring game, beating the Rebels 58-37.  There were some nervous moments for LSU in this one, especially with the defense not always looking all that solid, but quarterback Joe Burrow helped further bolster his Heisman Trophy campaign (where he’s currently a favorite by several accounts) by completing 32 of 42 passes (76.2 percent) for 489 yards (a career-high) and five touchdowns (albeit with two interceptions). Here are three of his best throws on the night, all of which went to receiver Ja’Marr Chase (who had eight catches for 227 yards and three touchdowns on the night):

Picking up right where they left off. pic.twitter.com/2RvpORvKxG

Burrow not only set a career-high in single-game passing yards, he also broke LSU’s record for passing yards in a season (previously, 3,347 by Rohan Davey in 13 games in 2001). He now has 3,687 passing yards in 10 games played. And there could be some further big numbers ahead, especially with LSU facing 2-8 Arkansas next week. Saturday’s season-ending injury to Alabama’s Tua Tagovailoa also removes one of the other Heisman contenders. There are still others out there, including Oklahoma’s Jalen Hurts (who threw for 297 yards and four touchdowns in the largest comeback in school history Saturday against Baylor), but Burrow’s looking to be in pretty good shape at the moment.

However, there are some questions about the LSU defense going forward. After giving up 41 points to Alabama and 37 to Ole Miss, this defense doesn’t look as formidable as it once did. And they had a real tough time containing Ole Miss quarterback John Rhys Plumlee, who only threw for 123 yards (with nine completions on 16 attempts) but ran 21 times for 212 yards and four touchdowns. That produced a remarkable stat:

So, the LSU defense at least has some work to do going forward. But the Tigers are 10-0, and they have the current Heisman favorite under center. That’s not a bad position to be in.