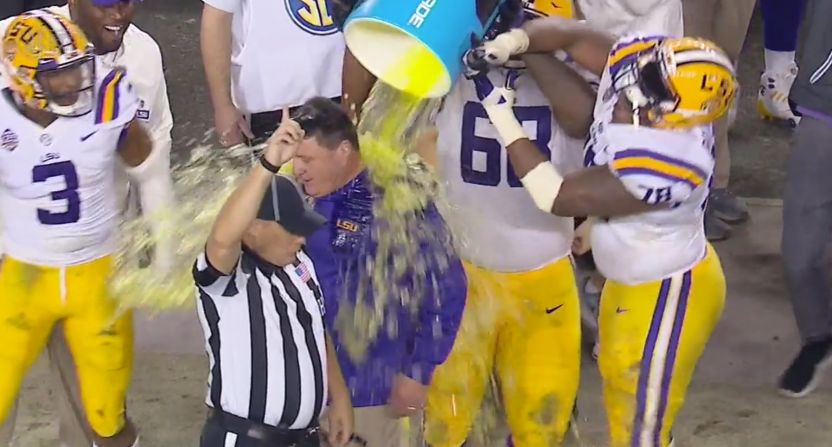 There’s a pretty simple rule when it comes to deciding to douse your head coach in a celebratory Gatorade bath- make sure your team is actually going to win the game.

A couple of LSU players jumped the gun on a Gatorade bath for LSU head coach Ed Orgeron on Saturday night in College Station. And over an hour later, the Tigers lost in seven overtimes in what turned out to be the highest-scoring game in FBS history.

The LSU interception was wiped out by a video replay review ruling Texas A&M quarterback Kellen Mond’s knee had hit the turf prior to the interception. As a result, Texas A&M kept the ball and Mond responded by throwing a game-tying touchdown pass to Quartney Davis on the final play of regulation.

To overtime we would go, with Orgeron still soaked in the sports drink liquidy goodness, and it would be quite some time before this one was decided for good.

After the teams exchanged field goals in the first overtime, the two teams then exchanged touchdowns in the second overtime. To a third overtime we would go, with LSU quickly scoring on a Joe Burrow touchdown pass to Dee Anderson on the first play from scrimmage. Not to be outdone, Mond didn’t waste much time of his own with a second down pass to Kendrick Rogers, who made a spectacular one-handed grab that defied nearly all forms of logic on this planet.

But we were just getting warmed up. This was close to ending in the fifth overtime, but Rogers came to the rescue once again with a game-tying touchdown that would send the game to a sixth overtime after a failed two-point conversion.

A seventh overtime would follow, because why not? Burrow opened the seventh overtime with an incomplete pass, but Texas A&M was flagged for pass interference, and one play later Burrow rumbled 10 yards for a score. But the two-point conversion attempt was tipped by the Aggies defense and came up shy of the end zone. So Texas A&M had another chance to close this one out. A pass from Mond to Davis on 3rd and 15 tied the game up once again, and then, at long last, the Aggies sent everybody home with a successful two-point conversion pass form Mond to Rogers.

The 146 combined points scored in the marathon game set a new record for the most combined points in an FBS game. The previous record was set by Western Michigan and Buffalo last season with 139 points scored in their own seven-overtime game. That game also tied for the most overtimes in a single game, as did the LSU-Texas A&M tilt. The record for most points in regulation of an FBS game still belongs to Pittsburgh and Syracuse from their 2016 game that saw 137 points scored. A 2008 Division II game between Abilene Christian and West Texas A&M still holds the NCAA record for the highest-scoring game with 161 points scored. We just needed another overtime or two in College Station to set that record on Saturday night.

The loss throws a slight curveball at LSU and their bowl outlook, potentially. Now with three losses, the selection committee’s rankings will be important to pay attention to as LSU hopes to not drop too far in the pecking order for a potential at-large bid to a New Year’s Six bowl game. Florida, who beat LSU earlier this season, will likely benefit the most from LSU’s loss as the Gators should move ahead of LSU in the rankings. Penn State might be a reach at No. 12 coming into the week. But losses by Michigan and Washington State could also provide a slight cushion for LSU as there will be shuffling of the top teams in the rankings.

Still, the next time Orgeron gets a Gatorade bath, let’s hope LSU players know for sure they will be winning the game.