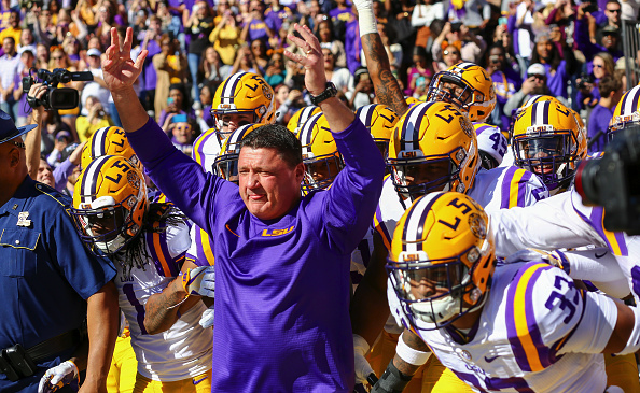 LSU has chosen its next head coach, which will either upset or thrill Tigers fans, depending on where they stand. Ahead of the school’s official announcement at 1 p.m. ET, multiple outlets reported that LSU has decided to give interim coach Ed Orgeron the permanent gig.

According to The Advocate‘s Ross Dellenger, LSU was making a hard run at Houston coach Tom Herman. On Thursday night during the Tigers’ game against Texas A&M, there were reports that the school had offered him the job, which athletic director Joe Alleva refused to comment on. Herman himself denied the rumors before Houston’s game versus Memphis on Friday. The situation was an embarrassing misstep that the school clearly wanted to push out of the news cycle as quickly as possible.

Via Dellenger’s report, LSU’s decision was essentially made for them when Herman called officials at 5 a.m. local time to inform them that he was leaning toward taking the Texas job and discussions with his agent ended. (The Longhorns’ head coaching gig is expected to open up on Saturday when the school announces that Charlie Strong has been fired.)

Orgeron was already popular with his players and fans, and had generated strong support to be named LSU’s permanent head coach. A native of Larose, Louisiana who played college ball at LSU and Northwestern State, the 55-year-old gets the culture in Baton Rouge and provided a familiar voice for supporters to rally behind. Opening up practices and pregame ceremonies to reporters and former players has also been well received. He’s been on the LSU staff since 2015, initially hired as defensive line coach.

During more than 32 years in coaching, Orgeron is perhaps best known for a seven-year stint as an assistant at USC, his head coaching tenure at Ole Miss (where he went 10-25) and a return to Southern Cal, where he was the interim head coach in 2013 (going 6-2) after Lane Kiffin was fired.

Interestingly, Kiffin and Orgeron could soon reunite. As part of his presentation on Friday which reportedly “blew away” LSU athletic officials, Orgeron detailed long-term plans that included hiring a proven offensive coordinator. Kiffin, now in charge of the offense at Alabama, is apparently at the top of his list. He was previously Orgeron’s boss as head coach at Tennessee and USC.

Orgeron is also expected to retain defensive coordinator Dave Aranda, whom Miles hired away from Wisconsin following last season. This season, LSU ranks 14th in the nation in total defense. According to Dellenger, the athletic department is set to promote Aranda (presumably to associate head coach) and give him a significant raise. (He already had a three-year deal.) Part of Orgeron’s new contract allots more money to pay his coordinators.

Since taking over as LSU coach following Les Miles’ firing, Orgeron has led the Tigers to a 5-2 record. His losses were to Alabama and Florida. Depending on the outcome of Auburn-Alabama, LSU could finish in a second-place tie in the SEC West. Several bowl projections have the Tigers set to play in the TaxSlayer Bowl on Dec. 31 against an ACC opponent, likely North Carolina or Virginia Tech.