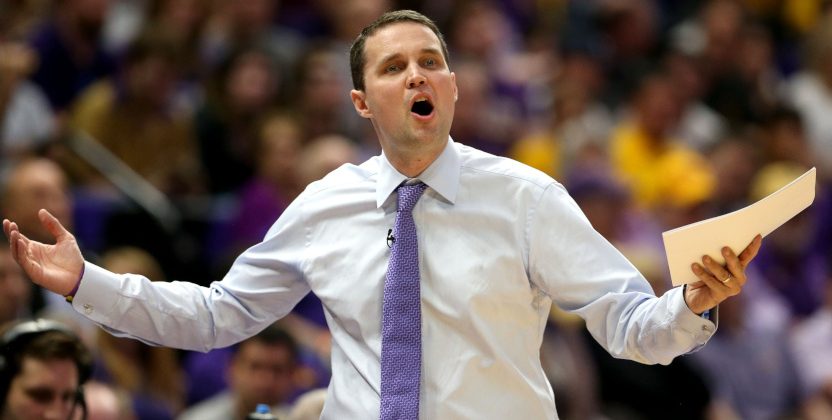 In the wake of Thursday’s Yahoo report of comments from LSU men’s basketball coach Will Wade caught on a FBI wiretap, the school appears to have decided to follow advice from media critics to immediately punish Wade and cooperate with the NCAA rather than historical precedent suggesting cooperation with the NCAA isn’t helpful. On Friday, LSU announced that they’ve indefinitely suspended Wade. Here’s their statement:

This decision has many LSU fans upset, especially considering that their team is having its best season in some time and that cooperation often hasn’t worked out well for other schools. The most recent example of that comes from the NCAA’s punishment for Missouri in January (where the Tigers received severe sanctions over academic misconduct by a tutor, despite their cooperation with the investigation and despite limited to no proof of the sports programs’ knowledge of what happened), and that decision alone led to a whole ton of pieces making strong cases that schools should not cooperate. But LSU has now decided to say they’re “closely coordinating with the NCAA” and that “they have our full cooperation.” And the timing here has raised some questions about if this is in response to the heat the school was taking from media critics, particularly USA Today columnist Dan Wolken. Here’s how Wolken tweeted his column out Thursday:

COLUMN: If LSU was going to the NIT, they'd ban themselves from the postseason and fire Will Wade after explosive Yahoo! report. But because they have a chance to make the Final Four, it'll be dirty business as usual. https://t.co/kJivc1TPK2 via @usatoday

Some highlights from that column:

After an explosive report Thursday by Yahoo! Sports, which obtained transcripts of a wiretapped phone conversation between coach Will Wade and black market deal-maker Christian Dawkins, LSU’s mere presence in the tournament is a mockery. It’s an embarrassment for the school, for the Southeastern Conference and for an NCAA justice system that is relying on the FBI to do its dirty work and still can’t take meaningful action in time to save the tournament from such obvious taint.

And if anyone at LSU or the SEC actually had the sense to acknowledge what was right in front of them, they wouldn’t allow it to happen.

If LSU was headed for the NIT rather than an SEC regular-season title with a win Saturday, there is little doubt the school would spend this afternoon in self-preservation mode, announcing a self-imposed postseason ban and a suspension for Wade, who has now been caught on a pair of phone calls with Dawkins alluding to transactions he would be willing to engage in that would likely violate NCAA rules.

Instead, they will almost certainly deflect and deny questions about anything but basketball, hoping to glide through the next few weeks knowing full well their program has likely lodged itself on a ticking time bomb of NCAA penalties.

Because Wade is a winning coach who made LSU relevant for the first time since John Brady’s Final Four run 2006, it will probably take two years for the school to actually fire him. It should take two hours.

Look, it’s certainly possible to argue that this wiretap is a big deal. Wade isn’t explicitly caught offering impermissible benefits, and it’s notable that this is a discussion with a deal-maker about an offer supposedly made to a prospect rather than an actual offer to a prospect (team officials have been known to exaggerate things to third parties), but this does look like one of the more direct links between a coach and an impermissible offer that’s shown up so far in this wide-ranging FBI investigation. And that explains why some of the rhetoric around Wade has been more heated than with the many, many other coaches and programs discussed in this investigation, and that also helps explain LSU’s eventual actions here. But going from there to “LSU should fire him in two hours and ban themselves from the NCAA tournament” is a heck of a leap, even if the school eventually did decide to follow some of Wolken’s advice.

Wolken’s argument seems to rest on two premises: LSU playing in the NCAA tournament presents an “obvious taint,” and the school would be better off to preemptively cooperate with the NCAA  by firing Wade. Both of those premises seem flawed. First, yes, you can argue that the evidence against Wade appears stronger than with the other schools and coaches linked to this FBI investigation so far, but it’s not that much stronger. And if the shadow of any impropriety presents a “taint” on the NCAA tournament, it’s going to feature a pretty small field.

And given how college sports actually work, it seems likely that even a lot of the schools not yet caught in this particular investigation are doing similar things. So an instaban of LSU doesn’t all of a sudden mean there’s an NCAA tournament free of impermissible benefits to players. (And really, considering all the other problems in sports, “actually rewarding college athletes for the revenue they generate” doesn’t seem to present much of a “taint.” It’s pretty nice that all the columnists who complain about money going to players are just fine with getting paid to cover NCAA sports.)

As to that second premise, as mentioned above, the last few years have shown there’s almost no incentive for schools to cooperate with the NCAA. In fact, Missouri’s aforementioned cooperation seems to have worked out much worse for the school than a deny, deny, deny approach did for UNC (in what looked like a much worse academic scandal, and one where the school stood by its ridiculous classes). Even the NCAA’s chief hearing officer here admitted that cooperation doesn’t lead to much leniency these days:

On a conference call, David Roberts, chief hearing officer for the panel and special adviser to the president of USC, was asked if schools are now being encouraged not to cooperate or tell the truth.

“You can certainly make that argument,” Roberts said.

So, yeah, telling a school to fire a coach and ban themselves from the NCAA tournament was a bold take from Wolken. And while LSU didn’t go quite that far, it’s still interesting to see them follow at least some of what looked like pretty outlandish advice at first. Especially from a guy known for Big Gulp Left.