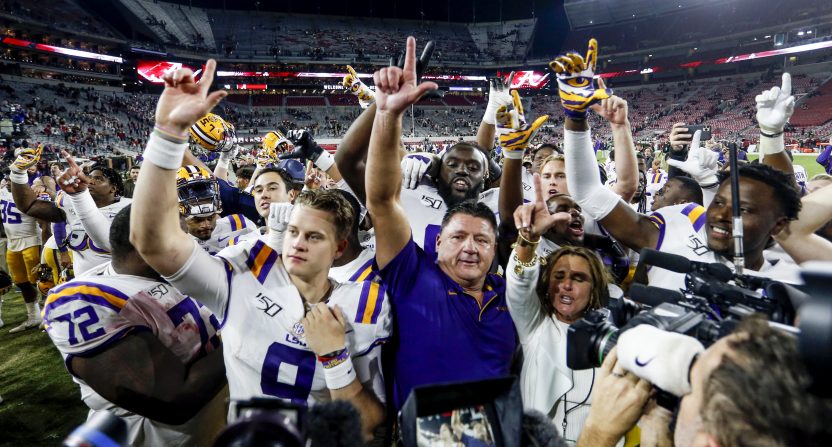 The Alabama-LSU game has been circled for months now by anyone with even a passive interest in college football. It certainly delivered today, too, with LSU going to Bryant-Denny Stadium and coming away with a 46-41 win.

LSU took a 33-13 lead into halftime, but Alabama climbed back into the game in the third quarter, with Najee Harris taking over for stretches.

Najee Harris can do it all for @AlabamaFTBL, TOUCHDOWN TIDE! pic.twitter.com/voUhq6WJQp

Alabama scored again at the start of the fourth quarter, appearing to set up either a shootout or even a trademark come-from-behind easy victory:

The Tide are rolling back in the second half. pic.twitter.com/CTXDLoYJki

Instead, LSU decided to open up the offense again, trusting Heisman frontrunner Joe Burrow to move the Tigers back down the field. Burrow delivered, too, finishing the night 31-39 for 393 yards, three touchdowns, and no interceptions. Some of those yards came on this drive, which put LSU back in front by two scores:

Absolutely INCREDIBLE effort by @LSUFootball to get this first down pic.twitter.com/2Mrsf5InZT

What an answer by @LSUFootball!

Edwards-Helaire hits the spin button and goes into the end zone untouched to silence the Alabama crowd. pic.twitter.com/OktMoeJhL3

After LSU failed to convert a two-point try, Alabama went back the other way, culminating in this clutch fourth down score to keep things close:

Tua throws a strike to Jerry Jeudy to pull the Tide within 5.

The task, then, seemed simple: if Alabama could stop LSU, or even hold them to just a field goal, they’d have a shot to win or force overtime. They couldn’t stop them.

What a drive.
What a statement.

LSU marches down the field to answer Alabama AGAIN. pic.twitter.com/RMui0wM9Ww

And so, up 46-34 with less than two minutes left, LSU cruised to an easy wait, no, what happened on Alabama’s drive?

With two timeouts left, a three-and-out would mean Alabama could get yet another chance to win the game. This is the kind of moment that a Nick Saban Alabama team lives for, and knowing the stakes, they were absolutely up to the challenge oh wait damn it LSU got a first down on their first play to seal the game.

LSU's first down to close the game perfectly sums this one up. Alabama couldn't stop the Tigers today. pic.twitter.com/pCthLl9SK7

And that’s how we got to 46-41. Those 46 points, by the way: the most ever given up by a Nick Saban Alabama team, and they were all well-earned (with the possible exception of that pylon cam play, but that’s a different story and they may have scored anyway.) LSU, meanwhile, is now fully in control of their College Football Playoff hopes; they’ll almost certainly be ranked #1 this week by that committee, and with Ole Miss, Arkansas, and a home game against Texas A&M remaining, they may as well book their flights for the SEC Championship game now.

Alabama, meanwhile, is facing a more uphill task. They still have a chance to make a statement against Auburn in the Iron Bowl, but other than that they wouldn’t have a win over a team currently ranked. They’re also, you know, really good; LSU had basically everything go their way today, seemed to dominate on just about every play, and still just won by five points.) Clearly a lot can happen, and one-loss Alabama still deserves a lot of consideration. (There’s also very much a non-zero chance that we end up seriously debating 12-1 Minnesota vs. 11-1 Alabama, and frankly I couldn’t be more excited about that possibility.)

But at this point, this season looks like the first real chance in a the playoff era that the Tide won’t be playing for a national title. Pity their Sugar Bowl opponent if they don’t make it.