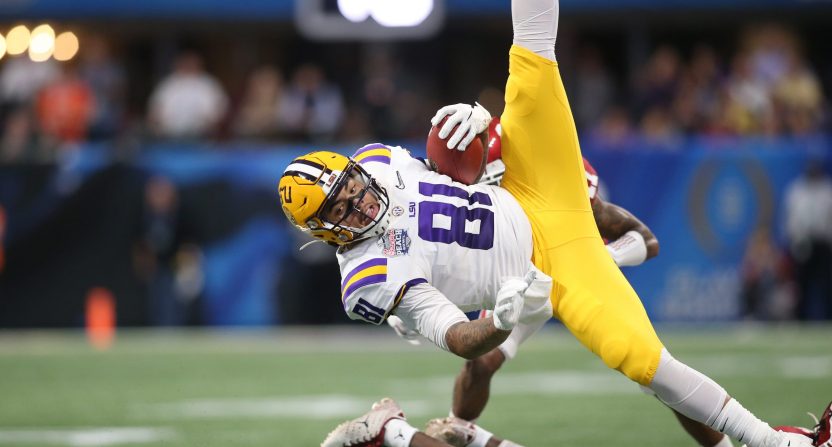 The LSU Tigers came into the 2019 College Football Playoff semifinals as a 13-point favorite over the Oklahoma Sooners. It didn’t take too long to understand why.

Oklahoma got the ball first but quickly went three-and-out thanks to a stout Tigers defense that started things off with a sack and shut the Sooners down on 3rd-and-17. Oklahoma muffed the punt, giving Heisman Trophy winner Joe Burrow a great field position. He and the Tigers took just three plays to score on a 19-yard touchdown pass to Justin Jefferson.

Justin Jefferson scores on a 19-yard TD and the Tigers go up 7-0. #CFBPlayoff pic.twitter.com/NHzrR3Mw0t

However, just when it looked like the Tigers might run away with one early, the Sooners turned things around and reminded everyone why they’re here. LSU lost All-American guard Damien Lewis, which seemed to signal a shift in momentum. Meanwhile, Jalen Hurts was able to break free on multiple occasions to move the Sooners down the field before launching a bomb to CeeDee Lamb for 51 yards.

CEEDEE LAMB WITH AN INCREDIBLE CATCH OF A FREAKING BOMB FROM HURTS TO PUT OKLAHOMA IN SCORING RANGE WOW pic.twitter.com/O5KjcZ1qGM

That set up an easy touchdown run by Kennedy Brooks to make it 7-7 with 7:34 to go in the first quarter.

Not to be deterred, Burrow and LSU got back on track, driving right down the field to set up a second touchdown. This one came courtesy of Terrence Marshall, who caught a pass in the endzone from a scrambling Burrow.

Oklahoma wasn’t able to match that score and LSU got the ball back (though not without some controversy over a non-call on what appeared to be clear pass interference).

This was not called pass interference #CFBPlayoff pic.twitter.com/giHfSgLT0n

Burrow continued to work his magic, specifically on a 3rd & 2 deep in LSU territory where he scrambled to the sidelines and somehow found Terrace Marshall for a back-breaking first down that kept the drive alive.

A few plays later, Burrow got all the time in the world and lofted a beautiful pass 35 yards down the field to a waiting Justin Jefferson who eased into the endzone. The kick made it 21-7 Tigers.

Oklahoma is far from out of this one but they’re going to have to figure out how to either keep pace with a red-hot Joe Burrow or find a way to shut him down. Neither sounds too promising.