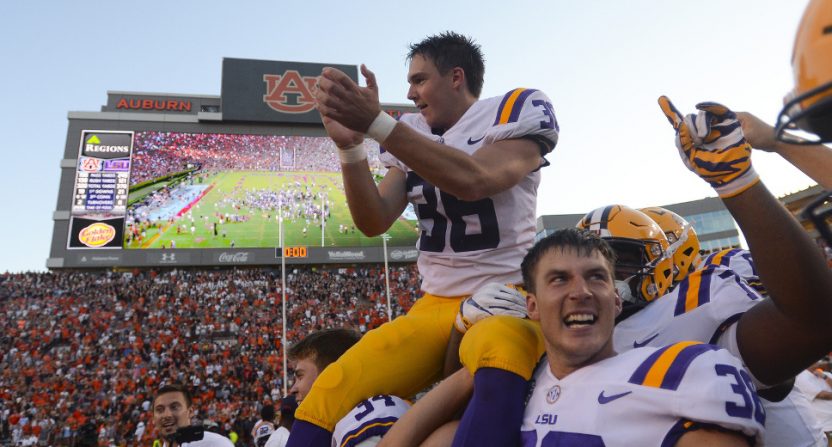 For much of Saturday’s game, it looked like the No. 12 LSU Tigers were going to come out with a road loss against the No. 7 Auburn Tigers. LSU struggled with penalties and poor offensive play throughout, and it looked like they might throw away the 7-0 lead they held after the first quarter; they trailed 14-10 at halftime and 21-13 after three quarters. But LSU managed to set up graduate transfer kicker Cole Tracy for a game-winning 42-yard field goal attempt as time expired, and Tracy nailed that, giving LSU their second consecutive win over Auburn and a road win to boot. Here’s that final play:

Both teams had plenty of reason to complain about the officials in this one, with LSU objecting to several early calls and Auburn complaining about some late ones (including pass interference calls that helped LSU get into field goal range). And this was far from a perfect performance for LSU; their defense fell down at several points, and their offense was often inconsistent at best. But a road win over the No. 7 team nationally is impressive regardless, and it suggests that these Tigers are going to be a significant part of the national conversation this year.

There’s still a lot of room for improvement for LSU, especially on offense. Quarterback Joe Burrow only completed 15 of 34 passes for 249 yards and a touchdown, and featured running back Nick Brossette was held to 69 yards on 19 carries (3.6 yards per carry). But the Tigers certainly made things happen Saturday. And they picked up their second-straight win over Auburn in the process.