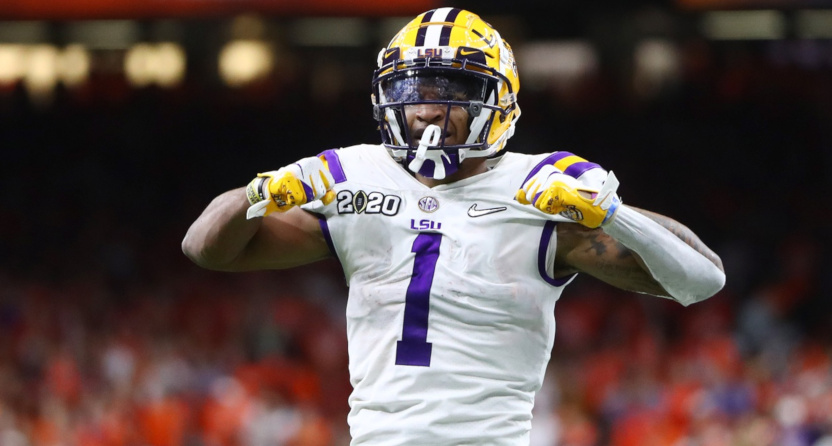 The SEC is currently still planning to play a 10-game conference-only schedule this fall, beginning on September 26, but it now looks like one of the conference’s top players from last season won’t be coming back. LSU receiver Ja’Marr Chase, who posted 84 receptions for 1,780 yards and 20 touchdowns as a sophomore last year during the Tigers’ 15-0 run to a national title and won the Biletnikoff Award as the country’s top FBS receiver, will be opting out of this season, as per Dennis Dodd of CBS Sports.

Sports Illustrated‘s Ross Dellenger and ESPN’s Alex Scarborough later confirmed the news that Chase is opting out, and an official announcement is expected Monday. Here’s more on Chase’s decision from Dodd’s piece.

LSU star wide receiver Ja’Marr Chase has informed the team that he is choosing to opt out of the 2020 college football season to concentrate on his professional career, sources close to the situation told CBS Sports.

A formal announcement is expected Monday with Chase, the nation’s top returning wideout, declaring for the 2021 NFL Draft.

Sources said Chase’s decision is not specifically related to the COVID-19 pandemic. Rather, it is believed agents may have simply convinced Chase to leave before his third collegiate season. NFL rules state a player cannot be drafted until three years after his high school graduation.

Chase was one of the most impressive weapons for 2020 first-overall NFL pick Joe Burrow and the Tigers last season, and there were several games where he completely went off, including September 21 against Vanderbilt (10 catches for 229 yards and four touchdowns), November 16 against Ole Miss (eight catches for 227 yards and three touchdowns), and the January 13 championship game against Clemson (nine catches for 221 yards and two touchdowns; he’s seen above during that game). Here are some of his season-long highlights:

Considering that Chase is already being projected as a first-round pick and quite possibly a top-10 or even top-five pick, opting out seems to make some sense for him. The 2020 SEC season, if it happens as planned, is going to come with a lot of uncertainty about COVID-19 and about scheduling. And that’s before you get to the team-specific concerns, with LSU losing a lot of talent to the NFL, including Burrow and passing game coordinator Joe Brady. It’s possible that the Tigers’ aerial attack will still be great with Myles Brennan stepping in at quarterback and with Steve Ensminger returning as offensive coordinator, but it’s far from a sure thing, and with Chase already being projected so high, there isn’t a lot of room for him to move up in evaluators’ estimations, but there is a lot of room for him to move down.

Chase’s departure is definitely a big loss for the Tigers, though. He was their top receiver last year with those aforementioned 1,780 yards, and the second, fourth, and fifth guys on that list are all headed to the NFL already (receiver Justin Jefferson and running back Clyde Edwards-Helaire were both first-round picks in 2020, while tight end Thaddeus Moss was signed as an undrafted free agent). Terrace Marshall (third with 46 catches for 671 yards) is back, and is projected by many to have a breakout year (and be a sought-after NFL prospect himself), and LSU does also have senior Racey McMath (sixth with 17 catches for 285 yards last year) and some well-regarded recruits who could step up, so the Tigers may wind up being fine. But Chase was probably their biggest returning star, and now he’s headed off to the NFL.