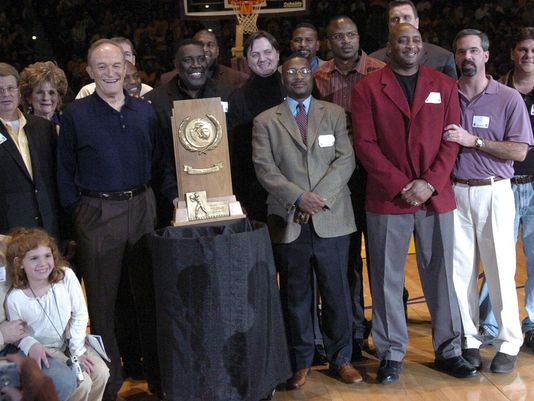 Is the Syracuse Orange’s run to the Final Four unprecedented? The 1986 LSU Tigers can assure you it’s not.

Syracuse has become the first No. 10 seed to ever reach the Final Four, but don’t allow that one detail to convince you that the Orange’s mad dash to Saturday’s national semifinals is a new thing in the history of college basketball.

Thirty years ago, LSU set an example Syracuse was able to follow during the past two weeks.

The paths carved out by the Tigers and the Orange aren’t exactly the same, but the similarities stand out far more than the differences. Moreover, some of the unique elements of each team’s magic carpet ride to the Final Four only draw these teams closer together in the larger theater of college hoops history.

A Power 5 conference team as a double-digit seed.

A team using a short rotation, going up against superior size.

A team facing a veteran ACC opponent at some point along the way.

A team with a coach who did better in March when nothing was expected of him.

A team which knocked off a No. 1 seed to fulfill its impossible dream.

These are the five fundamental unifying characteristics of the 1986 LSU run and the 2016 Syracuse run. Differences emerge in the various details, but the larger core realities are strikingly similar.

These weren’t a George Mason or a VCU run as a double-digit seed. These were power conference teams which finished 9-9 in their conferences during the regular season and failed to make the final of their conference tournaments. LSU and Syracuse are both examples of the kind of team many people don’t like to see in the NCAA Tournament: the middling high-major school which does just enough to get in, but hardly excelled during the four months preceding Selection Sunday.

Neither team was supposed to do anything in March, but then improbable things started happening… and didn’t stop on The Road To The Final Four.

You’ve read a lot about the journey of the 2016 Syracuse team. Here’s what you need to realize about the 1986 LSU squad, captured in this story by Glenn Gullibeau in the (Monroe, Louisiana) News Star.

The parallel begins with off-court issues. Syracuse had to deal with Jim Boeheim’s suspension and the fallout from the school’s run-ins with the NCAA. LSU didn’t face that particular obstacle, but coach Dale Brown kicked Tito Horford (yes, Al Horford’s dad) off the team. Nikita Wilson, an important player on the team, was ruled academically ineligible. In Syracuse’s case, the coach wasn’t always available; in LSU’s case, the roster wasn’t what the coach hoped it would be. Just the same, it was a struggle for coach and roster to work fluidly together. The season was one long figuring-out process.

LSU, like Syracuse, was given a chance to continue figuring things out in the NCAA Tournament. It made full use of the opportunity.

The LSU run differs from Syracuse’s 2016 journey in a few profound ways. One particularly prominent example is that whereas Syracuse beat a 7 seed, a 15, and an 11 before taking down a No. 1 seed in the Elite Eight, LSU faced a tougher seed path: 6, 3 and 2. The Tigers remain, to this day, the only team to make the Final Four by beating the top three seeds in their region since the field expanded to 64 in 1985.

However, while LSU did face tougher seeds, the Tigers did get a break akin to Syracuse not having to face Michigan State in the round of 32. LSU’s stroke of luck was the ability to play its first two tournament games at home in Baton Rouge. The Bayou Bengals beat Purdue in double overtime in the first round. They then beat Memphis State — a Final Four team the previous season — on a buzzer-beater in the second round. Syracuse perfected the art of the comeback in its 2016 run. LSU came from 12 points down to catch and then pass Memphis State. A YouTube video of that game appears above.

LSU’s run to the Final Four is precisely what helped lead the NCAA to prohibit home-court March Madness games in 1988. However, while the practice was still allowed, the Tigers used it to reach the Sweet 16.

That’s when the links between these teams become more readily apparent.

Syracuse defeated a veteran Virginia team loaded with upperclassmen and familiar with the NCAA Tournament, having been a top-two seed in 2014 and 2015. LSU defeated a similarly experienced ACC team, Georgia Tech, in the Sweet 16. The Yellow Jackets had reached the 1985 Elite Eight and given Georgetown — the colossus of college basketball at the time — a very vigorous challenge before losing by only six points. The 1986 Big Dance was supposed to be Georgia Tech’s coming-out party, especially since the Southeast Regionals were in the Yellow Jackets’ home city, Atlanta.

Yet, much as Syracuse improbably ended Virginia’s season, LSU was able to stop Georgia Tech in its tracks. Both teams shot well, but LSU forced more than 15 Georgia Tech turnovers while committing only four of its own. The 11-over-2 seed result was striking, but LSU’s ability to win in Georgia Tech’s backyard represented the most jarring aspect of that outcome:

Then came the regional final against top-seeded Kentucky. The Wildcats had won three times against the Tigers during the regular season and in the SEC Tournament. Yes, two of those games were very close, and LSU played those games while experiencing considerable roster churn and attrition. However, Kentucky still finished 17-1 in the SEC (20-1 including its SEC Tournament championship), eight games ahead of LSU. Even though the Tigers had come close to beating the Wildcats, it was hard to imagine the 11 seed finding a way to beat the top seed with everything on the line.

Against both Georgia Tech and Kentucky, LSU faced teams with greater size and length. LSU’s roster limitations meant the Tigers had to find a way to keep their main players on the court for 40 minutes while also limiting opponents such as John Salley (Georgia Tech) and Kenny Walker (Kentucky). Accordingly, Dale Brown used a 2-3 zone — hello, Jim Boeheim! — for extended periods of those games to save his team’s legs. Brown, though, went a step beyond Boeheim’s 2-3; against Kentucky, he used a box-and-one defense in the second half (Brown called it his “freak defense”) to contain Walker, who scored 16 in the first half but only two after halftime.

Late in the Kentucky game, another parallel emerged between 1986 LSU and 2016 Syracuse: Rebounding became a strength, not a weakness.

It’s generally hard for teams to rebound out of a zone defense, but it’s even more difficult to rebound without size. LSU had Ricky Blanton — at 6-6 — playing center. He was not the best jumper, nor did he have the most height, size or power. He just found ways to get to the ball, having a nose for when and where to anticipate a specific rebounding angle.

Late in Syracuse’s win over top-seeded Virginia in the Elite Eight, the Orange were able to deny Virginia’s bigs the ability to crash and feast on the glass:

If you watch the LSU-Kentucky game below, you’ll see that when LSU fell behind by four points (51-47) within the final six minutes, Blanton got a huge offensive rebound and continued to find gaps in Kentucky’s paint defense. This led to a 51-all tie and reset the contest, such that LSU was able to regroup and once again apply game pressure to a No. 1 seed which was feeling very nervous.

1) Syracuse’s Malachi Richardson became the hot hand for the Orange against the Cavaliers. LSU’s Anthony Wilson caught fire as a mid-range jump shooter down the stretch for the Tigers against Big Blue.

2) Virginia coach Tony Bennett, regarded as one of the best at his craft, didn’t foul Syracuse inside the final 90 seconds to extend the game. Kentucky coach Eddie Sutton — one of the legends of college basketball coaching — didn’t foul immediately after the Wildcats committed their sixth foul with 44 seconds left in regulation. The mistakes by two highly-acclaimed coaches cost their teams a chance at a comeback.

The 30-year gap between these stories simply doesn’t erode or detract from their similarities. Consider some bigger-picture connections between these two runs.

For one thing, Dale Brown is a poor man’s Jim Boeheim. LSU’s coach in 1986 was better at guiding an underdog team in March than a heavyweight. Yes, Brown did make the Final Four at LSU as a top seed in 1981, but he lost the year before as a top seed and didn’t find the ability to get LSU a high-end seed in most of the school’s NCAA Tournament appearances under his watch.

Brown was at his best when LSU was the underdog. If anyone wasn’t convinced after 1986 that Brown could work wonders with incomplete teams, he guided LSU — as a 10 seed — within one basket of the Final Four in 1987. LSU fell by one point to top-seeded Indiana in the Elite Eight.

The 1987 LSU squad could have been the first 10 seed to make the Final Four… but by coming one basket short, the Tigers ceded the stage to Syracuse these many years later.

Jim Boeheim, like Brown, hasn’t done well at winning as a high seed in March. He was the first victim of the 2-15 upset in 1991 (against Richmond), and he’s never made the Final Four as a No. 1 seed. However, three of Boeheim’s five Final Fours (Brown reached only two) have come as a 4 seed or lower. Like his 1996 and 2013 teams, only to a greater extent, Boeheim’s 2016 team has coalesced at exactly the right time. Dale Brown would recognize that particular coaching skill a mile away.

A final historical parallel between 1986 LSU and 2016 Syracuse is this: Both NCAA tournament runs were achieved against the backdrop of brand-new shot clock rules.

In 1986, college basketball debuted the shot clock. The 1985 season was the end of the pre-shot clock era. The 1986 campaign involved a 45-second shot clock.

When Villanova, one year before LSU’s magic March, claimed its improbable national title by beating Georgetown in Rupp Arena, there was no shot clock at all. The introduction of a shot clock was supposed to make life easier for the favored team, but LSU won in spite of that regulatory move.

On a similar level, this college basketball season was the first with a 30-second shot clock. The reduction of the shot clock’s length from 35 seconds to 30 was suppposed to tilt the playing field even more in favor of the better teams. Syracuse won in spite of that change in the sport.

The 2016 Syracuse story was, is, and always will be amazing. Yet, the more you study college basketball history, it becomes clear that the 1986 LSU run to the Final Four (also in a Texas city — Dallas) was the first of its kind.

Jim Boeheim didn’t create a new blueprint so much as he borrowed from Dale Brown, 30 years ago in another memorably mad March.