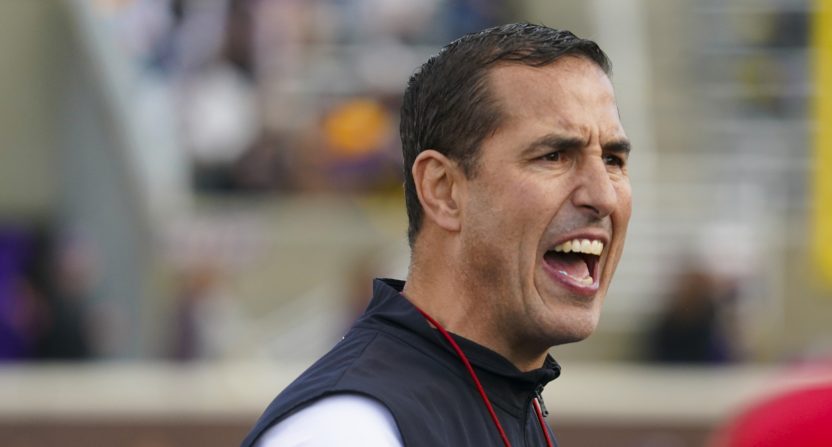 Among the many candidates out there for the high-profile college football coaching jobs that have become available (and may still continue to become available), Cincinnati Bearcats coach Luke Fickell is near the top of everyone’s list.

Fickell has turned Cincinnati into a perennial power during his five-year stint as head coach. He also just got the Bearcats into the College Football Playoff, the first time a Group of Five school has ever done so. Had he truly wanted the Notre Dame or Oklahoma jobs, he might have been at the front of the line to have gotten them.

However, Fickell has denied interest in those positions and seems intent on leading the Bearcats into the CFP. As for whether or not he’ll stay after that remains to be seen.

One interesting wrinkle introduced into the mix on Sunday is news that, according to NFL Network reporter Tom Pellisero, the Detroit Lions “quietly spoke with Fickell about their head coaching vacancy last year before they hired Dan Campbell.” He also added that it’s expected that he will be a candidate for NFL jobs in the upcoming hiring cycle there, which lines up a lot cleaner with the timeline of the College Football Playoff.

There are a lot of factors at play and we don’t know what kind of career motivations Fickell might have, but it sure seems like he’ll be on a lot of candidate lists if he’s interested. In the meantime, football fans certainly had their opinions on the report, including whether or not the Lions should have pursued Fickell further rather than hiring Campbell, who has the Lions mired in a winless season.

Don’t even worry about this stuff.

Our coach is a badass.

If you’re not calling him and at least inquiring you’re doing a bad job. https://t.co/3BcRPYfcY0

Fickell has a lot to focus on right now with as the Bearcats take on the Alabama Crimson Tide in the CFP semifinals. If they can somehow win that game it’ll be a huge upset that puts Cincinnati in the National Championship Game. At that point, Fickell could probably just call his own shot for what he wants to do next.