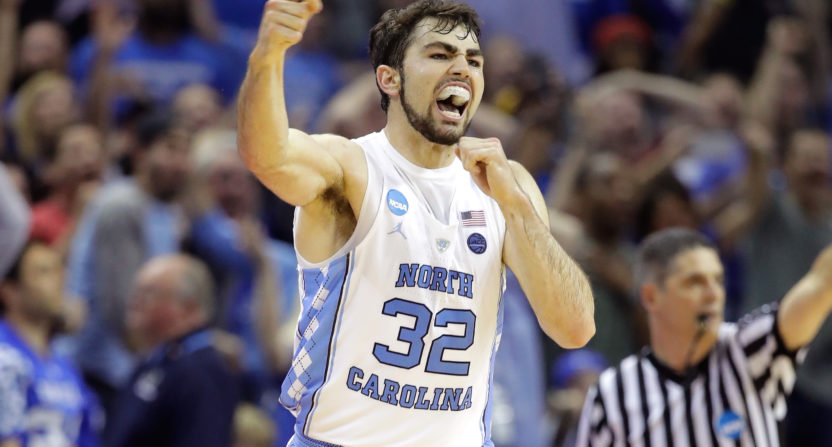 Part of the thrill of North Carolina forward Luke Maye’s game-winning jumper in last year’s Elite Eight was the idea that we had never heard from him before and might never hear from him again. It was a classic March Madness story: under-recruited bench-warmer who looks like a team manager steps up to play hero at the perfect time.

But eight months later, it seems as if the 17 points Maye dropped on Kentucky last March were not entirely a fluke, after all. On Friday, the junior racked up 28 points and 16 rebounds in an 87-68 Tar Heels win over Arkansas at the PK80 invitational tournament. Maye converted 11 of his 16 shots, including four of five from long range and added five assists for good measure. Maye has now scored 20 points in four of North Carolina’s first five games and has pulled down at last nine rebounds in all five.

The last Tar Heels player with 100 points and 50 rebounds through the season’s first five games? Antawn Jamison more than 20 years ago.

Luke Maye is the first UNC player with 100 points & 50 rebounds through the team's first 5 games since Antawn Jamison in 1996-97. pic.twitter.com/wTyCTPXIKb

In fact, even if you forget Maye’s rebounding prowess, he’s off to one of the most impressive starts in recent UNC history.

Just two years ago, it would have seemed absolutely inconceivable that Maye could wind up the best player on a North Carolina team ranked in the top 10. He arrived in Chapel Hill as a 3-star prospect and an afterthought even in a middling Tar Heels recruiting class. As a freshman, he did nothing to raise expectations, playing 5.6 minutes per game and scoring 1.2 points. Last year, he improved to 14.2 minutes and 5.5 points. Even after his NCAA Tournament heroics, which helped North Carolina to a national championship, he didn’t look like any sort of superstar.