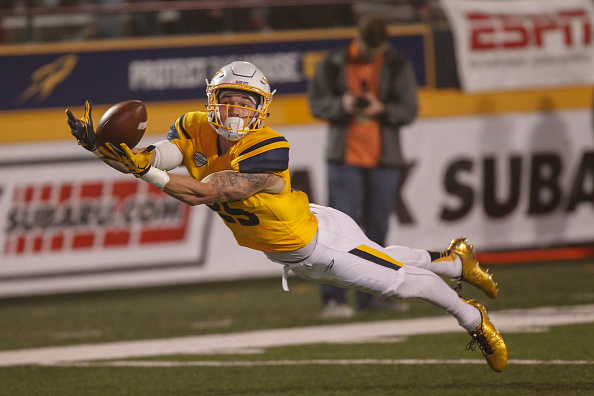 Continuing our MAC position previews here at The Comeback this week, I break down the conference’s tight ends and wide receivers. Even though All-Americans Corey Davis and Michael Roberts have moved on to the next level, the league still has plenty of outstanding pass catchers.

Q. Who are the top returning receivers in the MAC?

4. James Gardner, WR, Miami – Top receivers take their play to another level against tougher competition. Gardner certainly fits that category. In two games against Power 5 opponents last year (Iowa and Mississippi State), he caught 11 passes for 187 yards (17. 3 ypc) and three touchdowns. In addition, he was one of the more explosive players in the league, ranking fourth in yards per catch (16.67) and third in receptions longer than 20 yards (17). He’ll team up with Jared Murphy and tight end Ryan Smith to form one of the better trios in the conference.

3. Scott Miller, WR, Bowling Green – A dependable target, Miller earned first-team All-MAC honors last season. He caught 74 passes in 2016, which is tops among this year’s returnees. Additionally, he had some huge games for the Falcons last season, eclipsing the 140-yard barrier four times, including a 149-yard effort against archrival Toledo. Expect him to put up even bigger numbers in Year 2 of Mike Jinks’ system.

2. Corey Willis, WR, Central Michigan – One of the top playmakers in the league last season, Willis caught 71 passes for 1,087 yards and nine touchdowns. He was also one of the top deep threats in the MAC, as 17 of his receptions netted 20 yards or more. Of course, he’s best known for scoring one of the most talked about touchdowns in college football history, as he grabbed a lateral from Jesse Kroll and raced into the end zone to give the Chippewas an upset victory over Oklahoma State. His presence in the lineup will make it easier for CMU to break in a new signal-caller this fall.

1. Cody Thompson, WR, Toledo – Without question, Thompson is the most dangerous receiver in the league this year. He finished second in the MAC in receptions last season and led the conference in both yards per catch (19.83) and receptions longer than 30 yards. He went over the century mark six times last season, highlighted by a 161-yard effort on the road against BYU. With Logan Woodside returning as the Rockets’ QB this fall, look for Thompson to have another huge year.

Q. Which receiver is due for a breakout season in 2017?

I’ll go with Toledo’s Jon’Vea Johnson. Don’t get me wrong: he had a great year in 2016, earning second-team All-MAC honors, while catching 40 passes for 773 yards and 10 TDs. However, the Rockets lose tight end Michael Roberts and top possession receiver Corey Jones this fall. Their departures mean that Johnson should have an even bigger role in the offense.

Considering that he had some huge games – including a nine-catch, 182-yard showing against BYU – with those guys in the lineup, there’s no reason to think that he won’t continue to put up great numbers without them. Don’t be surprised if he goes over the 1,000-yard mark in 2017.

Q. Who is a newcomer to keep an eye on this fall?

The player I’m keeping an eye on is Northern Illinois receiver Jauan Wesley. He started nine games for Iowa State in 2015, catching 30 passes for 301 yards. His best game that year came against Rose Bowl-bound Iowa, where he caught four balls for 76 yards and a touchdown. Considering that he faced five ranked opponents during his time in Ames, he’s no stranger to playing against top competition. That experience is something that Northern Illinois could use this season now that Kenny Golladay is a member of the Detroit Lions.

It’s definitely Western Michigan. The Broncos lose MAC Offensive Player of the Year Corey Davis, Michael Henry, and Carrington Thompson. If you exclude running back Jarvion Franklin (25 receptions), there’s no receiver on Western Michigan’s roster who’s caught more than 17 passes in his college career. It’ll be interesting to see who steps up to fill the void left by the departed receivers and whether or not the offense continues to roll under the leadership of Tim Lester – who threw for 11,299 yards as the Broncos triggerman from 1996 to 1999.