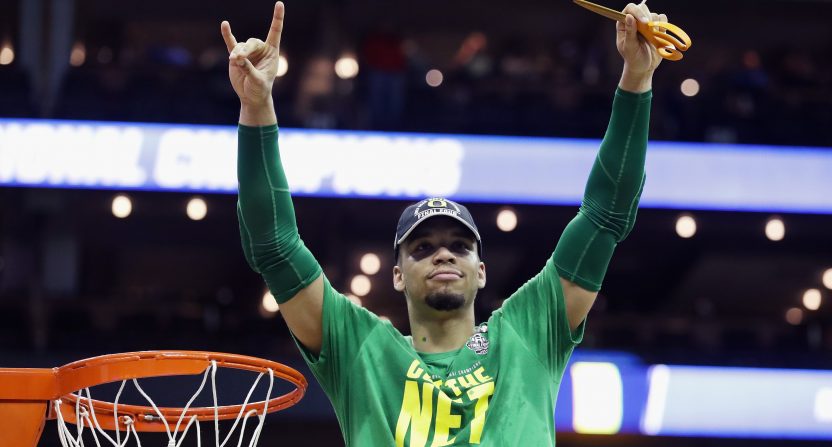 As of Sunday evening, the Final Four is set: No. 1 North Carolina, No. 1 Gonzaga, No. 3 Oregon and No. 7 South Carolina will face off next weekend in Glendale, Arizona to determine college basketball’s champion.

In some ways this is a traditional Final Four—two favorites, a sleeper and a mild Cinderella—and in other ways it is highly unusual. While North Carolina is a perennial title contender, the other three teams have a combined one Final Four appearance to their name, and that came in 1939.

Here’s what a berth in the Final Four means for each of the four participants.

They finally made it!

After years of near-misses, the Zags are in the Final Four, and it’s hard to overstate how big that accomplishment is for the program.

Gonzaga’s spot in the Final Four forces us to totally change how we talk about this program. Over the years, a tiny school that no non-hoops fan outside Seattle has even heard of has somehow become branded as an underachiever. This Final Four berth means it’ll be a while before you can wave off Gonzaga for having a strong record against weak opposition and even longer before you can comfortably pick the Zags to lose in the second round of the NCAA Tournament.

More so than for the other three schools in Glendale, this Final Four is program-affirming for Gonzaga.

Making the Final Four is obviously less a big deal for North Carolina than for any of these other schools. The fans are used to playing deep into March, Roy Williams has been here nine times before and his players played in the Final Four just last year.

Still, that doesn’t mean the Tar Heels aren’t pumped to be involved.

For North Carolina, this Final Four berth is about winning one more game than last year, when the Tar Heels lost to Villanova on a buzzer-beating 3-pointer in a thrilling title game. After coming so, so close to a championship, you imagine the players so desperately want to hoist that trophy.

In the big picture, next weekend could reinforce the program’s creme-of-the-crop status and Roy Williams’ spot on the list of greatest ever college coaches. A title would be the sixth in North Carolina history, pushing the Tar Heels past Duke and Indiana on the all-time list. It would also give the program its third championship of the 21st century, putting UNC alongside Duke and UConn in that category.

Meanwhile, Williams is already fourth all-time in Final Four appearances. If he wins two more games, he’ll be one of only six coaches with at least three rings, and it’ll be impossible to deny his status as an all-time great.

Given North Carolina’s history, making the Final Four is all about a shot at winning another title.

In a very short period of time, Oregon has emerged as a bona fide basketball power.

The climb has been steady. After missing the NCAA Tournament in Dana Altman’s first two seasons at the helm, the Ducks made the Big Dance and won at least one game there each year from 2013-15, then took the next step in 2016, earning a No. 1 seed and reaching the Elite 8. Now they’re in the Final Four.

Making the Final Four increases the odds this run of success will continue after the current crop of stars leaves. A Final Four berth signifies to fans and recruits that Oregon’s newfound basketball prowess isn’t a novelty. This program looks like a serious contender moving forward.

This is not Oregon’s first ever trip to the Final Four, but few living fans will remember the last one, which came in the first ever NCAA Tournament, in 1939. That year, Oregon won the title. If Altman and company can repeat that feat this year, now THAT would put the program on the map.

The Gamecocks aren’t pure Cinderellas—they won 12 SEC games, spent time in the Top 25 and earned a No. 7 seed—but they’re easily the most surprising team at the Final Four. Before this year, South Carolina hadn’t won an NCAA Tournament game since 1973 and had never made the final weekend. This could be the best Gamecocks team ever, and the folks in South Carolina will probably be talking about this team for a while.

It will probably take more than one Final Four appearance for anyone to think of South Carolina as a basketball school, but this achievement should certainly inject some life into a program that has been dormant for a while.

On and also, this Final Four berth might mean Frank Martin and Sindarious Thornwell get statues in Columbia.