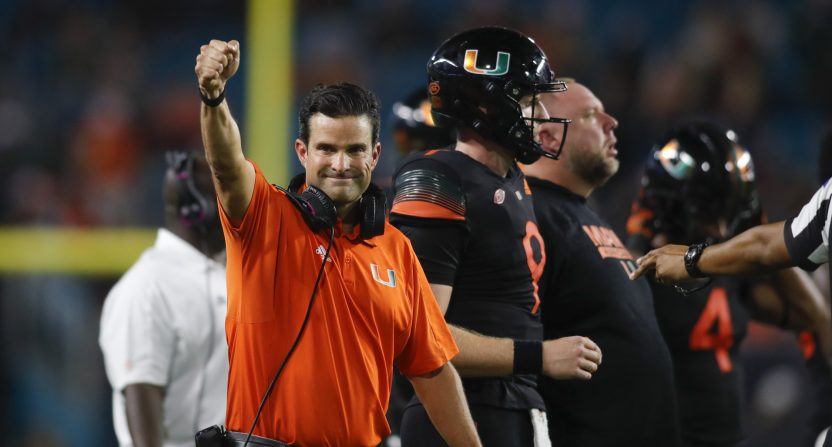 The Miami Hurricanes hired Mario Cristobal on Monday to make him their new head coach. However, they had to fire Manny Diaz first, which they did just prior. Diaz had been well aware that this was a possibility as Miami pulled out all the stops and spent ungodly amounts of money to attract Cristobal even as Diaz was still out recruiting for the school.

The whole situation seemed a bit gross, even for a sport where coaches just up and leave at a whim after chastising student-athletes over loyalty. Diaz was publicly hung out to dry for days and then had to rush to make a statement as the school was already championing his replacement.

He did release a statement on Monday that started with some sentiments that made it clear how he felt about the whole thing.

“I am disappointed in the University’s decision and the manner in which this played out over the last few weeks,” Diaz said. “The uncertainty impacted our team, our staff, and their families – these are real people that gave everything to this program. For that, for them, I hurt.”

From there, Diaz launched into the usual diatribe, about how proud he was of the program and the players he coached. But it was clear that the whole thing left him feeling salty, especially when it’s not as though Miami was a losing program under him. They just didn’t win enough based on expectations at The U.

Reactions from the college football world were mixed, with many defending Diaz while others pointed out that he bailed on Temple after accepting that job to turn around and take the Miami one. The circle of college football life ever turning.

Treated with such disrespect. You don’t do that to a coach who has sacrificed years to try and build something, regardless of how it turned out or how much you dislike them. https://t.co/WVvcmx88u3

Good for Manny to call UM out for the completely unprofessional way this was handled. 👏 https://t.co/i3MR4mLl3v

Miami alums, even those who wanted a new coach, should be deeply embarrassed by this clown show of a two weeks. Watch your back, Mario. https://t.co/PJUBoYPRTW

Question the W-L results, but Manny gave everything he had to this program as DC and HC and that is indisputable. What will stick with me most about this season is the way his players fought until the end. That is a tribute to him, even if they did not win enough for him to stay. https://t.co/wBOx1J2zpd

Diaz is pretty likely to catch on elsewhere as a head coach. He led Miami to two winning seasons in his last couple of years there and has a solid resume to work with. He might not get a P5 job, at least right away, but he joins the long list of college football coaches fired not because they were bad but because they weren’t as good as the fanbase and boosters think the program should be.

That doesn’t always work out too well, just ask Nebraska.