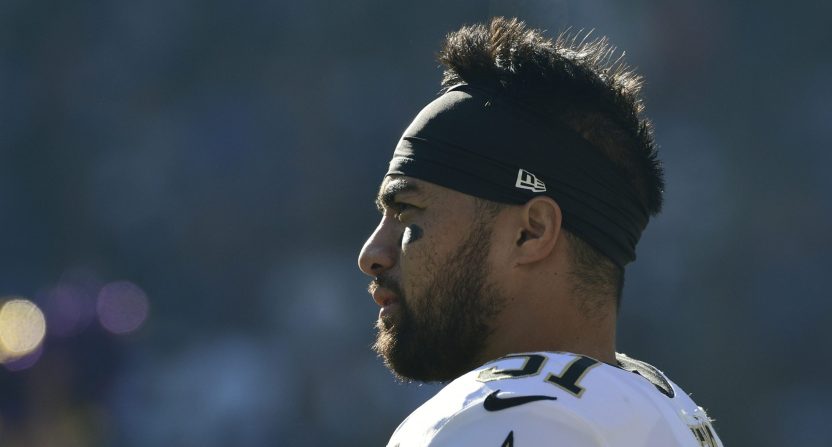 During his senior season at Notre Dame, linebacker Manti Te’o became one of the season’s most sentimental stories when it was revealed that his grandmother and girlfriend had died within a short time of each other. Shortly after the season ended, it was revealed that while Te’s grandmother actually passed away, the girlfriend was a hoax and that he was catfished. Now, a decade later, a documentary has been made about that.

On Tuesday, Netflix debuted a documentary in its Untold series titled, The Girlfriend Who Didn’t Exist. Te’o was on CBS Mornings talking about what happened. Specifically, he talked about how his mindset changed as the narrative around him changed, going from overwhelmingly positive for much of the season to decidedly more negative when the hoax was revealed.

“You find a lot about yourself when the narrative is now negative,” he said, “You really find out, how much do I really weigh people’s opinions of me? I didn’t realize how much I really cared about people’s opinions because prior to that it was all positive. When it’s all praise and its congratulations, it’s like ‘This is great. Like, I’m fine.’ But then it turns negative and then you’re like, ‘OK, who am I?’ Who am I before the praise? Who am I, you know, before all the criticism? And so, there’s a lot of self-discovery there?”

Football star Manti Te’o, whose catfishing experience is featured in a new docu-series, shares how he responded to the negativity when the story of his relationship was first revealed: “You find a lot about yourself when the narrative is now negative.” https://t.co/k2daLBuzGX pic.twitter.com/21kWZmLxdv

Ever since the dead girlfriend was revealed to be a hoax, the attitude around Te’o has been polarizing. This situation was no different.

I learned this lesson quickly. You really find out who your friends are when the narrative of your life turns negative. https://t.co/wz7BAO64DI

Awesome series. Happy he can really turn the page of this chapter of his life. I sees you uso’s @shiloah02 @RobJob293 🤟🏽 https://t.co/j308oFdi1F

i felt so incredibly sad for him. All these people really ruined his career. https://t.co/5xf5MMIlKX

He also had people less than convinced.

Thought he made it all up to raise his Heisman chances. https://t.co/qWKbUtvfcp

Shortly after the hoax was revealed, Te’o was drafted by the then-San Diego Chargers in the second round of the 2013 NFL Draft. He remained with the Chargers for four seasons before signing with the New Orleans Saints, where he played for three years. Te’o played for the Chicago Bears in 2020 and has not been in the NFL since.