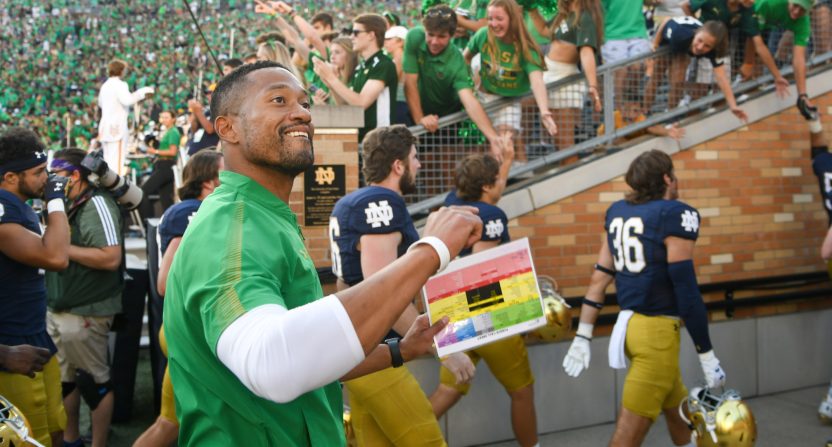 Marcus Freeman came into the 2021 college football season as one of the hottest assistant coach prospects in the nation. A finalist for the Broyles Award for his work at Cincinnati, he was named 247Sports Defensive Coordinator of the Year in 2020 as well.

With his pick of high-profile defensive coordinator positions, Freeman chose Notre Dame over LSU. Ironically, Kelly has now left Notre Dame to be the head coach for the LSU Tigers, and there’s a report that he wants Freeman to follow him and become, presumably, the highest-paid coordinator in the nation.

However, Freeman also has to consider that there is a decent chance he’ll be in the running to be the head coach at Notre Dame.

And also, if Notre Dame hires Luke Fickell away from Cincinnati, Freeman is the ideal and perfect candidate to take over that job instead.

And even then, there are also other scenarios that could play out that lead to Freeman in a new role.

Marcus Freeman gets passed over for the Notre Dame job for Luke Fickell, Ohio State gives Freeman an Illuminati offer to coordinate the defense. Circle of life.

At the very least, Freeman is expected to be part of the coaching staff in Notre Dame’s bowl game, assuming he doesn’t follow him to LSU. Notre Dame AD Jack Swarbrick has said that the Irish may not have an interim coach but, if they do, that person will not be in the running to be the head coach. So we’ll keep an eye on how that plays out. According to Pete Sampson, there is a lot of internal excitement over ultimately elevating Freeman, who checks a lot of boxes for the program and the school.

As we’ve said previously, Freeman could make a lot of sense as a continuity hire, ideal for keeping players from transferring and recruits from de-committing. Plus, given that every major college football job so far this cycle has gone to a white coach, it would be really great to see a black coach get elevated into a role like this instead of getting passed over for someone else.

Of course, there’s also the question of whether or not the 35-year-old is ready to settle into a job like this. Being the head coach of Notre Dame comes with lofty expectations, the kind that even Kelly fell short of despite being an immense success there. It’s the kind of job built to wear a person down.

Also, if you're Marcus Freeman, are you really certain you're going to be Notre Dame head coach for 30 years?

History shows us that even the best of the best wear out in South Bend after 10-15 years (Leahy, Parseghian, Holtz).