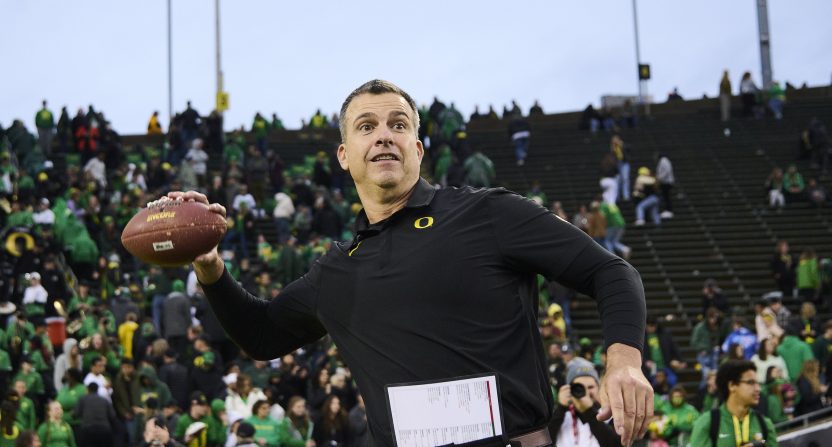 We’ve seen a few college football coaches up and leave their programs seemingly overnight in the last few weeks. Everyone seems to do things a little differently.

Lincoln Riley bolted without saying anything to anyone. Brian Kelly texted his players after the news broke and then met with them for two minutes the next morning.

As for Mario Cristobal, it sounds like he took the time to meet with his Oregon players before leaving to take the Miami Hurricanes job. And in an extra step that you don’t see too often, Cristobal essentially did an exit interview with John Canzano when he called into the statewide radio program on Monday night before departing for Florida.

Here’s the podcast of our 10-minute talk and details: https://t.co/uGADwNe0He

“It’s OK for people not to understand. It’s OK for people to be upset. It’s OK for people to be happy. I don’t judge,” said Cristobal, when asked about people who don’t understand why he’d give up a good gig in Oregon for the wild expectations of Miami. “When granted an opportunity like I had for the past five years it’s just 100 percent in, all-in, every ounce and you can look in the mirror at night when you do something like that. It’s hard. It’s unexplainable to put in words, the difficulty of moments like this. Players and coaches we are in a profession that is as wild and as crazy, as untimely as you an imagine because there is no structure when it relates to moves with both players and coaches. You always hope and pray you surround yourself with good people…. and you keep going. Grateful beyond belief. I appreciate you giving me this opportunity to express gratitude.”

Cristobal also hyped up Oregon’s recruiting classes (“Their best football is over the next two and three years.”) and talked about the state of the program he’s leaving behind (“We were right there on the cusp.”).

Whatever you think of his decision to take the job, a lot of folks around college football, especially in Oregon, seemed to have a high opinion of the way Cristobal walked out the door and handled himself.

Great interview. You can hear the pain in his voice. A man of high character. Best of luck to him going forward and heading home. https://t.co/kdxahdpAA8

Can’t think of many other coaches who would do this. Cristobal is a class act. Wish he was staying in Eugene. https://t.co/b20qWcx12S

He may not have made the decision you liked, but he is still a man of character and integrity. I’ve had coaches leave a note at our locker and never show up again!! https://t.co/yMbrUsperb

I give Cristobal credit for calling into John’s show https://t.co/t0rRrRgwa7

Cristobal will be officially introduced at Miami today and a new chapter begins for both him and those he leaves behind in Oregon. And regardless of whoever they end up hiring, clearly, he left that program in very good shape for the immediate future.