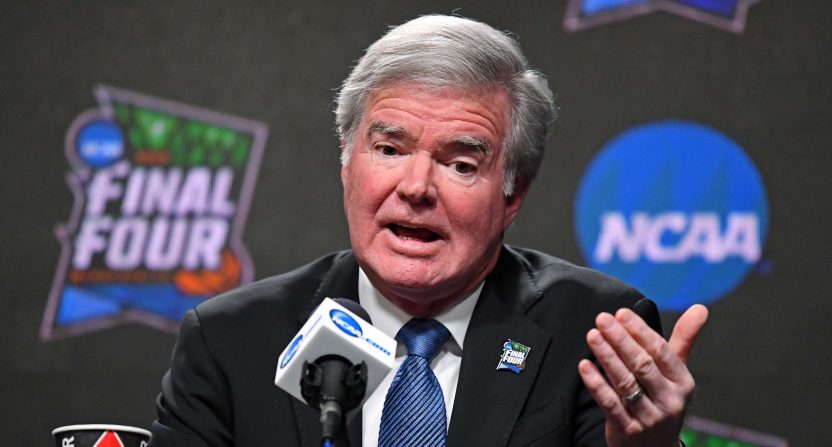 Mark Emmert has been president of the NCAA since 2010 and, for better or worse, has been the face of the governing body during a time when college athletics has undergone massive transformations in spite of what the organization might have preferred. It was announced on Tuesday that Emmert will step down from that role by June 30, 2023.

“Throughout my tenure, I’ve emphasized the need to focus on the experience and priorities of student-athletes,” said Emmert in a statement. “I am extremely proud of the work of the Association over the last 12 years and especially pleased with the hard work and dedication of the national office staff here in Indianapolis.”

Emmert will be 70 in December and signed an extension last April that would have kept him on in this role through 2025. Prior to leading the NCAA, Emmert was president of the University of Washington and chancellor at LSU.

While the NCAA can probably point to a lot of positives that happened under Emmert’s watch, he will likely be remembered for all of the ways the governing organization failed to meet the moment as societal and economic changes alter the landscape of college athletics during his tenure.

Emmert was in charge of the NCAA when the Penn State-Jerry Sandusky scandal rocked the nation, followed by subsequent scandals at Baylor and Michigan State, amongst others. He also had to deal with the O’Bannon v. NCAA case and the way it changed opportunities for student-athletes. The NCAA has had to answer for inequities between male and female athletes in recent years, the rise of NIL and player endorsements, the impact of legalized gambling, and various high-profile violations and infraction punishments that often seemed to defy logic and reason.

Emmert also had a tendency for being tone-deaf while making millions of dollars overseeing thousands of amateur athletes who generated millions more for their universities. Just last year he took heat for saying “being a university president is the hardest job in America.”

In one of his final public moments as NCAA prez, he misidentified the men’s basketball team that had just won the national title, a perfect encapsulation of how people think of him.

Suffice it to say, a lot of people really didn’t like him.

All of which is to say that the reaction around the college sports world to Emmert’s impending retirement has been interesting, to say the least.

Remember when Emmert and the NCAA lost unanimously in the modern Supreme Court and then just decided to punt on actually figuring out how things would work afterwards? What a legend.

Mark Emmert lost $100 million more than once and in multiple jobs, and kept advancing his career.

Never let someone tell you your dreams aren't possible. https://t.co/nhpQlUIVJO

Mark Emmert did a truly bad job as NCAA president. He put the NCAA in bad positions, cost them a lot of money, was really obnoxious if people questioned him. Luckily he was also bad at trying to prevent college athletes from getting paid and lost most of the fights he chose

You thought Mark Emmert was useless before? Let me introduce you to 14-month lame duck Mark Emmert. https://t.co/DQusgAFyry

Mark Emmert saw the NCAA’s power grab slip away, the evolution of NIL, another massive wave of conference realignment looming…and this is his response: pic.twitter.com/k5hEkclWkw

NCAA president Mark Emmert is retiring. I told my boss I wanted to write, but asked him: "Is it cruel for me to kick him in the a– on his way out?"

And my boss wrote back:

"I don't know what else you'd write."