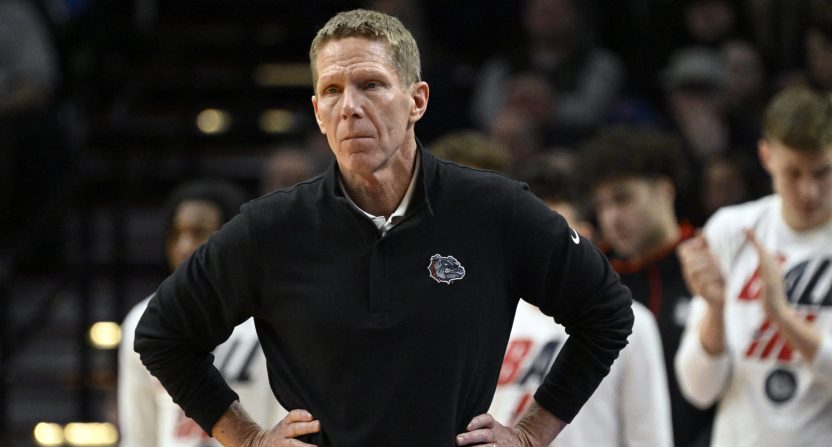 Following their upset loss against Arkansas in the Sweet 16, the Gonzaga Bulldogs are out of the 2022 NCAA Tournament. With the early exit, head coach Mark Few is catching some criticism.

In a single-elimination tournament, it’s hard to be too surprised about any upset. Over one 40-minute game, anything can happen. But following the game, Few expressed his surprise at the defeat.

Gonzaga coach Mark Few to CBS: "We're not used to losing in this round over these last four or five years. We've been able to advance past this round and keep it going, so I think we're a little bit in shock."

Few also referenced how Gonzaga had been at or near the top of the rankings for the entire season, which no other top teams had done. That drew an obvious response.

“We were number one at the beginning of the year, and we were the only ones being able to hang on to it. Everyone else kept falling off.”

Mark Few just said that with a straight face. Coach, you play high schools all year. I like him usually, but that was desperate.

To the point Mark Few made, I would say you all held #1 throughout the year while others “fell of” as you put it, because y’all didn’t play anybody. lol

But beyond just postgame comments, Few’s consistent NCAA Tournament struggles were a source of conversation.

waiting for Mark Few to lead Gonzaga to a title pic.twitter.com/7ScjnSOpM6

Mark Few and Gonzaga have been dominating the WCC/regular season since the ‘99-00 season (23yrs) and have two Final Four appearance and zero titles.

So when exactly does Mark Few start taking some heat? You say they’re a blue blood now. Come out of garbage conference and have one seed after one seed.

There was another major talking point in the aftermath of the loss. If the in-game coaching of Few isn’t the reason that Gonzaga consistently falls short in March, maybe the kind of players on the team has something to do with it.

Gonzaga has the Duke label of the late 80s/early 90s as the best program to not win it all…Mark Few still hasn't found his Grant Hill. In this current climate, he may never… https://t.co/hADGV28ufa

Nobody else is gonna say it… i will… Mark Few needs to go to the TRENCHES and recruit more DOGS!! They lose in the NCAA Tournament every year to the type of basketball players they don’t ever recruit!!

Mark Few gotta start adding some kids who ain’t always have a ride home after practice in middle school.

Few took over the Gonzaga program in the 1999-00 season. The year before, the Bulldogs had reached the Elite Eight under Dan Monson.

Gonzaga has reached the NCAA Tournament every year in Few’s tenure (except in 2020, when then Bulldogs were 31-2 but no tournament was held). And while Gonzaga does tend to play a weaker schedule, it’s not as though the Bulldogs have no-showed in March Madness. That’s happened occasionally. But Few’s teams have gone out in the Sweet 16 now seven times, the Elite Eight twice and have reached the National Championship Game on two occasions (2017, 2021), losing both.

But until Gonzaga cuts the nets down at the end of the National Championship Game, Few will continue to come under fire.