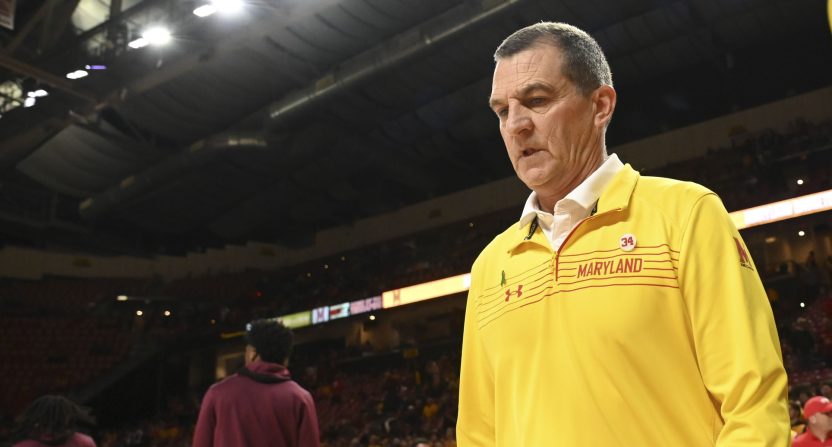 College head coaches making surprising in-season decisions to leave their program is all the rage these days and Maryland Terrapins basketball coach Mark Turgeon is the latest person to do it.

Just a day ago, Virginia football coach Bronco Mendenhall announced he was stepping away. This was a season in which LSU Tigers coach Ed Orgeron agreed to part ways after the year was over. Virginia Tech’s Justin Fuente and TCU’s Gary Patterson both also “parted ways” immediately in the middle of the season.

The latest trend is now officially in college basketball as Turgeon shockingly ended his 11-year stint as Maryland’s head coach on Friday following a 5-3 start.

BREAKING: Maryland and Mark Turgeon have mutually agreed to part ways, per release.

“After a series of conversations with Coach Turgeon, we agreed that a coaching change was the best move for Coach Turgeon and for the Maryland Men’s Basketball program,” Maryland athletic director Damon Evans said. “He has dedicated over a decade of his life to the University of Maryland and has coached with distinction and honor. He leaves College Park as the 2020 Big Ten Conference champion and with more than 225 victories. He’s a great coach and a great person, and I wish Mark, his wife Ann, and his entire family all the best in the next chapter of their lives.”

“After several in-depth conversations with Damon, I have decided that the best thing for Maryland Basketball, myself, and my family is to step down, effective immediately, as the head coach of Maryland Basketball,” Turgeon said. “I have always preached that Maryland Basketball is bigger than any one individual. My departure will enable a new voice to guide the team moving forward.”

While Turgeon compiled a solid regular-season record in his 10+ seasons in College Park, going 226-116, post-season success always seemed to elude his Maryland teams. Turgeon led the Terps to the Sweet 16 just once, back in 2016, and has been falling back into the pack of the Big Ten in recent years. Not the results that the school was hoping for when it moved from the ACC to the Big Ten in 2014.

One interesting thing that college fans on social media noticed was that Turgeon’s last game as Maryland head coach was a loss to Virginia Tech. That coincides with Mendenhall, who called his tenure quits immediately following a loss to Virginia Tech as well. Perhaps that’s the secret sauce to this rash of “parting ways.”

That’s two schools – Virginia in football, Maryland in men’s basketball – that have parted ways with their head coach after losing to Virginia Tech.

In the last 24 hours, both Maryland Basketball and Virginia Football unexpectedly parted ways with their Head Coach, immediately after a loss to Virginia Tech.

Between Bronco Mendenhall & Mark Turgeon, apparently losing to Virginia Tech in any sport is grounds for immediate dismissal from your job. 🤷‍♂️

If you include Justin Fuente, that's three head coaches who immediatelt left their jobs after being worn down by Virginia Tech.

Danny Manning is the interim coach for Maryland while they decide how to move forward. Meanwhile, it’s possible we’ll see Turgeon resurface somewhere else soon. He has a solid track record of success in multiple places now, even if his Maryland run ends with a whimper.