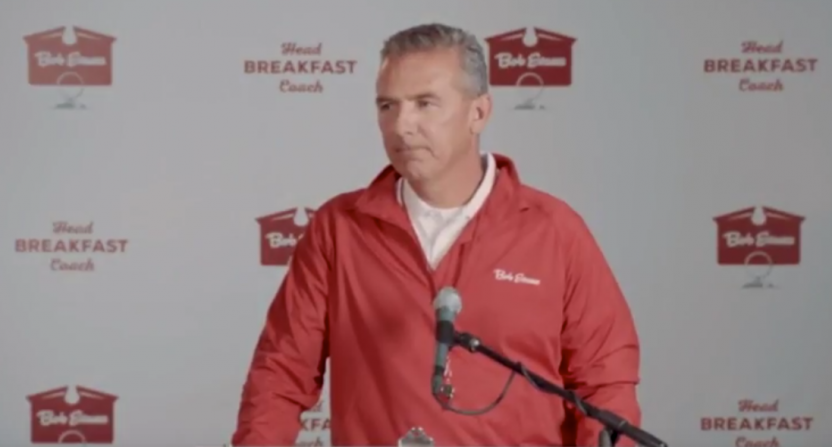 On July 27, the Ohio-based restaurant chain floated the idea of their Head Breakfast Coach as part of an upcoming marketing campaign meant to coincide with the upcoming football season. So far, so good. On July 30, they officially introduced Meyer as said HBC.

I’m excited to announce my partnership with @BobEvansFarms to help raise the bar on breakfast, with all proceeds going to the Urban Meyer Family Foundation supporting multiple charitable organizations. Bob Evans guests can expect our A-game for every meal. https://t.co/QPIYzfnl8O

Meyer made a series of videos promoting the partnership, saying in one that he was “looking forward to a winning season.” By all accounts, that was the only thing anyone was thinking about regarding Meyer and Ohio State, in spite of a recent report that Meyer’s longtime assistant Zach Smith was a serial domestic abuser. Meyer said at the time that he was completely unaware of anything beyond the initial incident that took place in 2009.

As you no doubt know by now, things changed very quickly.

On August 1, Brett McMurphy took up the challenge Meyer presented to him and proved that the coach was aware of incidents that happened in 2015 and continued to employ Smith regardless. Furthermore, the breadth of the abuse and the lack of care for the woman at the center of the allegations was simply too much for anyone to ignore. Meyer was placed on administrative leave while Ohio State conducts its own investigation into the allegations and now there’s a decent chance that Meyer loses his job, or at the very least gets some kind of suspension.

All of which is to say that by the time August 2 rolled around, Bob Evans decided to make some alterations to their Head Breakfast Coach campaign.

On July 30, @BobEvansFarms announced a partnership with #UrbanMeyer as the brand's new 'Head Breakfast Coach'. Per @columbusbiz1st, he's no longer featured on the website.

What’s wild is that, as of the time of this writing, Bob Evans hasn’t actually taken down the tweets introducing Meyer as their spokesperson. You’d think they’d want to delete those suckers into the sun.

The link in the tweet has been changed to simply to go the company’s homepage, however. If there was an announcement made on the company’s Facebook page, that appears to have been taken down.

(UPDATE: they have finally deleted the tweet, which we’ve preserved below) 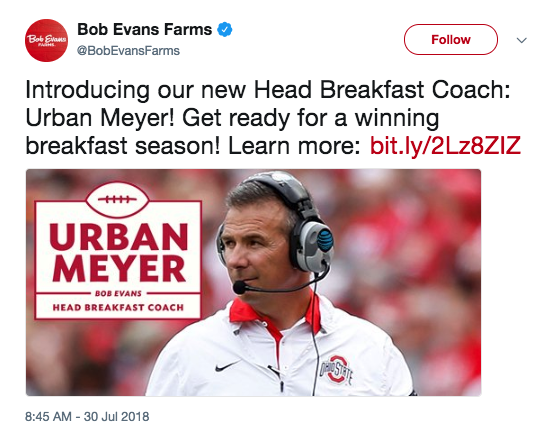 Bob Evans also issued a statement, announcing the partnership with Meyer has been suspended.

At Bob Evans Restaurants, we believe strongly in the family first values upon which the company was founded. We are suspending the current partnership with Urban Meyer and removing all related content pending the results of the official Ohio State University investigation.

It’s unclear if the company is scrapping the campaign altogether or simply waiting to ride out whatever decision Ohio State makes and then make their move. Even if Meyer is somehow cleared and continues coaching, this saga is going to consume the entire season and everything that happens from here on out, so it doesn’t sound like a great idea to keep him around no matter what. Surely you can find another Head Breakfast Coach who doesn’t come with this kind of bad situation.