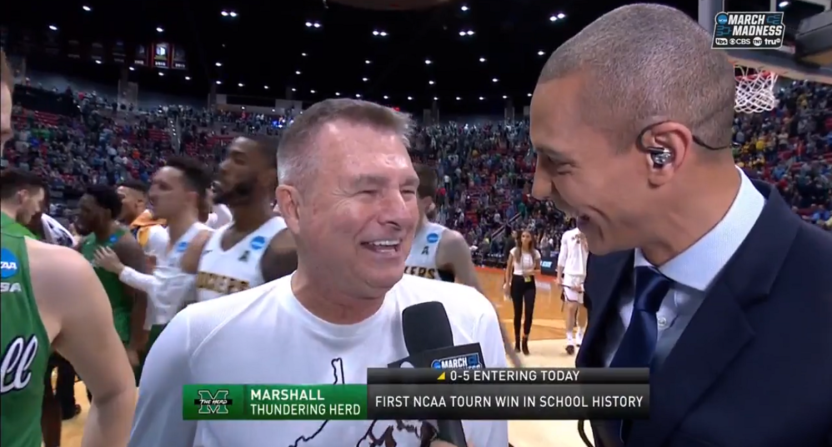 In one of the bigger upsets of the tournament so far, 13-seeded Marshall took down 4-seeded Wichita State in San Diego, holding on late to win 81-75 for their first NCAA Tournament win ever.

Riding the hot shooting of junior guard Jon Elmore, the Thundering Herd ruined a few brackets and survivor pools by greatly outperforming their KenPom projection and shocking the Shockers.

Elmore was fantastic, going for 27 points on just 13 shots from the floor (4-8 from downtown) and 11-15 shooting from the foul line. Elmore added four assists, four rebounds, and two steals, along with a healthy respect for his own limitations in a post-game interview:

D’Antoni also talked about his team’s style in his post-game interview, comparing it to his brother’s in the NBA.

The Herd probably played above their heads, and they’re not deep at all (they played just seven players), but their offensive system is familiar to anyone who’s watched a D’Antoni team; when they get good looks, they pull the trigger, and on days shots are falling that’s often enough to beat anyone, including either West Virginia or Murray State, one of whom will play Marshall on Sunday.

Wichita State never looked comfortable, shooting just 42% from the floor and 30% from three, turning the ball over 15 times. Marshall had 11 steals, including a few key moments late, and while the officiating was hardly great (both in terms of judgment calls and replay management), this was not an undeserved loss for Wichita State.

Star guard Landry Shamets had 11 points and 8 assists, but took 13 shots for those points and had 4 turnovers to go with the assists. The bracket impact was big, too:

Wichita St.’s upset loss to Marshall today will do some serious damage to a lot of brackets. 86.5 percent had them winning today, 43.4 percent advancing to the Sweet 16, 7.8 percent to the Elite 8. https://t.co/mwN33GYEGH

It’s been a really fun few days to start the Tournament, and hopefully the excitement keeps coming this afternoon and evening.