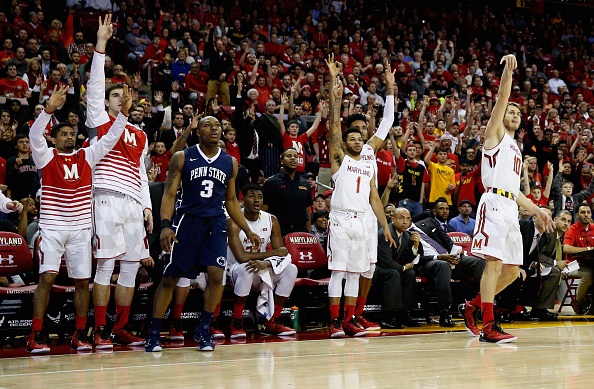 Maryland basketball entered Wednesday night’s Big Ten opener against Penn State as a top-five team in the country and arguably the conference favorite. The Nittany Lions came in with a mediocre 9-4 record, with losses to Duquesne and Radford.

And yet, with six and a half minutes to play Wednesday, Penn State led the Terrapins 58-45 and the world was upside down. Then Maryland freshman Diamond Stone took over, outscoring the Nittany Lions 16-6 by himself as the Terrapins won 70-64. Stone finished the game with 39 points and 12 rebounds. Still, Wednesday night was enough to put a scare into a Maryland team with national title hopes.

That close call came one day after the Big Ten’s other top team, Michigan State, suffered a surprising defeat to Iowa. Combined, those results raised the question, “Is the Big Ten any good?”

No. 1 Michigan State (who will drop following their loss) and No. 4 Maryland are two of only three Big Ten schools in the Top 25 (along with No. 14 Purdue) in both major polls, with no other team from the conference even knocking on the door.

Entering this week, conventional wisdom said that the Big Ten was top-heavy, with the Spartans and Terrapins leading an otherwise-weak group. But after both of those teams showed significant weakness in their respective conference openers, that narrative could be in trouble.

Of course, Maryland and Michigan State’s struggles this week could certainly be aberrational, examples of great teams stumbling momentarily in a long season. But even if those teams are more flawed that poll-voters have acknowledged, the underrated middle-tier of the Big Ten makes up for their shortcomings.

Iowa is 10-3 despite a strong schedule, with wins over two top-25 teams. Indiana is supremely talented and only seven points away from being 13-1. Northwestern is off to the best start in program history (13-1), soft schedule or not. Michigan has had its moments between losses.

Despite some fuss over the Big Ten’s demise, the conference looks likely to get at least six and probably seven or eight teams in the NCAA Tournament, just like usual.

Here’s where this year’s Big Ten teams stand in KenPom’s rankings compared to the past two years.

The top of the conference isn’t overwhelming (but also no worse than other seasons), but the middle class is as strong as it has been.