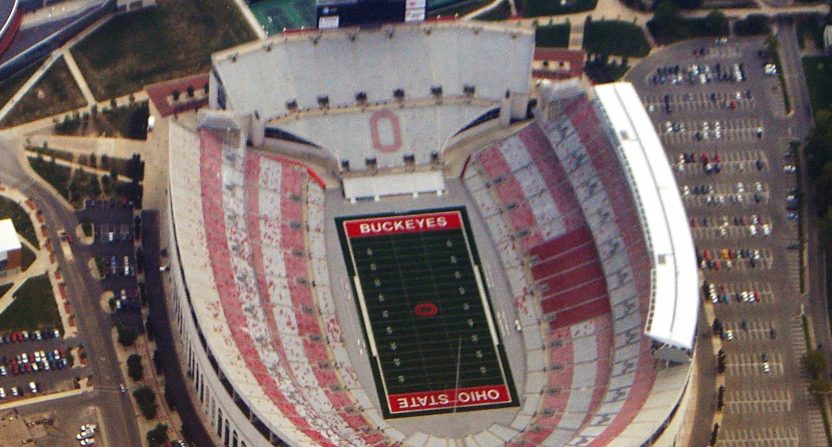 One of the stranger college sports stories in a while comes from the Ohio State Buckeyes, where the school released a report and statement Thursday on the results of an investigation into a 41-year-old female massage therapist. The investigation, commissioned by the school but conducted independently by Columbus law firm Barnes & Thornburg, found that the woman “engaged in inappropriate and exploitative behavior targeting members of the Ohio State football team.” The therapist in question has now had her license revoked by the state medical board, and the school has banned her from campus and from contacting any members of their athletics teams.

This started in March 2020 with a complaint to the State Medical Board of Ohio about this therapist, which alleged that “a female licensed massage therapist was offering free therapeutic massages to members of the Ohio State University football team, using those massages as a means to initiate sexual interactions with some of the football student athletes, and then demanding payment.” The therapist in question did not work for the university, but the school got involved in March 2021, which the report states is when it was brought to their attention. Here’s the university statement on this, via Dan Hope and Colin Hass-Hill at Eleven Warriors:

In March 2021, the university became aware that the State Medical Board of Ohio investigated an independent massage therapist who engaged in inappropriate and exploitative behavior targeting members of the Ohio State football team. The university has confirmed that the Medical Board has taken action, and this individual has had her license permanently revoked.

Our first concern and top priority is for the safety and well-being of our student-athletes. Within days of learning of these allegations, the university quickly launched an independent investigation of the matter. An experienced legal and compliance resource, Barnes & Thornburg, led the independent investigation, and has completed its work. Barnes & Thornburg found that no university or athletic department staff had knowledge of the massage therapist’s activities. Her actions were part of a scheme to exploit football student-athletes and were in violation of her state license. In addition, Ohio State does not believe the massage therapist’s actions trigger NCAA rules or form the basis for NCAA violations. While no self-reporting is required, Ohio State proactively shared the exploitative behavior with the NCAA, and a report has been made to the Franklin County Prosecutor’s Office.

For transparency, we are making the report and any associated public records available at this time. All student-athletes on the football team, along with coaches and staff, participated in this process. Based on the findings of the investigation, the university, through its departments of Public Safety and Athletics, has banned the massage therapist from campus and locations where students are lodging or living and has served her with a cease and desist order regarding any additional contact with students, coaches or staff.

It is alleged that the massage therapist began contacting OSU players in person and via social media as far back as 2018 to solicit them for massage sessions.

A complaint was filed with the State Medical Board in March 2020. The matter was tabled until March 2021, when the Medical Board contacted the OSU police department. The police department determined it lacked jurisdiction with many of the activities occurring off-campus. It was passed on to the OSU Office of Legal Affairs, which then sent it to the OSU Office of University Compliance.

The therapist would sometimes charge the athletes for the massages or waive those fees. She sometimes asked for money after sexual activities had occurred. She used her contacts with certain players to build relationships with other players.

The investigation showed there was no contact with minors and the therapist did not use force to engage in sexual contact with the players. The players admitted any such interactions were consensual.

The probe did show, however, it was “a calculated effort to harass and get close to Ohio State student-athletes.” Smith discussed that while the players are men they could also be targets for a predator as in this situation. He said players were provided psychological counseling as needed.

As per the Eleven Warriors piece, Smith said that Ohio State has also sent this report to the NCAA and the Big Ten, but the NCAA agreed with the report and with Ohio State’s position that “players did not receive any benefits that would constitute NCAA violations.” So there may not be anything further that comes of this. But it’s certainly an odd story, and one that’s led to some significant consequences for the woman in question.