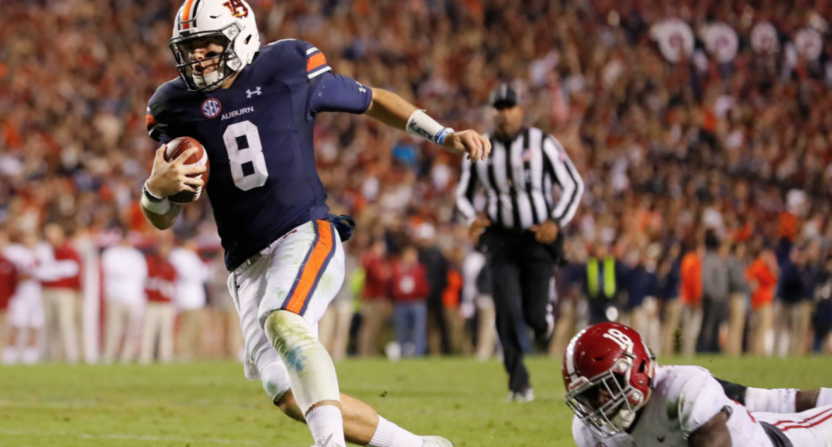 Every year when the college football season plays out, we are given a so-called inside look at how the selection committee for the College Football Playoff is operating and evaluating the current contenders for the national championship.

While there have been some mild concerns with this process each of the three years this format has existed, it looks as though we will once again be seeing something new. There is also a good chance we could see this committee squirm a little, which is good. They get to fly to these weekly meetings to create new rankings, so why not make this committee actually do a little work?

After this past weekend of college football, the selection committee has some interesting scenarios to consider. Most of the top teams managed to take care of business on the final full regular season weekend over Thanksgiving. But Alabama had the most difficult hurdle in front of them with a road trip to Auburn, and the Crimson Tide fell on their faces trying to clear it. Auburn’s win over Alabama dropped the Crimson Tide into a crowded field of one-loss teams and sent the Tigers to the SEC Championship Game this week. An Auburn win over Georgia on Saturday will very likely send the Tigers to the College Football Playoff for the first time and would result in the first two-loss team participating in the playoff.

But the consensus seems to feel that an 11-1 Alabama is still heading to the playoff, setting up a potential Iron Bowl rematch in the postseason. So a couple of questions arise. The first is the most important one of all: Does an 11-1 Alabama deserve one of the top four spots in the playoff rankings? And if so, what is the defense for that? Two wins against top 25 teams (LSU and, depending on where they fall after losing the Egg Bowl, Mississippi State)?

Pay close attention to where the selection committee drops Alabama in this week’s ranking. The AP and coaches polls dropped Alabama to No. 5. The playoff committee doesn’t always fall in line with the traditional polls, but No. 5 appears to be the most likely landing spot for Alabama, thus putting them on the doorstep of the playoff. Also worth paying attention to is where Miami falls after losing on the road at Pittsburgh. It was just their first loss, but the Hurricanes fell on the same weekend when Notre Dame, one of Miami’s signature victories, suffered a double-digit loss against Stanford.

Alabama’s loss presents a number of scenarios that will be fun to explore. Is Wisconsin a lock to stay ahead of Alabama if the Badgers win the Big Ten? Probably. But Ohio State would, in theory, have two wins over teams currently ranked in the top 10 (Wisconsin, Penn State) and Alabama would have none. But the Buckeyes’ losses are far worse than Alabama’s. Would this committee value wins or losses mores? Odds are Alabama would get the nod over Ohio State, and if that means Alabama fans have to root hard for Urban Meyer this week, I am so here for it.

I usually do this at the end of my column, but today I’ll throw it out early. If the College Football Playoff began today, here is how my top four teams would look:

I think the top three hold the fort this weekend with wins in their respective conference championship games, and I am leaning toward Wisconsin managing to hold off the Buckeyes, but I am least confident in that outcome at this particular moment. But for now, I’m going to stick with the Badgers, which will land them a spot in the playoff. So, for the moment, I’ll stick with the above outlook, which gives us two brand new entrants to the playoff with Auburn and Wisconsin as playoff newbies.

But if we find ourselves debating Alabama or Ohio State, why not just settle it and send UCF to the playoff if they are 12-0?

The end of the regular season means we have entered college football’s coaching carousel, which is already in full operation. Jobs opened up in the places we expected, with Nebraska and Arkansas making their vacancies official, as well as the suspected one at Texas A&M. Arizona State also got in the mix by making a change. Florida hired Dan Mullen to open up a spot at Mississippi State. And UCLA won the Chip Kelly sweepstakes, which is awesome even with a few legitimate questions about how well the pairing will work out.

And then there is Tennessee.

Reportedly ready to announce the hiring of Ohio State defensive coordinator Greg Schiano as soon as Sunday evening, word got out and the backlash of Vols fans forced the school to slam the brakes on the hire. The main reason for the negative response from fans (and most importantly, boosters) was Schiano’s time at Penn State, during which he was an assistant on the coaching staff with Jerry Sandusky.

McQueary’s testimony was deemed not credible enough for prosecutors to act on Bradley or Schiano, and Schiano has since been tied to the Sandusky scandal by being on the Penn State coaching staff at the time and mentioned in the deposition. Bradley and Schiano have each found other jobs in recent years despite that previous revelation. So why was there such an uprising among Tennessee fans?

Hiring a coach with any ties to the Sandusky scandal at Penn State is a reason to pause and carefully evaluate the situation. But for an AD to properly do his or her job, they must make sure the coach they tab to be a head coach will be a hire that is the best possible hire for the future of the football program, one that will be received well by those paying to fund it. In this instance, it appears Tennessee athletic director John Currie failed at this one very crucial part of the hiring process.

The blame here falls entirely on Currie. If he genuinely feels that Schiano is the best possible hire for the Vols, then he should have come out in front of it and address the concerns fans have voiced. Currie’s job is to find the best possible coach for the Tennessee program. Maybe that wasn’t Schiano anyway, but he failed to defend his own decision-making and now Tennessee will pay the price.

Not only may Tennessee have to pay Schiano a buyout settlement for a job he never actually held (which is awesome for Schiano), but now the school has to pay a search firm to assist with the job of finding a new coach as rival programs are already conducting searches and making hires. Considering Tennessee let go of Butch Jones on Nov. 12, that is simply unacceptable.

This craziness is just warming up. Things could be interesting in Nebraska this week.

Well, here’s the lead story on the Omaha news tonight. This is gonna be a long week, isn’t it? pic.twitter.com/zIVIieXk1b

The Mountain West Conference championship game will be played on the signature smurf turf of Boise State this weekend. The Broncos were gifted home-field advantage on the strength of a computer ranking to break a tie, according to a released statement from the Mountian West Conference on Sunday.

OFFICIAL: @BroncoSportsFB to host @FresnoStateFB in the 2017 #MWFB Championship Game on Saturday, December 2. Get your tickets now through either institutional box office!

So what’s the problem with this? For me, it’s pretty simple. Boise State will now host a Fresno State team with an identical overall and conference record a week after the Broncos just lost to the Bulldogs by 11 points. With identical records and a head-to-head victory, why should Fresno State be given the short straw by the conference when deciding who hosts the conference championship game?

This just doesn’t make sense, and it feels so simple to base the first tiebreaker on the head-to-head result when applicable. If Boise State and Fresno State had not played each other this season, relying on a computer ranking as a last resort would have been acceptable after all other tiebreakers were exhausted.

Fresno State is getting screwed here by having to go on the road against a team they just beat. It doesn’t matter who wins this game. It should be played in Fresno.

This week in flag-planting

Texas Tech scored a big win on the road at Texas on Friday. The Red Raiders planted a flag.

Vanderbilt tried planting a flag in Neyland Stadium after blowing out the Vols, and Tennessee showed the most fight of the season in making sure it wasn’t going to happen.

And speaking of flag-planting, Oklahoma Sooners captains kept the memory of Baker Mayfield alive as they walked out for the pregame coin flip on Saturday. Thoughts and prayers to Mayfield, who served a two-play suspension following his antics against Kansas the previous week.

I will remember yooouuuuu

*you grabbed your crotch*

Will you remember meeeeee pic.twitter.com/Si6QPBJvS4

Former Oklahoma head coach Barry Switzer had some thoughts about the reaction to Mayfield, and blamed Madonna and Michael Jackson.

"I blame it on Madonna and Michael Jackson. They started all that grabbing the crotch years ago."

Always stay on your brand, Switzer.

This is a broadcaster arguing with a fan in the stands pic.twitter.com/wTrOfbCeyx

Plays that sum up the season

Connecticut scored a TD on a free play with no time on the clock to bring the score to 22-21 against Cincinnati. Forced to kick from the 18-yd line after an unsportsmanlike conduct penalty after the TD, UConn missed the PAT and lost by 1. #UCONNvsCINCI

Both teams' losing records, explained in a single GIF pic.twitter.com/WKS76t4gXO

Here's how ugly this game is: #FSU had a pick-six, but the picker fell down at the 1. And then was flagged for unsportsmanlike conduct, moving it back to the 16.

Quick picks I may end up changing later in the week