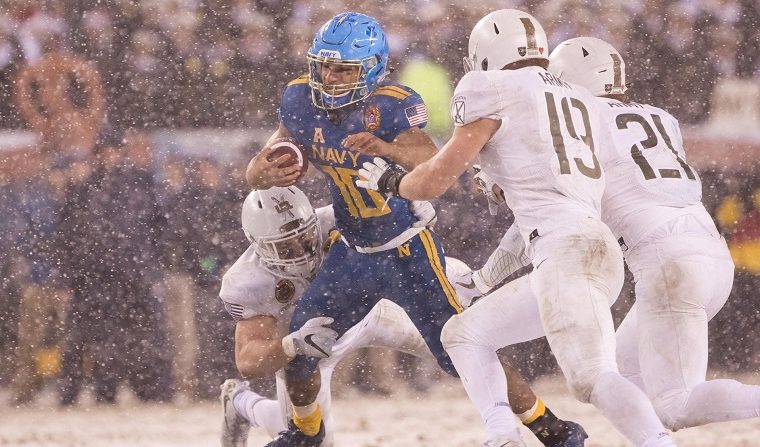 I won’t say too much about how the Heisman Trophy voting went down, because it went pretty much as expected going into the weekend. Oklahoma quarterback Baker Mayfield capped a memorable run by finally winning the Heisman Trophy, and the regional voting breakdown was pretty consistent in voting for Mayfield ahead of Stanford’s Bryce Love and Louisville’s Lamar Jackson. And there was clearly enough separation between Jackson and Penn State running back Saquon Barkley to justify only having three finalists in New York City this past weekend.

Mayfield may have his critics, but his story is a great one for a Heisman Trophy winner. A walk-on player at two Big 12 programs winning the Heisman Trophy is absolutely worth honoring, and he had monster performances in big spots all season long. It was a pretty obvious choice for the Heisman Trophy when it came time to cast the ballots. The Heisman Trust voting panel got it right this year.

So,who are the players to watch in the 2018 Heisman Trophy race? As of now, I’d throw out the names of USC quarterback Sam Darnold if he is back next season and Wisconsin running back Jonathan Taylor. Ohio State running back J.K. Dobbins, and Arizona quarterback Khalil Tate will start the season as buzzworthy names to watch as well. Predicting which players will rise early on next September is difficult right now, of course, but it could be a wide-open field next season.

The Army-Navy Game in the snow was amazing

If you ask me, no rivalry in college football or sports compares to the Army-Navy Game. I wrote about the game last week in this space, but I had to mention it once again because of the weather and the result. The snow fell in Philadelphia all day long, making for an absolutely amazing atmosphere for this year’s playing of the Army-Navy Game. And although my wish to see an Army-Navy Game ending with zero combined passing yards did not come together, we did see a classic in this storied rivalry.

For the second year in a row, the cadets of Army stormed the field as the Black Knights won their first game in Lincoln Financial Field against the Midshipmen. Navy’s last-second field goal attempt fell just shy of clearing the crossbar, as penalties on the final drive for Navy came back to haunt them. It is the first time Army has won consecutive games in the series since the game was played in Veterans Stadium in the mid-1990s. Has the series shifted in Army’s favor under head coach Jeff Monken? I wouldn’t go that far, but the playing field has been evened between the two service academies after years of Navy dominance.

What was the Big Ten doing at the Army-Navy Game?

Want to let your imagination run wild with speculation? The Big Ten had three representatives on hand in Philadelphia for the Army-Navy Game. The most logical explanation for Big Ten reps (not Jim Delany) being in Philly would be they were merely there to enjoy the pageantry and tradition of the Army-Navy Game in person. As far as I could tell, the Big Ten reps in the press box had nothing to do with the game. Could there have been another reason why they were there?

Honestly, I’d suspect no. But don’t let that stop you from trying to force any rumors about the Big Ten being interested in adding Army and/or Navy and kicking Rutgers out of the conference.

My first thought was maybe the Big Ten was evaluating Philadelphia and Lincoln Financial Field as a potential site for a future Big Ten championship game. The Big Ten currently has Indianapolis and Lucas Oil Stadium booked through the 2021 season for its conference championship, where it has been played annually since its inception in 2011 as part of a five-year agreement. The Big Ten has not shied away from floating the idea of moving the game to different sites, and moving the game around the conference’s footprint may have its pros and cons.

Texas made a huge AD hire

Over the weekend, the University of Texas named their replacement for full-time athletics director with the hiring of Chris Del Conte from TCU. This is a massive move for the Texas athletics department, because Del Conte is one of the best in the game. He played a pivotal role in getting the TCU invited to the Big East during conference realignment, and soon after that broke down in tears as he managed to secure an invitation to the Big 12 to bring TCU into the conference he long believed was the perfect place for the school to call home.

As far as football is concerned, Del Conte’s hiring means there is a strong and competent leader in charge overseeing the business decisions that will ultimately impact the Texas football program. With the addition of Tom Herman a year ago and Del Conte as AD now, the future of Texas football should look as bright as it has been in years. Del Conte will bring some new energy and ideas to the table in Austin and he will work every possible angle to provide Herman everything he needs to thrive.

No matter what the history is of a college football program, it is doomed to fail without proper and capable leadership in place to take it to new heights. Texas now has that in place with Del Conte and Herman.

The bowl season officially begins this week! The first Saturday of the bowl season is jam-packed with the New Orleans Bowl, Cure Bowl, Las Vegas Bowl, New Mexico Bowl, and the Camellia Bowl. Sign me up for the Las Vegas Bowl between Mountain West Conference champion Boise State and the first official game of the Mario Cristobal era with Oregon.

Enjoy the bowl season, folks! If you missed it, here is our ranking of this year’s 39 bowl games. And if you think there are too many bowls, go complain about it elsewhere.