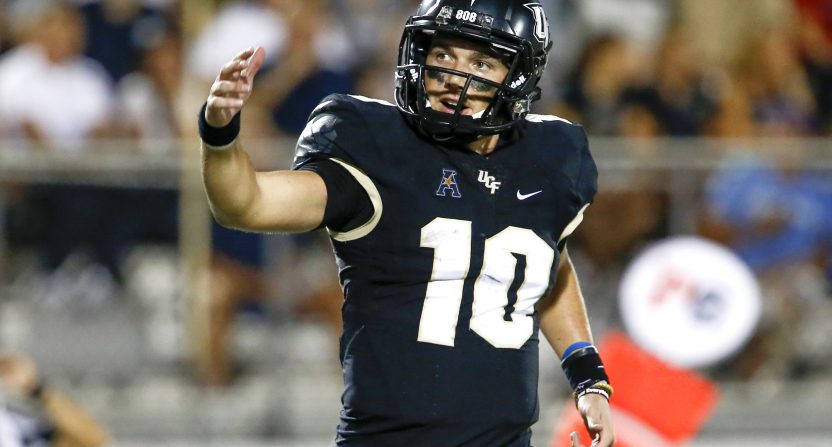 After having a crack at an ACC opponent wiped out by Hurricane Florence last week, UCF was ready for a bit of a challenge from Lane Kiffin and FAU on Friday night. Safe to say, the Knights passed with flying colors thanks to a big night from their Heisman hopeful quarterback McKenzie Milton.

Milton passed for 306 yards and three touchdowns in a 56-36 win against FAU. And if that wasn’t good enough, Milton added a team-high 81 rushing yards and three additional touchdowns on the ground. A six-touchdown night for the junior from Hawaii (who you may have heard was once teammates with Alabama’s Tua Tagovailoa) showed UCF remains the team everyone else in the Group of Five is chasing for a spot in the New Years Six bowl lineup at the end of the season. And if all goes well for UCF, Milton will continue to receive some consideration for a trip to New York for the Heisman Trophy ceremony.

Milton has accounted for 25 touchdowns this season in just three games. The Friday night win against FAU was the second game in a row with three rushing touchdowns. The stats are impressive, of course, even when taking into account the level of competition faced. But for the first time this season, Milton was challenged to respond to a brief amount of adversity. Fortunately for UCF, he did just that with flying colors.

UCF raced out to a quick 14-0 lead on FAU in the first quarter, thanks in large part to being able to orchestrate the up-tempo offense UCF likes to thrive on. FAU really struggled to find a way to stop the engine on the first few drives as Milton and UCF were operating with great poise.

However, FAU actually went on to score 17 straight points. Down 17-14 late in the first half, Milton had one last chance to get the offense back in gear after some quick drives ended without any points. When UCF needed a jolt, Milton was there to provide it with a five-play, 78-yard touchdown drive that took just 1:03 before halftime. UCF could have gone into halftime trailing at home, wondering what went wrong against the Owls. Instead, Milton and UCF took a 21-17 lead into the break, then scored three touchdowns in the third quarter to pull away to a comfortable nice win.

A win against FAU will be nice to have if UCF is once again holding the AAC championship belt at the end of the season. As was the case last year, an undefeated UCF would certainly be in the New Years Six once again, but the early part of the season suggests UCF is already in a position where it could suffer one regular-season loss and still have a good chance. A quality win against a team likely to win the Conference USA championship would help, but it would still likely come down to the quality of that hypothetical UCF loss compared to other teams in the running.

For now, it should be a one game at a time approach for UCF. Next up is a home game against the Pitt Panthers. If UCF can notch a win against an ACC team that has a shot of going bowling, UCF will remain in the driver’s seat for a spot in a New Years Six bowl for a second straight year. No Group of Five team has made consecutive trips to the NY6, but UCF has the look of a team ready to become the first.