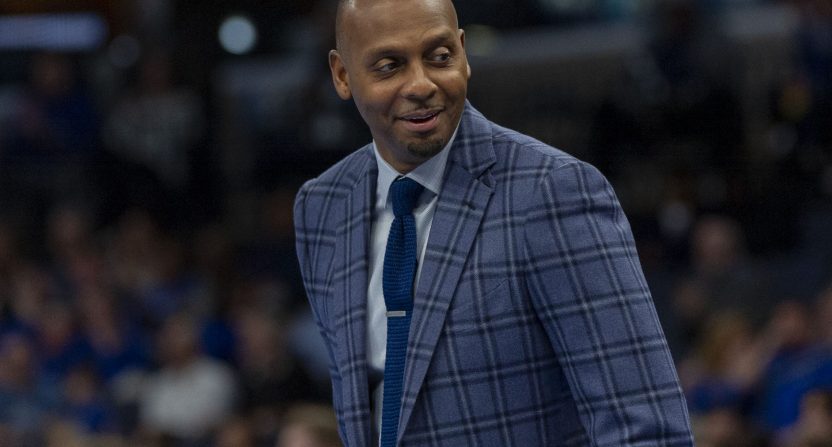 In recent months, the G League has been aggressive in being an alternative for high school basketball recruits, through their “professional pathway program.” Originally, the program offered “elite prospects” contracts worth $125,000. But after news came out that ESPN’s top-ranked prospect Jalen Green signed with the G League, it was reported that these elite prospects could be making $500,000-plus. The bump in potential pay is making the G League an attractive alternative.

Obviously, this isn’t pleasing for the NCAA, who for years was the only game in town after high schoolers weren’t able to just go straight to the NBA. Now there’s competition and some coaches are speaking up, including Memphis head coach Penny Hardaway.

Talking to the media, Hardaway disagreed with the G League’s program. The fact that he disagreed isn’t the story; it’s not a surprise a college basketball coach disagrees with something that it will result in a disadvantage. What is the story is how he described the program, saying it was “almost like tampering.”

“For me, I didn’t think the G League was built – and I could be wrong – to go and recruit kids that want to go to college out of going to college,” Hardaway said. “I thought they were going to be the organization that was going to be, if you want to go overseas or you absolutely did not want to play college 100 percent, that this would be the best situation for you before you go into the NBA.

“But taking guys out of their commitments (or) they’ve already signed and continuing to talk to their parents, it’s almost like tampering. I really don’t agree with that.”

Hardaway might take offense to the G League’s approach and feel people going back on their commitments are wrong, but, despite the G League previously saying they wouldn’t go after already committed players, that didn’t seem like a rule set in stone. For better or worse, the G League isn’t a part of the NCAA, and doesn’t really have to follow their commitment system.

Hardaway did comment on the NCAA’s recent ruling on allowing athletes to make money off of their name, image, and likeness. Hardaway agreed with the idea, but it might not be enough to compete with the G League.

“What the NCAA can do is what they’re doing now,” he said. “Moving in the right steps of allowing kids to make money on their own name and likeness. I’m in favor of the name, image and likeness rule. Because it kind of helps us, as college coaches, kind of fight the battle with the G League and going overseas. It gives a kid a chance to make money (while playing college sports). The college experience, to me, was the best experience of my career in sports.”

“It will affect how we recruit if the NCAA doesn’t do something about it,” he said. “If they don’t keep taking steps forward to help these kids make money, they’re going to take $300,000, $400,000, $500,000 for five months to play on a select team and just do basketball instead of having to go to class.

“(The NCAA) just (has) to take some desperate measures to make these kids understand that we want you to come to college.”

What that tells me- competition benefits the athletes. It’s totally understandable where Hardaway is coming from, the same way it’s understandable that a basketball prospect would feel this is great. It’s not a bad thing for the athlete if another entity is trying to “woo” them, and the G League is trying to do just that.