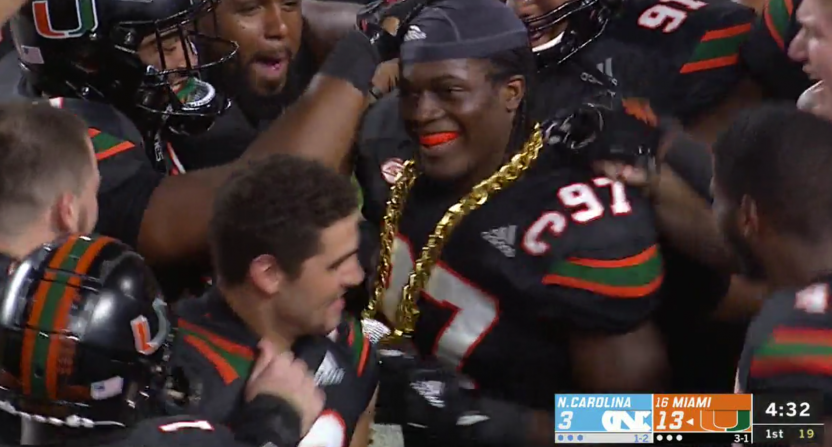 The Miami Hurricanes have a brand-new turnover chain this season, and they had plenty of chances to show off the new bling Thursday night in a 47-10 victory over North Carolina. Miami’s defense was the story of the night with six turnovers and three touchdowns in the win.

The first turnover of the night came on UNC’s second offensive possession of the game. Trailing 7-3, North Carolina quarterback Nathan Elliott was sacked by Shaquille Quarterman for a loss of 15 yards. But if that wasn’t bad enough, the ball came loose and was recovered by Jonathan Garvin, who returned the ball for a short touchdown.

Break out that turnover chain!

Miami would add a field goal on their next offensive series, which cured the defense up for their second turnover, and their second score of the night. This time it was UNC quarterback Chazz Surratt making a costly mistake by throwing the football under pressure. His pass went right into the hands of Joe Jackson, who had a clear path for a 42-yard pick-six. This play demonstrated just how bad a night it was for the Tar Heels, and it was only going to get worse from here.

It was that kind of night for UNC.

A third defensive touchdown would come later in the second half as Miami was shutting the door on the Tar Heels. A second pick-six — this one an 83-yard return by Romeo Finley — to push the Miami lead to 40-10 on the first play of the fourth quarter, made Miami the first ACC school in 12 years to score three defensive touchdowns in a game.

Miami is the first ACC school since Boston College (against Maryland) in 2006 with three defensive touchdowns in a game.

I went to a party tonight and a football game broke out! Our fans are off the chain! U Family!

But just when it appeared the game was over and an equipment staffer started packing away the turnover chain, Miami forced and recovered a late fumble and called for the turnover chain one final time in the final minute.

So what does all of this mean?

It’s a good question. Since dropping the season opener against LSU in Arlington, Miami has now strung together four straight wins, including a road win against Toledo that tends to fly under the radar and now this ACC opener to go 1-0 in conference play. Miami’s defense continues to have the ability to make plays that can beat some opponents into submission, although it’s worth noting this North Carolina team may have been coming in off a win against Pittsburgh, but they also lost to East Carolina. It’s difficult to suggest we really learned much about Miami, but Mark Richt should be happy about the performance of his defense overall. It made big plays, but the Tar Heels also had some offensive highlights that will allow Richt to stress the need to tighten things up at times.

One development that came into play for Miami was the play of quarterback N’Kosi Perry, the freshman who started and played all night instead of Malik Rosier. As we are seeing around the country, teams with quarterback questions in the first month are beginning to make their decisions. Clemson went with Trevor Lawrence. Alabama is going with Tua Tagovailoa. Notre Dame appears to be going with Ian Book. And now, it would see, this is Perry’s opportunity at Miami.

Now 4-1, Miami will prepare for a home game next week against a Florida State team that has been scuffling this season. The Seminoles are vulnerable and could be in trouble against Miami. After that will be back-to-back road games against Virginia and Boston College. Miami is in prime position to take advantage of the schedule and score a few more wins that will help them remain on the playoff radar.