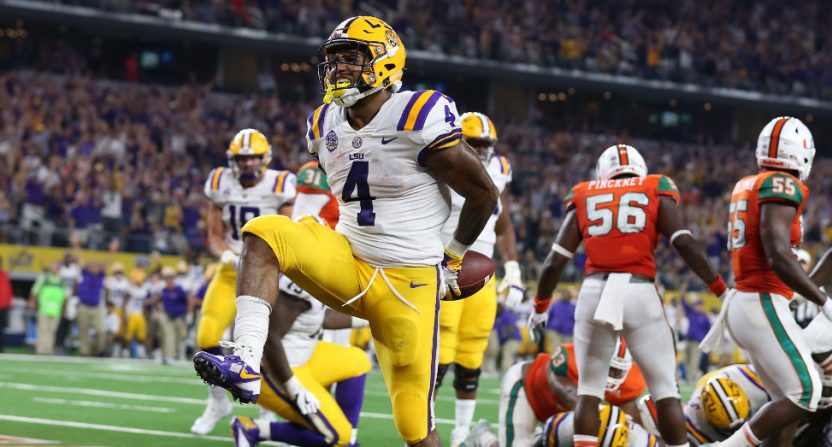 The Miami Hurricanes saw a promising season go up in smoke late last season, and it seems the program was unable to turn the page. Their seemingly-promising 2017 season saw them start with 10 wins but end with a three-game losing skid, dropping them out of the playoff picture and then handing them a loss in a bowl game played in their home stadium. Despite that, though, Miami was given the benefit of the doubt from the voters who believed Mark Richt’s Hurricanes would be able to take advantage of a clean slate on the big stage in Arlington in a top-25 showdown with LSU. It did not take long before reality set in that No. 8 Miami still has some work to do to prove worthy of being on this type of stage, and the Hurricanes were chopped down by LSU, 33-17.

LSU was far from impressive on offense, going just 3-for-16 on third down conversions and putting together a mediocre 296 yards of offense with Ohio State transfer quarterback Joe Burrow making his LSU debut. Burrow (11/24, 140 yards, 14 rushing yards) was nothing particularly special, but he managed the offense well against Miami’s defense and was a key player in making sure the Hurricanes’ signature turnover chain never made an appearance on the sideline. After an early targeting penalty on Miami, LSU’s big strike on offense came in the first quarter on a 50-yard touchdown run by Nick Brossette straight up the middle to give the Tigers a 10-3 lead. LSU’s defense took over from there, forcing three straight three-and-outs followed by an interception of Malik Rosier returned by Jacob Phillips for a 45-yard score to put the Tigers up 27-3 and one more punt before halftime.

At that point, it was pretty much game, set, match for LSU. Miami would eventually put together back-to-back touchdown drives in the fourth quarter, but it was far too little, too late. The damage had been done. The Hurricanes now have to focus on stopping a one-game losing streak in 2018, and not allow the thoughts of carrying the burden of a four-game losing streak going back to last season get in the way.

Richt: "We're going to stay the course, I can promise you that."

The opening loss to LSU showed a few things Miami can work on. For starters, the offensive line needs to improve in a big way if Miami’s offense is going to be able to do anything this season. A line returning three starters from last season was expected to be a weak spot for the Hurricanes. Athlon Sports ranked the Miami offensive line eighth in the ACC, so LSU feasting in the trenches was no shock. Not being able to adjust and find ways to plug things up is what should be alarming, and it is this spot that will prevent Miami from being able to get over the hump if they don’t improve in a hurry. For reference, Athlon Sports ranked LSU’s defensive line sixth in the SEC, so it’s not like it was a huge mismatch on paper in the preseason previews.

Fortunately, it may be a while before Miami’s offensive line faces that much pressure again. Unfortunately, teams Miami will face are well aware of the holes in the offensive line and will work to exploit them as much as possible to get in the face of senior quarterbacks Rosier, who seemed uncomfortable all night and took quite a beating. He completed just 15 of his 35 attempts and he was picked off twice. The pressure may already be on for Rosier, who has had the vocal backing of head coach Mark Richt but has been challenged to improve his game before a possible change at quarterback might be made. But it may not matter if Miami has clones of Jim McMahon or Vinny Testaverde unless the offensive line straightens up (Testaverde’s son is playing QB for Albany after transferring from Miami, in case you were curious).

Richt: "If you're going to lose a game, might as well be the first one. … All our hopes and dreams are still alive. A lot of people will try to bury us, but there's a lot of games left to be played."

Finding positives for Miami is a bit tricky, but like every other team that took a loss this weekend, the season is not even close to being done. Miami still has 11 more games to play, and odds are they will win a good majority of them. But if Miami is going to take the next step in returning to national prominence, then Sunday night in Arlington showed they have a lot of work to do.