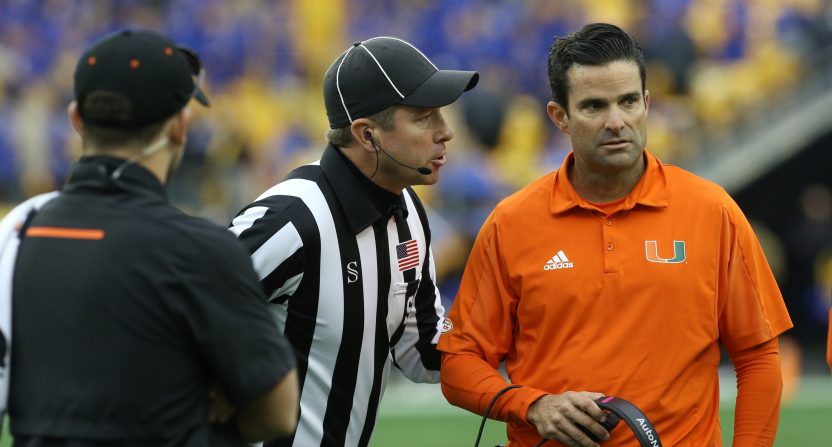 The situation surrounding the Miami Hurricanes football program is quite the mess at the moment, especially if reports from behind the scenes are to be believed.

The school is clearly not happy with the direction of the program three years into Manny Diaz‘s stint as head coach. While the Canes went 7-5 this season, that’s a step back from last year’s 8-3 finish, and the expectations of “The U” mean that people want to see this team compete for ACC titles and national titles. Whether that’s unrealistic or not, it’s what drove the school to fire athletic director Blake James a few weeks back and it’s what is driving a strong internal push to replace Diaz.

Multiple Miami AD candidates told @ActionNetworkHQ UM’s search is a “mess.” With more than 50 board of trustees & several donors involved “everyone is in charge, no one is in charge. They don’t know what they want to do w/Manny (Diaz). Half want him gone, half want him to stay"

Despite fact Miami doesn’t have a permanent AD, the Hurricanes will "make a run at (Oregon coach) Mario Cristobal in coming days,” @flasportsbuzz reports

It’s not unheard of for a school to make a run at another coach while it still has one employed, especially in the wild world of college football. But that still doesn’t make it feel like a good thing. We’ve heard a lot this week about the “classless” way that Brian Kelly walked out on his players at Notre Dame, but the alternative is that a school can just as easily do to you what it’s doing to Diaz, and that’s not sitting well with a lot of people in the college football world.

The way UM is handling Manny Diaz is classless, unprofessional, and disgraceful. Its a prime example of why the program has been in shambles for the past 20 years.

Seems, I dunno, like a poorly run operation at this point.

Someone should tell Manny Diaz https://t.co/JoNU47fj5o

The Miami program and those involved in the process are clowns. I’m not saying manny Diaz is a great coach but you atleast gotta treat the dude respectfully and either end it or announce he’s coming back

Cristobal and Miami feel like one of those pairings that have been destined to happen for years. But the way it’s all going down feels a bit icky. However, as we’ve been reminded this week, all’s fair in love, war, and college football coaching carousels.