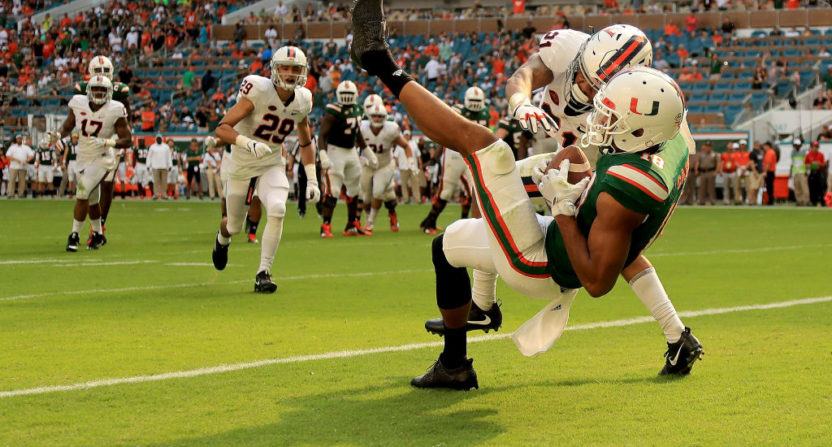 After a defining win like Miami posted over Notre Dame last Saturday, there’s often a bit of a hangover. For Miami (ranked third in the latest College Football Playoff rankings), it lasted well into the second half Saturday at home against Virginia, as the Cavaliers went up 28-14 on the Hurricanes. That threatened Miami’s playoff hopes. But when the Canes woke up, they looked like this year’s Miami once again. With 30 straight points, they outlasted the first of two pre-Clemson tests, and survived despite the target on their back.

Virginia QB Kurt Benkert started the game on fire with four touchdown passes and didn’t bite on most of what Miami’s turnover-forcing defense was giving him. Benkert has only thrown for more yards than today’s 387 twice in his career, both non-conference home wins, and the senior found a way with his leadership and moxie to stun a Hurricanes defense that was not expecting what Benkert brought. The 49th-best pass offense in the land found a way to play much better than that, and with Malik Rosier and Miami’s offense struggling early, there were plenty of warning signs.

But when Benkert made his only real mistake of the game, a 30-yard interception return by JaQuan Johnson that let the Hurricanes bust out their turnover chain, Miami found its rhythm again. That made the game 28-28, and they didn’t look back from there. Virginia actually outgained Miami 439 to 358, but was opportunistic after forced turnovers and a few Virginia special teams mistakes enough to find their mojo again after an uncharacteristically sleepy start, which Hurricanes’ head coach Mark Richt warned against during the leadup to the game.

“I’m not going to sit here and ignore the fact there’s a lot of great things happening here … but we are the same team that started this season grinding and fighting and trying to find ways to win games. And if we forget that, then we are going to find ourselves in trouble.”

Richt was right. After Miami went down 28-14 early in the third quarter with Benkert only throwing one incompletion by that point, many inside Hard Rock Stadium were wondering whether some ugly history for the Canes would come back to haunt them. Not so after Rosier and Travis Homer got Miami’s slumping running game back again, which allowed the Hurricanes to wear out a tired Virginia defense and bleed any hope for a Cavaliers’ upset dry.

While it isn’t quite a “burn the tapes” game for Richt, he’ll need to make sure his Hurricanes don’t start slowly again on the road Friday in Pittsburgh, because they may not be as lucky. But in the end, the Canes are still unbeaten, will be in the Top 4 for the playoff come Tuesday, and probably learned a lesson about what teams can do to them if they aren’t ready, no matter who that team is.

What is for sure is that Miami won’t be overlooking the Panthers on Friday. No matter the hype, no matter that Richt is 10-0 for the first time in his head coaching career, they got a powerful reminder of what can happen if they take a second or two off to look ahead to the biggest games ahead.

But in spite of a scare, the Canes are on track for the playoff still, and know now that they are not invincible against anyone. And that may be the best part of today’s game for a surging Miami Hurricanes squad.