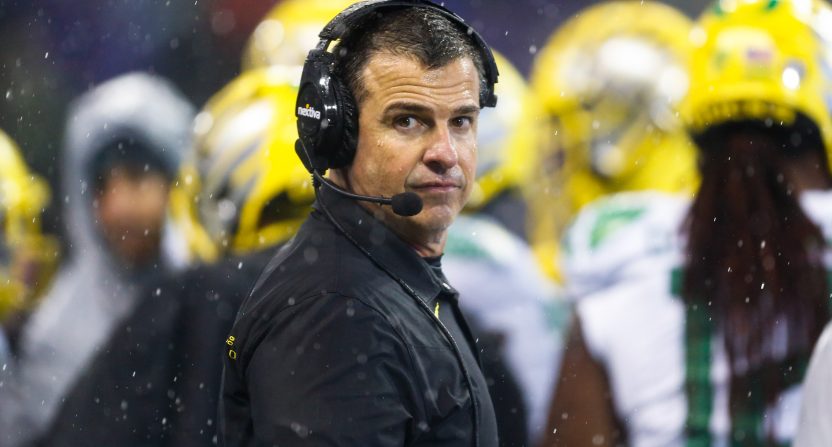 College football exists in a “the-end-justifies-the-means” world. If Mario Cristobal brings the University of Miami back to national relevance, the cutthroat circumstances surrounding his arrival will be mostly forgotten. But as bizarre as this sport can be, this was amazing to watch in real time.

Can anybody remember the last time a university officially announced the firing of a coach and hiring of another on the same day? Exclude interim situations, promotions, and extraordinary circumstances. What Miami did Monday is highly unusual. This coaching change is the latest example of the absurdness and desperation of college football.

We’re not naive. Universities often conduct searches through back channels and third parties before officially pushing the old coach out the door. It’s normally the job of the athletic director to do these inquiries as clandestinely as possible. But we have rarely seen a coaching change unfold this awkwardly. For everyone to see.

The Miami job was in play, and everyone knew it. And it seems like the school administration did little if anything to quiet the speculation. Bold? Yes. Ethical? Um.

Perhaps this would have been managed more gracefully if there was an athletic director in charge. But Miami fired that guy, Blake James, last month. Powerful school officials and big money boosters took over. They threw a ton of cash at Cristobal (10 years, $80 million) and paid Manny Diaz $8 million to go away. An unprecedented spending spree for Miami.

America! What a country.

Miami has never come close to paying this kind of money. This is a complete shift in athletics and football support.

Some might insist that what happened to Diaz was karmic retribution for how he left Temple at the altar. In December 2018, Diaz was hired as the Owls new coach. But when Mark Richt abruptly retired at Miami weeks later, Diaz reversed course and took over the Hurricanes. That was unfortunate and unfair to Temple.

Nobody deserves that kind of embarrassment. It doesn’t matter how much money you make, it was demeaning. If Miami was that unhappy, it should have simply fired Diaz and moved on. But it let him twist in the wind for all of us to see while it pursued Cristobal.

This wasn’t just any coach. Diaz was born in Miami and served as the Hurricanes defensive coordinator from 2016-18 under Richt. Based on his 21-15 record, you could make the case that firing him was the right decision. But he deserved better.

In a statement, Diaz said: “I am disappointed in the University’s decision and the manner in which this played out over the last few weeks. The uncertainty impacted our team, our staff and their families – these are real people that gave everything to this program. For that, for them, I hurt.”

Miami didn’t care. The Hurricanes are not concerned about feelings or optics. They have reached that level of desperation. In college football, there’s a growing chasm between the haves and the have-nots. Miami hasn’t been a viable national championship contender in two decades. Since joining the ACC in 2004, Miami hasn’t even won the league.

The Hurricanes’ most notable contribution to the college football conversation in recent years has been the turnover chain. That’s difficult to accept for what was once the greatest modern football dynasty with five national championships. The way people talk about Alabama football now is the way people used to talk about Miami. Except The U won with swagger.

Those days have become a fading memory. Nostalgia played a role in what happened to Diaz and what will be expected from Cristobal. Miami just paid a fortune for a guy with a 62-60 career record. But there’s reason for optimism. Cristobal is Miami-born and a Miami alum. He was an offensive lineman for the Hurricanes who won a pair of national championships (1989 and 1991) when he was there. He has been an assistant coach at Miami. Nobody understands the environment better than him.

Cristobal took over a difficult job at Florida International and led them to a pair of bowl appearances. After spending four years as a Nick Saban assistant at Alabama, he took over Oregon. With the Ducks, he went 35-13. He’s leaving the program after a 10-3 season.

“This program has an unparalleled tradition and an exciting future ahead of it,” Cristobal said in a statement. “I can’t wait to compete for championships and help mold our student-athletes into leaders on and off the field who will make our university, our community, and our loyal fan base proud.”

He’d better. If not, Cristobal could find himself on the wrong end of a messy coaching change.