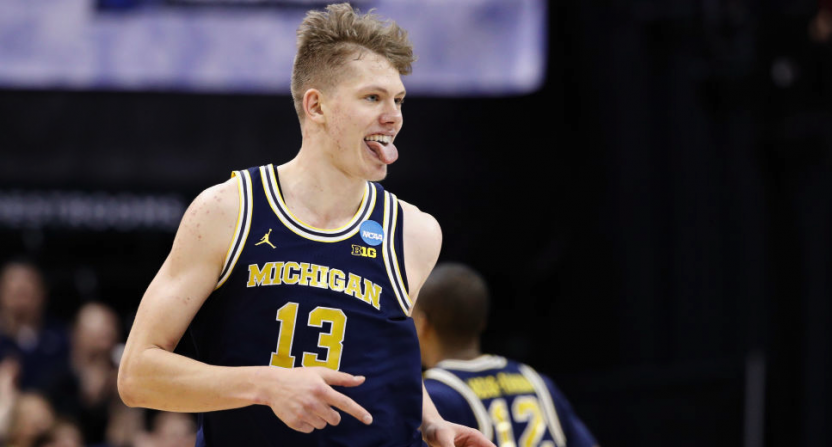 Moritz Wagner shouted in jubilation in front of the Michigan fans before falling to the floor in celebration.

He is the Michigan Man of the moment as the Wolverines’ magic postseason ride continued. The No. 7 seeded Wolverines upended No. 2 Louisville to advance to the Sweet 16 of the Midwest Region. They will roll into Kansas City with momentum – winners of seven in a row – thanks to ‘Mo.’

Michigan coach John Beilein hitched his offensive wagon to Wagner. The 6-foot-11 sophomore rewarded him with the game of his life. Wagner scored a career-high 26 points on 11-of-14 shooting. The mobile big man from Germany had 17 points in the second half as Michigan rallied from a nine-point deficit.

“I just let the game come to me,” Wagner said. “Don’t force anything and see what happens. Today, I got a couple easy ones early. Therefore, my confidence level was high.”

Michigan – somehow, someway – won a game when it was just 6-of-17 from 3-point range. It’s one of the most prolific shooting long-range teams in the country and was 16-of-29 from the arc on Friday to beat Oklahoma State, 92-91.

“People think we’re a 3-point shooting machine,” said Beilein whose team shot 63 percent in the second half. “You can’t do that anymore. We’ve worked hard to play one-on-one in the post. People are sticking with our shooters.”

If you would have told Louisville coach Rick Pitino that his team would allow only six 3-pointers, he would have gladly taken it. Louisville was so terrified of Michigan’s shooting that it crowded the arc. The Cardinals were simply not going to allow the Wolverines to beat them from the perimeter.

Sound strategy. However, when you’re that hell-bent on preventing 3-point shots, you’re going to be vulnerable elsewhere. You can’t guard the entire court. The Cardinals’ game plan created natural driving lanes inside the arc, and Michigan took advantage of that.

More specifically, Wagner took advantage of that. He posted up smaller players in one-on-one match-ups and drove quickly to the basket. Wagner is exactly the kind of big man Beilein covets. He’s not a lumbering frontcourt player. He moves smoothly and has range. Wagner is the type of big man few programs have – and his style is tough to simulate in practice.

“Mo just has the mentality of he’s not scared in the moment,” junior forward D.J. Wilson said. “I think you definitely saw that today. Down the stretch, when he got the ball, he knew he was going to make a play, and we watched him. He executed well down the stretch. That was big, a big confidence boost.”

Credit Michigan for making the adjustment. Sometimes in individual games, you can’t be stubborn. It was clear that the Wolverines weren’t going to be able to bury Louisville under an avalanche of long-range shots. The Cardinals have too much length and size. Their physical advantage kept Michigan to just 3-of-11 on 3-point shots.

Derrick Walton Jr., Michigan’s best player, was completely stifled. He was just 1-of-8 from the field in the first half and finished 3-of-13 for only 10 points. But that’s what Pitino does. He’s always been a master at taking away your best player.

This time, Beilein’s squad rallied by flipping the script on Pitino.

When your team is ???, the water gun is the only way to cool off pic.twitter.com/aSyVxUXENs

In the second half, Michigan didn’t take a 3-point shot until midway through the period and attempted just six in the second half. Instead, the Wolverines kept feeding to the ball to Wagner, who took advantage of Louisville being caught in switches.

Louisville was eighth in the nation in the KenPom defensive efficiency ratings.

“We made some bad switches by not communicating,” Pitino said. “(Center) Mangok (Mathiang) was trying to tell the guards to get over it so we didn’t have to switch. We wanted to switch going toward the perimeter, not going to the basket. We made some poor switches.”

And when Michigan did take 3-pointers, the Wolverines were efficient. They converted half of their six second-half 3-point tries. The first 3-point shot of the second half came from Wilson with 10:33 left to play, cutting what was once a 47-39 deficit to 50-49. The second – by Wagner – put Michigan ahead for good 58-55 and one from Walton Jr. made it 61-57 with 5:52 left.

“We always believed in ourselves, not only from a shooting respect, but also on the defensive end and in the paint as well,” Wagner said. “So, yeah, I’m very happy. I just said that to Coach B, we only shot six 3s today and we won. So it’s awesome. We played gritty basketball, and I think we can be proud of that.”