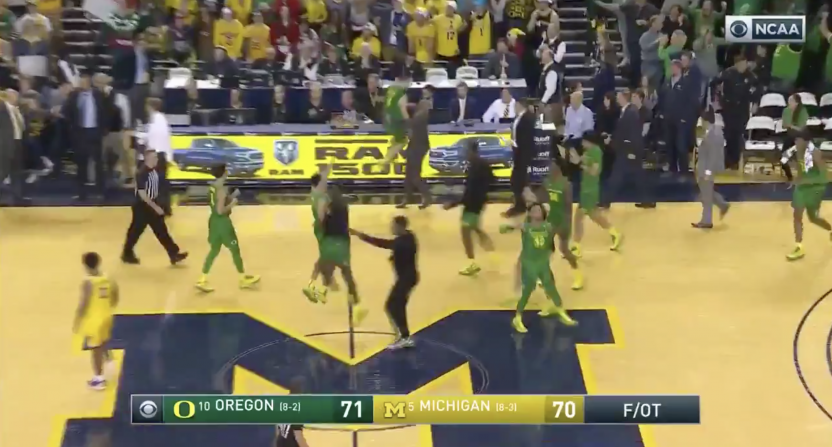 It was an early runaway by Oregon but throughout the game, Michigan bounced back and gave us an exciting finish. In the end, it would be Oregon prevailing in overtime to win the top 10 matchup 71-70.

The beginning of the game was all Oregon and they did so by shooting from deep. Oregon was ahead by as much as 16 and within that first 14 minute stretch, Oregon went 5 for 9 from three, largely thanks to Anthony Mathis. Michigan wasn’t faring as well as they went 1 for 9 to start.

The Wolverines clawed back though and knowing they had time on their side, staged a comeback against the 10th ranked team in the country. Along with Oregon cooling off a bit, Michigan adjusted their game and went more inside while finding more efficient three point shots. The result was Michigan scoring more, especially Franz Wagner and Isaiah Livers shooting from deep, and narrowing the margin down to eight by halftime. Michigan didn’t let up in the second half as they took the lead with 7:51 left in regulation.

.@umichbball takes their first lead since 19:09 in the first half. We are ROCKING here in Ann Arbor. pic.twitter.com/Mf5RE65byf

The rest of the game became a series of dueling uppercuts. When one team would go on a run, the other team would answer right back. Tied 63-63, Oregon had a chance to win but after Payton Pritchard had trouble getting his shot off, Mathis had to heave up a quick three from way downtown. Mathis drained the shot but time ran out and we would get free basketball.

WE ARE HEADED TO OVERTIME! Anthony Mathis' game-winning long ball was wiped away after further review showed the ball did not leave his hand before the final buzzer.@OregonMBB | @umichbball pic.twitter.com/cKsjODRsTs

Moving toward the end of regulation and into overtime, Payton Pritchard ran the Oregon offense. Driving inside and having the strength to get where he wanted, Pritchard at one point scored 13 consecutive points for the Ducks and really kept them in this.

After a review ruled Michigan had 11 seconds to find a winner. Down one, Zavier Simpson went in for the layup but the ball bounced off the rim and Oregon took an important road victory.

Zavier Simpson's runner is no good! @OregonMBB goes into Ann Arbor and wins it 71-70 in overtime. pic.twitter.com/hUW9iULQkC

It can be tough to get into December college basketball but the homestretch of this game really had people on the edge of their seats. It could’ve been a blowout but Michigan came back to make it a game. And in the end, we got an exciting finish in both regulation and overtime. It’s a great preview of what to expect in March.