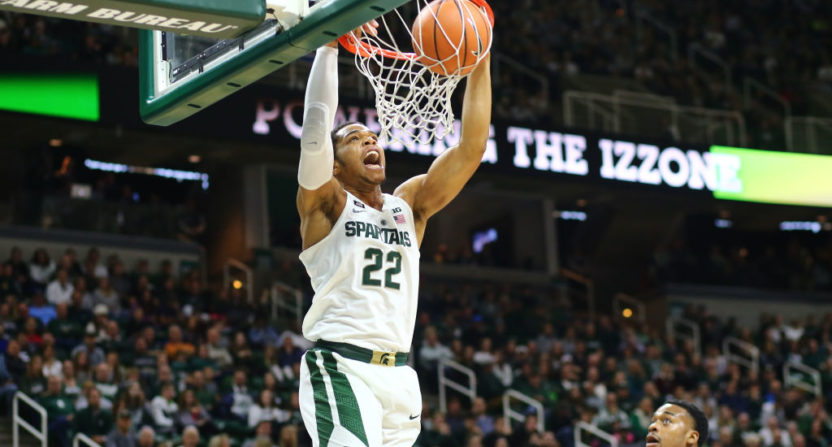 The Big Ten/ACC Challenge was a giant mess for the Big Ten, but the event ended on a positive note for the conference. On Thursday, No. 3 Michigan State eased past No. 5 Notre Dame 81-63 putting to rest any doubt that this team belongs among the seven favorites to win the national title.

Duke, Kansas, Villanova, Texas A&M, Wichita State, Florida and now Michigan State. I’d be surprised if someone outside of that group of seven cuts down the nets in April.

Although many people ran with Michigan State as a preseason title pick, there were reasons to be cautious about this team. The Spartans would obviously be good, but would they be great? As much talent as this team had entering the season, their best players were forwards, their guards were more or less average, and they weren’t anything ultra-special when Bridges was healthy last year. They went 10-10 once Bridges returned in January and rose from 47th to 40th in KenPom.

Sophomores Cassius Winston and Nick Ward have improved their ball-screen defense, although there’s still plenty of room for further improvement. Joshua Langford’s jumper has been insanely wet. Freshman forward Jaren Jackson Jr. has been arguably the team’s best player, and that’s no disrespect to Bridges, who’s settling for too many jumpers but has looked like the National Player of the Year candidate we expected nonetheless.

Above any individual player, Michigan State’s team defense is downright nasty. After some mediocre defensive performances early on, the Spartans have allowed 0.80 points per possession in their last four games, including two wins over KenPom top 15 teams. On Thursday they became the first team this year to hold Notre Dame under one point per possession. In fact, no one had done that since Georgia Tech last February.

Michigan State still has its flaws. Even against a Notre Dame team that doesn’t force many turnovers, The Spartans coughed it up in more than 20 percent of their possessions. And that was still significantly better than their season average, which now sits at 22.4 percent to rank 295th in the country. Also, for a team with so many skilled bigs that are so tough to handle, Michigan State doesn’t get to the foul line much. Even so, pretty much every team in the country has flaws this early. After all, we’re just turning the calendar to December.

But speaking of how young the season still is, the Spartans have already managed to convincingly win two games against teams with Sweet 16 potential and take home the title at the most competitive November tournament. Michigan State has already grown significantly in the two weeks since losing to Duke. Considering the pairing of this squad’s talent and Tom Izzo’s coaching, that’s a scary sign for everyone else because this team still has three more months to get even better.

We won’t get to see the Spartans against good competition for a while now. After opening Big Ten play against Nebraska and Rutgers, they close non-conference play with six straight home games against mid-majors. Amazingly, KenPom has Michigan State as a double-digit favorite in its next 14 games, including eight Big Ten games. That says a lot about the pile of garbage that is the Big Ten this year, but it also speaks to Michigan State’s potential for domination.