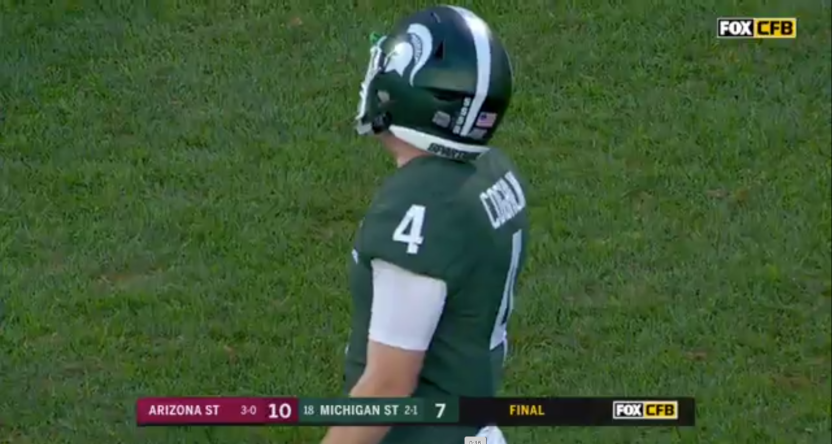 Michigan State and Arizona State may not have provided much in terms of entertainment for about 55 minutes on Saturday in East Lansing, but the roller coaster of emotions in the final minutes was certainly more than enough to make up for it. And a special teams gaffe by the Spartans took a game that appeared destined for overtime into a soul-crushing loss for the home team.

Arizona State’s defense had done their part all game long, but the Sun Devils had no answers for the Michigan State defense. That is, of course, until Jayden Daniels found his groove in the final minutes of the fourth quarter. Daniels led Arizona State on an 11-play touchdown drive that spanned 75 yards (bringing Arizona State’s total offensive production to 216 yards for the game). Daniels took advantage of plenty of room to run as the Spartans focused on covering Arizona State’s receivers down the field. Daniels took off for a 15-yard run on a 4th & 13 from the Michigan State 28-yard line, and a few plays later he picked up seven on a 3rd & 5, which all led to Eno Benjamin scoring from one yard out to give Arizona State a late 10-7 lead in Spartan Stadium.

With one last chance to either take the lead or send the game to overtime, Brian Lewerke and the Spartans were gifted 15 yards on a pass interference penalty and a 25-yard passing play to move Michigan State to the Arizona State 29-yard line. That set Matt Coghlin up for a 42-yard try, which he made.

After the correct call was made on the field, the ball was moved back five yards and Coghlin had to wipe away the wild show of emotions that ran through him and the stadium just minutes earlier, and try a 47-yard attempt. This one did not go so well.

But wait! There’s more! After the game, on the FOX postgame show, rules analyst Dean Blandino said Arizona State should have been flagged for a leaping penalty on the second field goal try. Flagging Arizona State for the penalty would have moved the ball 15 yards closer and given Michigan State a third shot at tying the game. And at first glance, it sure looked like we were heading to overtime in East Lansing.

Dean Blandino says ASU should have been flagged for leaping on final MSU FG try https://t.co/Dc6ychH6Hi

Perhaps your interpretation of whether or not the Arizona State player was moving at the snap depends on what school-colored goggles you are wearing at the time, but you have to imagine this is a call that will be reviewed in the coming days by the Big Ten. It won’t change anything, but they’ll be taking a closer look at the debatable missed call.

In any event, Herm Edwards has a nice little 3-0 team in a conference that is losing undefeated teams by the week (USC went down today). Meanwhile, Michigan State still has plenty to look forward to once Big Ten play gets going, but the Spartans have plenty of room for improvement with the offense.

And their ability to count to 11, apparently.