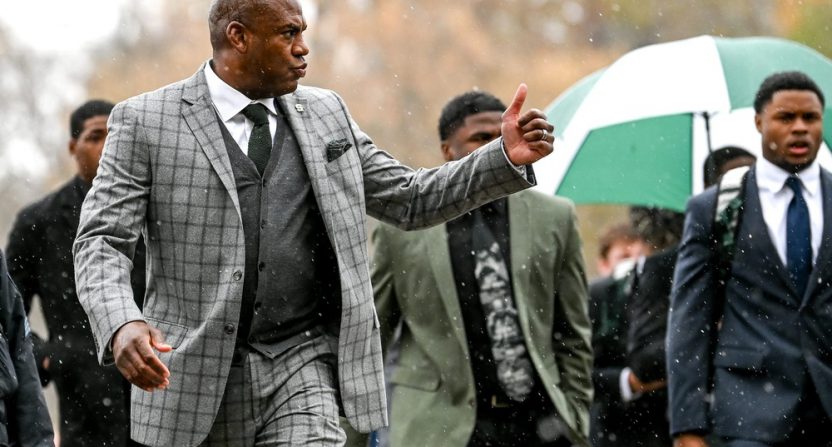 While the Michigan State Spartans might not be as hyped as they were a few weeks ago after beating Michigan, head coach Mel Tucker appears ready to get paid for his efforts.

Tucker, in his second season as the head coach of the Spartans, has quickly turned the program around, garnering a 9-1 record and a No. 7 ranking so far. The program still has a chance to make it into the College Football Playoff if they can win out on the regular season, which includes at No. 4 Ohio State this weekend, and then win the Big Ten Championship Game. But even if they fall short, it’s been an exciting run that has rejuvenated the fanbase and reminded folks that Michigan State is a competitor in the conference.

It’s also drawn a lot of attention to Tucker, whose name has come up in various head coaching searches around the country. Specifically, his name has come up for the LSU Tigers, which is the kind of program that someone might leave Michigan State for (see: Saban, Nick). Because of that, Michigan State has been reportedly hard at work on Tucker’s contract to make sure he doesn’t have many reasons to leave so soon.

The deal, if approved, would surpass the roughly $7 million/year contract that James Franklin has with Penn State. In fact, the only coaches who currently have higher per-season deals than this would be Alabama’s Saban ($9.753 million) and LSU’s Ed Orgeron ($9.012 million), though Orgeron is on his way out after he and the school reached an agreement.

Tucker’s current deal nets him $5.632 million in total compensation this year, good for fourth among Big Ten coaches. He signed his original deal with MSU after coming over from Colorado in early 2020 to replace Mark Dantonio.

The flip side for Tucker is that the expectations for the Spartans are going to be through the roof from here on out. If he’s going to be making more than Michigan’s Jim Harbaugh, Tucker needs to keep beating him. And if he’s going to make more than Ohio State’s Ryan Day, he better put the Spartans in the CFP consistently. The bar has been raised in East Lansing.