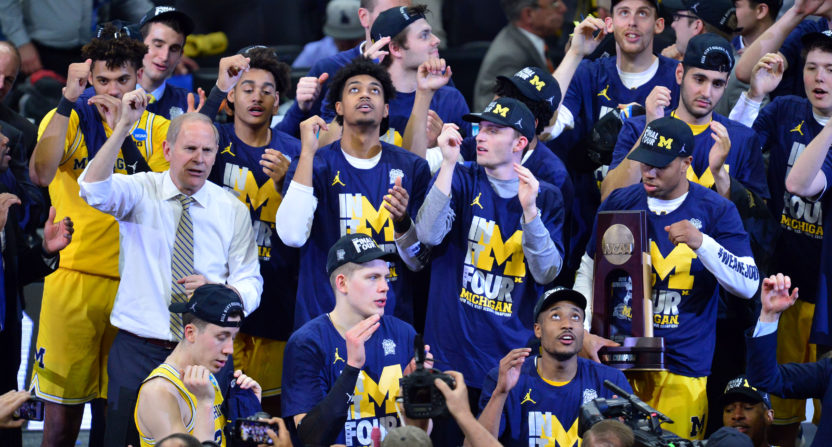 The No. 3-seed Michigan Wolverines just beat the No. 9-seed Florida State 58-54 in an Elite Eight game that wasn’t very pretty.

But Michigan doesn’t care how ugly it was (and head coach John Beilein is surely proud of their defensive effort, at least); a win’s a win and they’re going to San Antonio to play in the Final Four. The victory was also a program-record 32nd win on the season, a pretty notable accomplishment for a storied program.

Michigan’s going back to the Final Four pic.twitter.com/dPsfigXDSW

The Final Four berth is Michigan’s first since 2013, and their eighth in program history.

And in the Final Four, the Wolverines will meet the tournament’s Cinderella, No. 11-seed Loyola-Chicago. The Ramblers continued their stunning run with their best performance yet in a 78-62 win over Kansas State on Saturday. Vegas has Michigan opening as a 6-point favorite vs Loyola:

So, we know that Loyola-Chicago and Michigan will represent half of the Final Four, and we’ll find out the additional two teams on Sunday after the Kansas-Duke and Villanova-Texas Tech games.

Here’s some more of what Twitter had to say about Michigan’s win:

Congratulations on the big 〽️ win & trip to the Final Four! Fun to watch our team, expertly coached, extremely talented & great Team chemistry! Familar territory for Michigan teams coached by @johnbeilein. Proud of the way the fans & the team represented our great university.

John Beilein is one of the best coaches in the country. Period. What Michigan has done the last two years in nothing short of remarkable. @umichbball

Duncan Robinson finished with 7 points. Michigan improves to 28-0 when he scores 6+ points this season.

John Beilein wins with class and he wins the right way. There is no coach that I’d rather have at Michigan. #GoBlue

Michigan’s Duncan Robinson is headed to San Antonio for the Final Four.

Those names have a pretty good track record in that city. pic.twitter.com/5TClbbwv9e