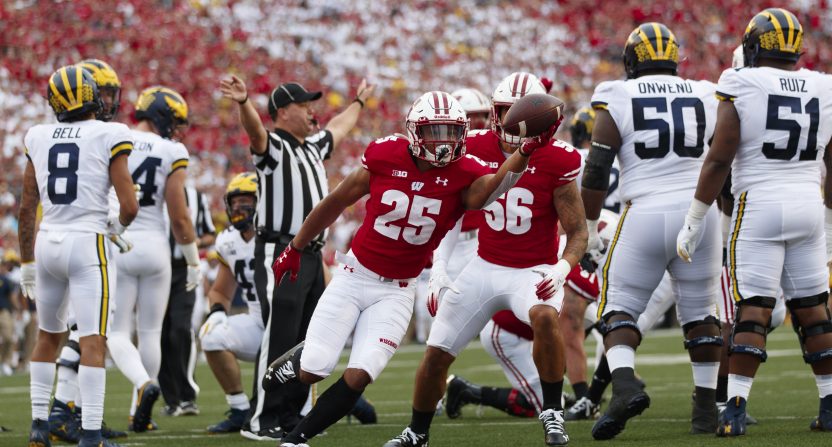 The Michigan Wolverines were supposed to see a major upgrade in their offensive system this season. Instead, the program continues to look as rough on offense as they ever have under Jim Harbaugh. All of their warts in the Michigan offense were on full display in their Big Ten opener at Wisconsin during a 35-14 loss to the Badgers that wasn’t even that close.

The offensive line was in disarray. The defense had no answers to stop the run. Even when Wisconsin had to play without Heisman Trophy hopeful Jonathan Taylor for the entire second quarter, Michigan still could not come up with a stop on the ground.

Late in the first half, after Michigan was unable to get some points before halftime, Wisconsin took a commanding 28-0 lead on a Jack Coan touchdown run right up the middle and essentially sealed the deal on a dreadful day for UM.

It should also be noted that by holding Michigan scoreless in the first half, the Badgers had put together a 145-0 run to start the season that cemented their status among the nation’s top teams.

#Wisconsin had outscored opponents 145-0 prior to TD by #Michigan

Michigan brought an end to the impressive scoreless streak in the second half but it was merely a formality at that point.

By the time the game was over, it was clear that this was yet another stain on the Jim Harbaugh Era at Michigan, where the numbers continue to look corrosive.

Michigan under Jim Harbaugh:
~0-4 against Ohio State
~1-9 vs. top-10 opponents
~0-7 as an underdog
~1-6 on the road against ranked opponents
~Five losses by at least 21 points, including three of their last five games

This is Year Five under Harbaugh at Michigan and, to be fair, there are actually a lot of positive things going on within the program that are improvements on previous regimes. But for the price of Harbaugh’s contract, the ultimate results still feel as distant as they have been from the beginning.

The biggest assumption this season was that Michigan’s offense was going to kick things up a few notches with the addition of offensive coordinator Josh Gattis from Alabama. However, the struggles of the Michigan offense have been a brutal reminder that you can change the coach and the system, but until you have the players you need to effectively run that new offense, it will be tough sledding. This appears to be Michigan’s biggest problem right now and it is one the Wolverines simply have to find a way to fix.

What do all the great coaches say?

The issue is that this problem may not be fixable quickly enough. To run the style of offense Gattis wants, it requires time for recruiting and player development. For now, Michigan is still built for a power running game, but even that backfired on them in the first quarter on Saturday. After a big pass play by Shea Patterson put them in the red zone, Michigan reverted back to their old power run game against a team perfectly suited to match up against that style. Ben Mason, who had been a touchdown machine inside the red zone for Michigan before this year, got his first carry of the season.

So what exactly is Michigan trying to be? A team that will open things up for the offense and let Patterson sling it? Or a team that will be content to keep things on the ground and bulldoze the opposition? If Michigan is going to rebound and be a Big Ten title contender, then it must establish its identity and quickly.

Michigan still has plenty to rely on to win the majority of their football games, but the schedule also includes showdowns against Iowa, Penn State, Notre Dame and, of course, Ohio State. Already 0-1 in conference play, the Wolverines are looking to catch up. If Saturday was any example, the last thing Michigan wants to be doing is playing from behind.